The LA Phil embarks on a global tour that commences in March 2019 with seven dates in Seoul, South Korea, and Tokyo, Japan, as part of the Los Angeles Philharmonic’s Centennial celebrations. With performances on three continents and residencies in seven cities, the tour will then pick up in the fall of 2019 with visits to Mexico City, Mexico; London, England; and Boston and New York City, U.S.A.

I saw Williams in London in 1998 – all four nights and the open rehearsal. I thought that was my one and only chance for a Williams concert experience being from Australia and now living in Korea. I also thought that a Williams concert without the man himself would pale in comparison to a concert with him. Sure, there’s something extra magical about seeing him conduct his own music either for a full concert, a couple of pieces, or just being present. I have to say that although I would have loved it if Williams had been there, the concert was just as enjoyable and memorable for me as the London concerts.

Except for one horrible issue that affected just the area I was sitting in – the staff let a continuous stream of late arrivals in to the most expensive area from the quiet moments of Close Encounters through to Harry’s Wondrous World, and I could hear the footsteps of the female ushers who were wearing highish heels and walking on concrete. They seemed to do a lot of unnecessary walking. A couple of times I could hear ushers speak into their headsets. It really took me out of the moment not once, not twice, and not thrice. if I had been sitting five or six seats to the left, I might not have noticed. I was xxxxing pissed. I was tempted to throw something not too heavy at them – my bottle of water came to mind, but I behaved. A few people including myself spoke to the ushers about it at intermission. They apologized and said there were traffic jams. It’s Seoul, there are always traffic jams. That’s what the subway is for. Oh well, it was a stadium and not a concert hall. And actually I was annoyed at myself for getting so annoyed. Thankfully, all was quiet for Schindler’s List, and after intermission, as promised, there were no more high-heel walking and talking ushers and no more streams of late arrivals. Probably because everyone had arrived by then. Having said all that, the ushers probably would have been assaulted had they not let all those people in.

Anyway, that was just bad luck to be sitting next to that walkway – and our seats weren’t the cheapest. Second most expensive if memory serves. Back to more positive experiences. From the credits music of “The Throne Room” until the end, the big screen showed a montage of pictures from the scoring sessions from 1977 through to The Last Jedi. That was really quite touching seeing Williams conferring with George in 1977 and still recording Star Wars music in 2017. Was that done at the LA concert? And of course he’s written more Star Wars music since The Last Jedi.

Prior to that, during the Throne Room music, a montage of scenes from each of the eight films was shown. Perhaps my bias and age is showing, but each scene from the prequel trilogy just made me cringe while footage from the recent two films didn’t seem out of place alongside footage from the original trilogy. Each of the last pieces from the franchise suites (Star Wars, Indiana Jones, and Harry Potter) featured footage from their series. I’m more of music fan than a film fan, but I did enjoy those montages. It was nice seeing Daniel Radcliffe change over the course of the eight films. And the two sword fighting moments from Raiders and Temple of Doom were shown back to back. That was nice. Couldn’t help but laugh even though I’ve seen those scenes dozens of times.

For the rest of the pieces, the giant screen showed the orchestra and conductor. And it was obviously well planned as whenever someone played prominent parts, they appeared in close-up. By the end, I felt I knew some of the players. And I recognized Thomas Hooten, who was on screen a fair bit and played perfectly all night. I enjoyed watching Dudamel conduct. Full of energy and enthusiasm, and I just couldn’t help but smile at a circular movement – ala an Olympic gymnast doing a ribbon routine thing – that he made during the Scherzo for Motorcyle and Orchestra a couple of times. And that new ending sounded more fitting than my first listen a day ago when it took me completely by surprise.

At the London concerts, Williams played neither The Imperial March nor Superman (can’t complain about what was played though – well, Sabrina was probably the lowlight, as nice as it is), so it was great to experience those live. And I thought the sound was fantastic. Louder than I was expecting but crystal clear. Schindler’s List was just as moving as I remember from the London concerts. Memoirs of a Geisha was just as beautiful.

And yes, the Jurassic Park intro was the same as the CD with the second phrase of that opening melody quieter and sounding different. Not sure what he did differently, but the horn player was on screen and I think he was the only one playing. I thought that an odd change. I also would have preferred the main hymn start just with the strings. Horns playing it from the start didn’t sound right to me. Small things. As I said earlier, I enjoyed the Adagio more than the few times I had previously listened to it. It was really quite heart-wrenching.

Another side note, my date for the night is from North Korea. We haven’t talked about her life there, and I’m not even sure how old she was when she defected, but she had seen some of the films and recognized quite a few pieces although she wasn’t familiar with the name John Williams. There’s definitely at least one new Williams fan in the world. She just told me she wants to see Schindler’s List to get some context for the music, which was the highlight for her. I told her it’s a great film that’s hard to watch in parts. I said that to someone who may have seen real executions in person.

Final comment before bed, the concert’s title was “Celebrating John Williams”. I can’t think of a more apt title. And Superman to finish was just amazing. It just seemed to fly by in a few seconds. If Thomas or anyone else from the orchestra are reading this – a big thank you for coming to Seoul!

And that’s my longest post here and I’ve been here since the beginning, one year after those London concerts. Surreal to think that in 1998 Williams had only scored three Star Wars films and zero Harry Potter films. 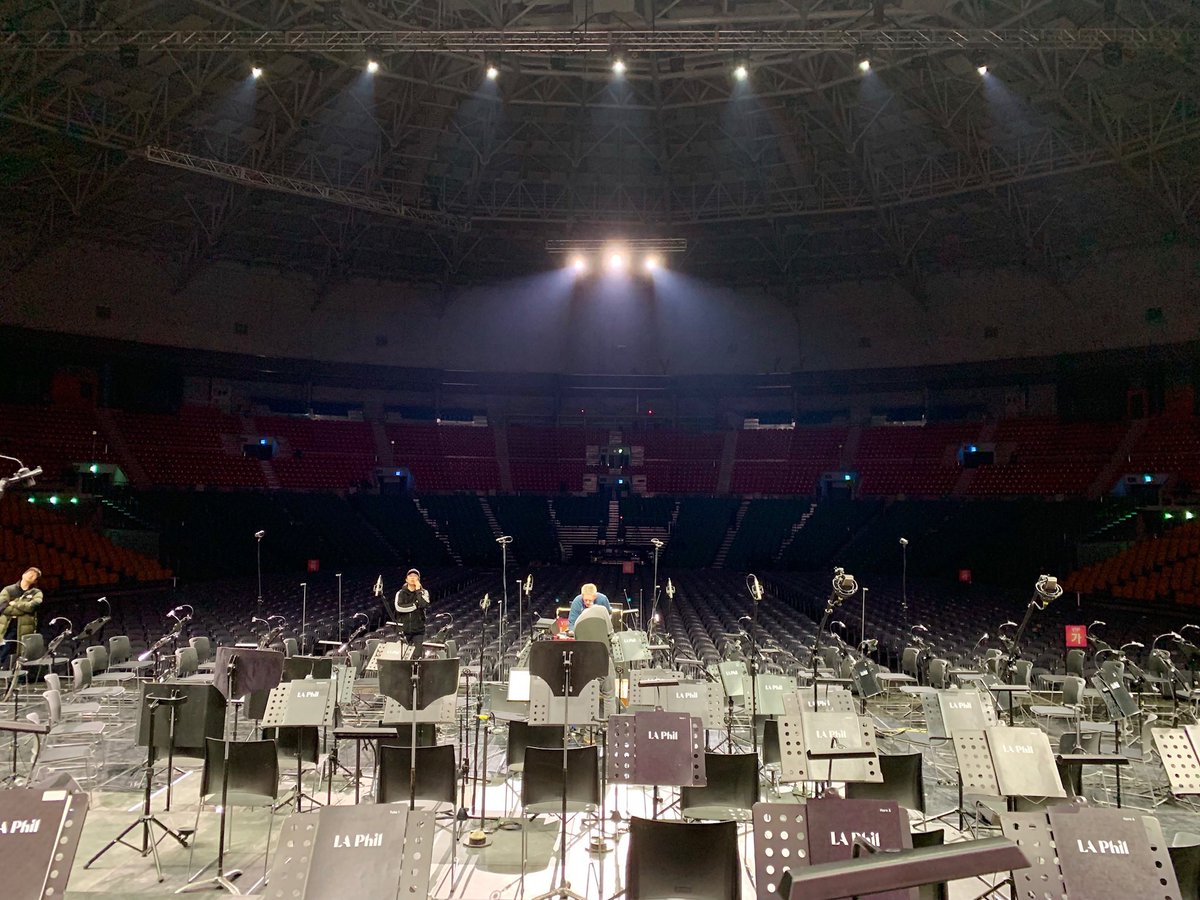 Gustavo Dudamel at a press conference in Seoul on Friday, March 15

← Video: John Williams and Gustavo Dudamel Discuss Movie Music
‘Super Orchestra: the LSO and the Music of Superman’ – New Article at The Legacy of John Williams →