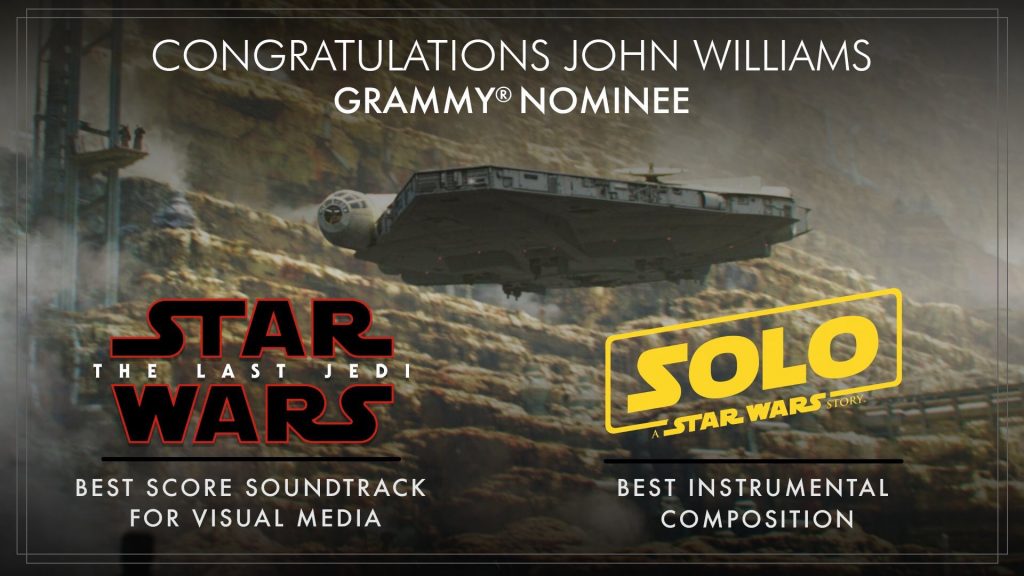 John Williams’ score for Star Wars: The Last Jedi has been nominated in the Best Score Soundtrack for Visual Media category for this year’s Grammy Awards, presented to works released between October 1, 2017 and September 30, 2018.

Williams also shared a nomination with John Powell in the Best Instrumental Composition category for the track ‘Mine Mission’ from Solo: A Star Wars Story, which was written by Powell but included Williams’ theme for the title character.

Category 60 – Best Score Soundtrack For Visual Media
(Award to Composer(s) for an original score created specifically for, or as a companion to, a current legitimate motion picture, television show or series, video games or other visual media.)

Category 62 – Best Instrumental Composition
(A Composer’s Award for an original composition (not an adaptation) first released during the Eligibility Year. Singles or Tracks only.)

Additionally, the Dallas Winds engineers were nominated for their John Williams album John Williams At The Movies in the category Best Engineered Album, Classical.

The 61st Annual Grammy Awards ceremony will be held on February 10, 2019 at the Staples Center in Los Angeles.