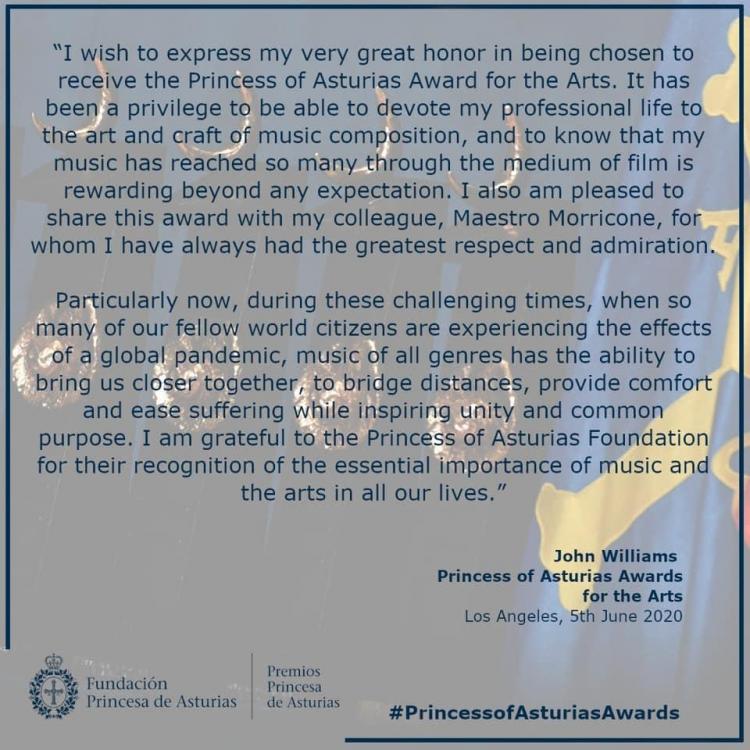 Composers Ennio Morricone and John Williams have been granted the 2020 Princess of Asturias Award for the Arts, as announced June 5 by the Jury responsible for conferring said Award.

Due to the health emergency caused by the COVID-19 pandemic, the meeting was held online via video conference.

Through their power of communication and evocation of images, stories and situations, film scores have often transcended the films for which they were created. The countless compositions that Morricone and Williams have written have not only served as a backdrop to accentuate atmospheres or define characters, but have gone beyond the silver screen and managed to perfectly mix the wealth of musical history with the sound of their time, without forgetting their own idiosyncrasies.

As stated in the Statutes of the Foundation, the Princess of Asturias Awards are aimed at rewarding “the scientific, technical, cultural, social and humanitarian work carried out at an international level by individuals, institutions or groups of individuals or institutions”. In keeping with these principles, the Princess of Asturias Award for the Arts shall be aimed at recognizing “the work of fostering and advancing the art of film-making, theatre, dance, music, photography, painting, sculpture, architecture or any other form of artistic expression”. This year, a total of 42 candidates from 21 different countries were nominated for the award.

This is the second of eight Princess of Asturias Awards, which are being bestowed this year for the fortieth time. The Princess of Asturias Awards for Concord went to Spanish health workers on the front line against COVID-19. The remaining awards will be announced in the coming days in the following order: Communication and Humanities, Social Sciences, Sports, Literature, Technical and Scientific Research and International Cooperation.

Each of the Princess of Asturias Awards comprises a Joan Miró sculpture representing and symbolizing the Awards, a cash prize of 50,000 euros, a diploma and an insignia.