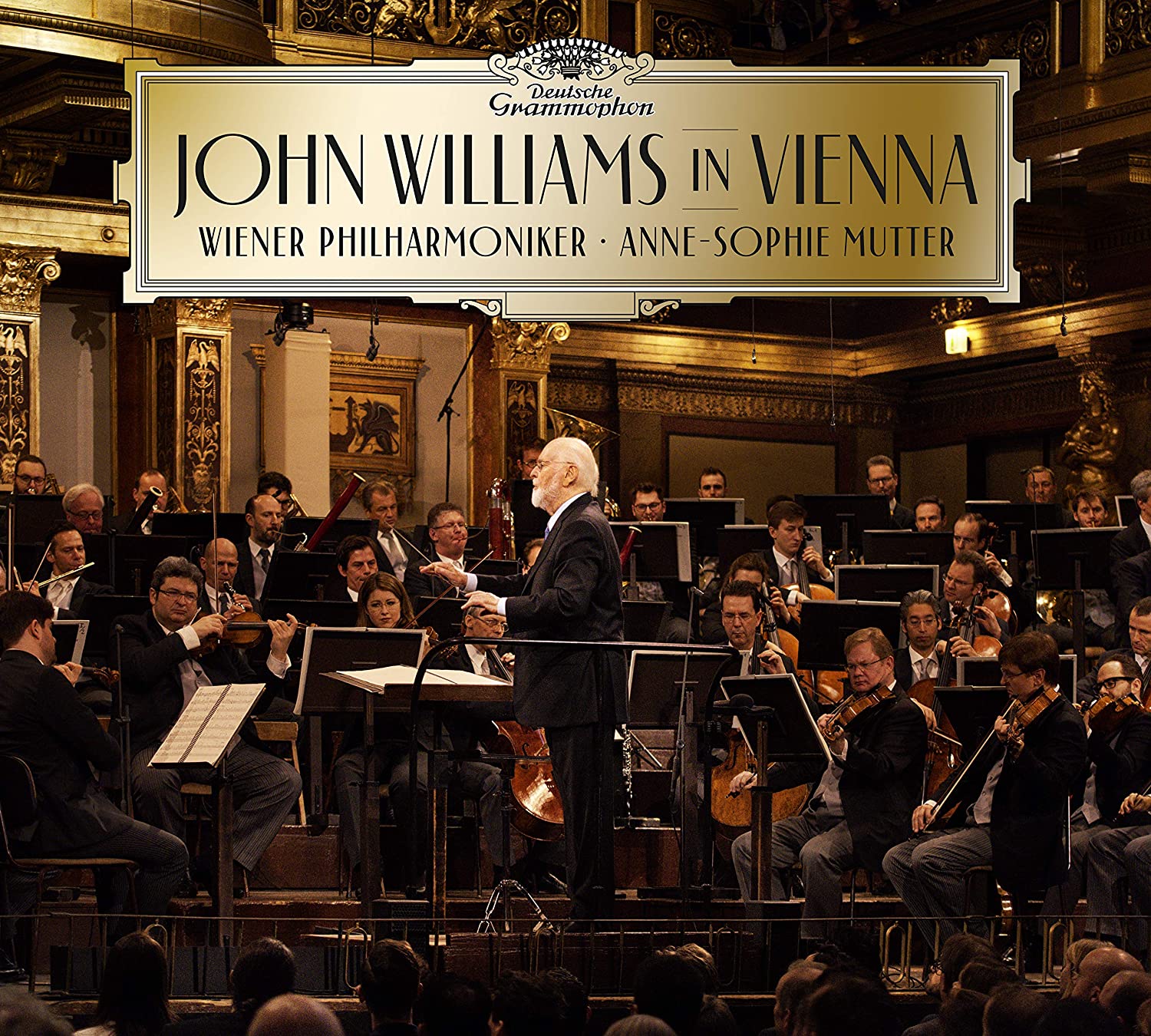 Composer John Williams keeps himself busy. Though his film projects seem to be few and far between these days, the 88-year-old Maestro seems to be working as hard as he ever has. Now in 2020 he is busy writing another violin concerto, this time for Anne-Sophie Mutter, and earlier this year he managed to cross a significant boundary between the film and classical music worlds by at long last making his conducting debut with the Vienna Philharmonic Orchestra and the renowned violinist Anne-Sophie Mutter in two concerts on January 18th and 19th. He conducted a programme of his own film music to packed seats in one of the shrines of the classical music world, the famous Viennese Musikverein concert house, and to commemorate this event, these historic concerts were also recorded and filmed by the Deutsche Grammophon label and have now been released on both CD and Blu-ray.

This review will cover the regular CD release, which contains a selections from the concert, a generous 74-minute programme, which includes a broad collection of classics from Williams’ concert repertoire, old and new. The separate Deluxe release includes both this CD and a Blu-ray which presents the whole concert in its entirety.

The CD commences with a staple Williams concert opener, the energetic and bouncy Flight to Neverland from Hook, which immediately showcases the whole orchestra but especially the powerful brass section which is certainly put to the test during the rest of the concert.

Next comes a slightly shortened version of another Williams classic, the Excerpts from Close Encounters of the Third Kind, that so deftly combines both the more challenging avant-garde orchestral bursts and rumbles with the melodic heavenly 5-notes motif finale into a brilliant summation of the score’s two sides and is here performed truly resoundingly by the Vienna Philharmonic. The orchestra’s response is similarly strong later in Adventures on Earth from E.T. – The Extra-Terrestrial, with its majestically soaring poignant finale, all augmented by the spacious acoustics of the concert hall.

While violinist Anne-Sophie Mutter lent her considerable skills to several pieces during the concerts (the CD release alas features only two), I am happy to say that the one included here, a brand new arrangement of the sprightly dance macabre of Devil’s Dance from The Witches of Eastwick, is one of the highlights of the album. Like all the pieces on the Williams/Mutter collaboration 2019 album Across the Stars, this also is another complete reworking of the theme specifically for solo violin and orchestra. Here Mutter’s violin is cast in the role of a scratchy witch’s fiddle that spurs the orchestra into a devilish frenzied dance with both a terrific extended opening and cadenza for the violin, and I feel that Williams has found a great balance between the more showy solo sections and the orchestral accompaniment. This is a wonderful fresh new take on the old piece not to mention a world premiere recording of this arrangement Williams wrote specifically for Mutter!

Theme from Jurassic Park is another fan favourite and Williams’ instinct has always been to conduct it a bit faster compared to its film counterpart, especially the opening part with the hymn-like theme, which I feel robs it of some of its majesty, and he also does so here, but it has to be said that the opulent, expansive sound that the orchestra creates more than makes up for it. A more recent example of Williams’ superb gift for melody and evoking time and place is Dartmoor, 1912 from War Horse that opens with a beautifully played bucolic flute solo that proceeds into a suite which feels very much part English, part Americana in its evocations of pastoral scenes with special mention going to a gorgeous pronounced brass chorale in the midsection of the suite where once again the brass section of the Vienna Philharmonic is allowed to shine. The piece ends in a heartfelt and very English sounding hymn theme which the string section performs with such poignant warmth before another extended lovely, reflective flute coda.

From Jaws Williams surprisingly chose to perform in these concerts not the famous 2-note main theme, but rather his suite for two secondary musical ideas from the score, namely Out to the Sea and Shark Cage Fugue, which of course is a wonderful piece in its own right. The suite opens with the sea shanty-styled adventure theme which bobs good naturedly and optimistically on the musical waves, before it is suddenly taken over by the darker and classically worked fugue theme for the building of the shark cage that relentlessly spins its key musical idea into continually developed forms, becoming more and more urgent before exploding into a stormy finale complete with thunderous drums and cymbal crashes which I have always found exhilarating extrapolation on the original music from the movie and it is very much so here as well.

The composer’s work for Steven Spielberg’s Indiana Jones films is addressed by Marion’s Theme, Williams’ extended version of the original theme, here beautifully developed and reworked with in turn tender and romantic string playing from the orchestra. Later closing the disc we get the Raiders March, which for some reason feels a bit less energetic and oddly laid back compared to many of the other pieces on the disc, although it has to be mentioned that the midsection with Marion’s theme contains a bit more prominent violin line for Anne-Sophie Mutter.

The album is rounded out by an almost inevitable lengthy selection of music from the Star Wars films. It could be argued that the Main Title is certainly Williams’ most well-known and one of his most often re-recorded compositions, and the Vienna Philharmonic do themselves proud with their simply tremendous walls shaking rendition of the material. Another highlight of the entire disc is a personal favourite, The Rebellion is Reborn from The Last Jedi, where the composer effortlessly combines two entirely different themes and moods into something that feels entirely organic and inevitable, and these qualities are beautifully brought out in the music by the performance. Luke & Leia is equally played with sensitivity and grace, and what would any John Williams concert be without the Imperial March, that by the composer’s own admission is one of the best if not the best performance of the piece he has himself witnessed (performing it was a special request from the Vienna brass section). And it is really not hard to concur that it is a wonderfully rousing and thunderously commanding interpretation of this particular piece.

And while the programme is quite typical for a John Williams concert and there are not quite so many heureka moments for seasoned fans (exception perhaps being the delightful Devil’s Dance arrangement), one of the bigger draws of this type of release is to hear Williams’ works interpreted by such a distinguished institution of the classical music world as the Vienna Philharmonic Orchestra, especially when they are not known for performing film music, and to hear how they respond to the composer’s music under his direction. I am glad to say that the answer is a positive one. The Vienna Philharmonic Orchestra’s performance is as skillful, energetic and beautiful as one can expect from an ensemble of their calibre, with nary a flub or mistake to be heard under Williams’ assured baton. A live performance also always adds its own special energy to the music with a living breathing audience in the same space with the musicians, both reacting to each other, and I feel that some of that energy can be felt in this live recording as well. In addition to the fine playing, the music is also well complemented by the Musikverein concert hall, which lends broad, warm and opulent acoustics to the recording that work especially well for the flashier and grander of Williams’ concert pieces like Hook, E.T. or Star Wars that positively shake the room at louder levels.

But the bottom line is that this is world class music performed by a world class orchestra and musical stars like Williams and Mutter, which is something to be cherished and you can hear the enthusiasm and admiration of these music makers towards John Williams and his music loud and clear on this disc. A celebration of a life in music indeed.

01. Flight to Neverland from Hook
02. Excerpts from Close Encounters of The Third Kind
03. Devil’s Dance from The Witches of Eastwick (*)
04. Adventures on Earth from E.T. The Extra-Terrestrial
05. Theme from Jurassic Park
06. Dartmoor, 1912 from War Horse
07. Out to Sea and the Shark Cage Fugue from Jaws
08. Marion’s Theme from Raiders of The Lost Ark
09. Main Title from Star Wars
10. The Rebellion is Reborn from The Last Jedi
11. Luke & Leia from Return of the Jedi
12. The Imperial March from The Empire Strikes Back
13. The Raiders March from Raiders of The Lost Ark (*) 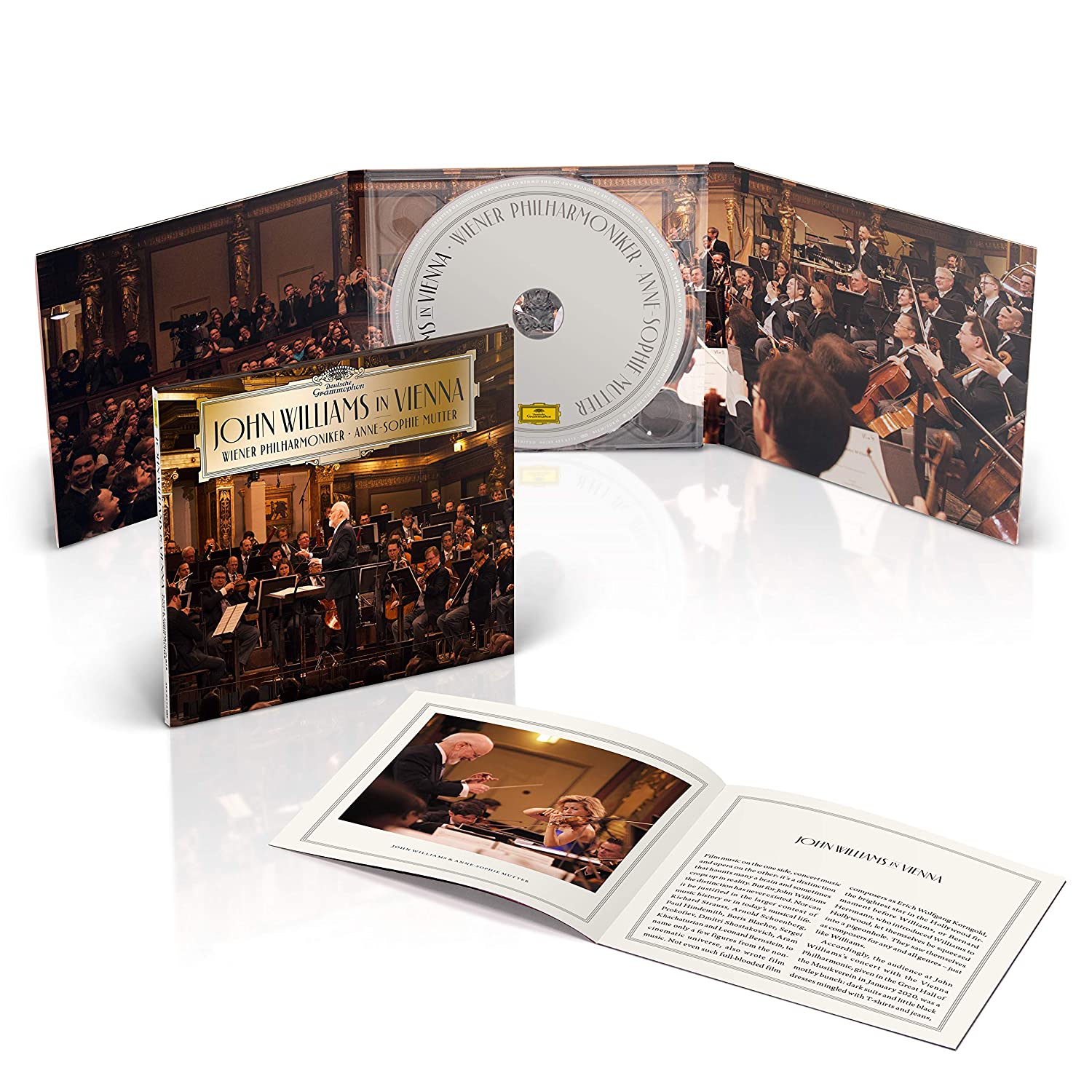