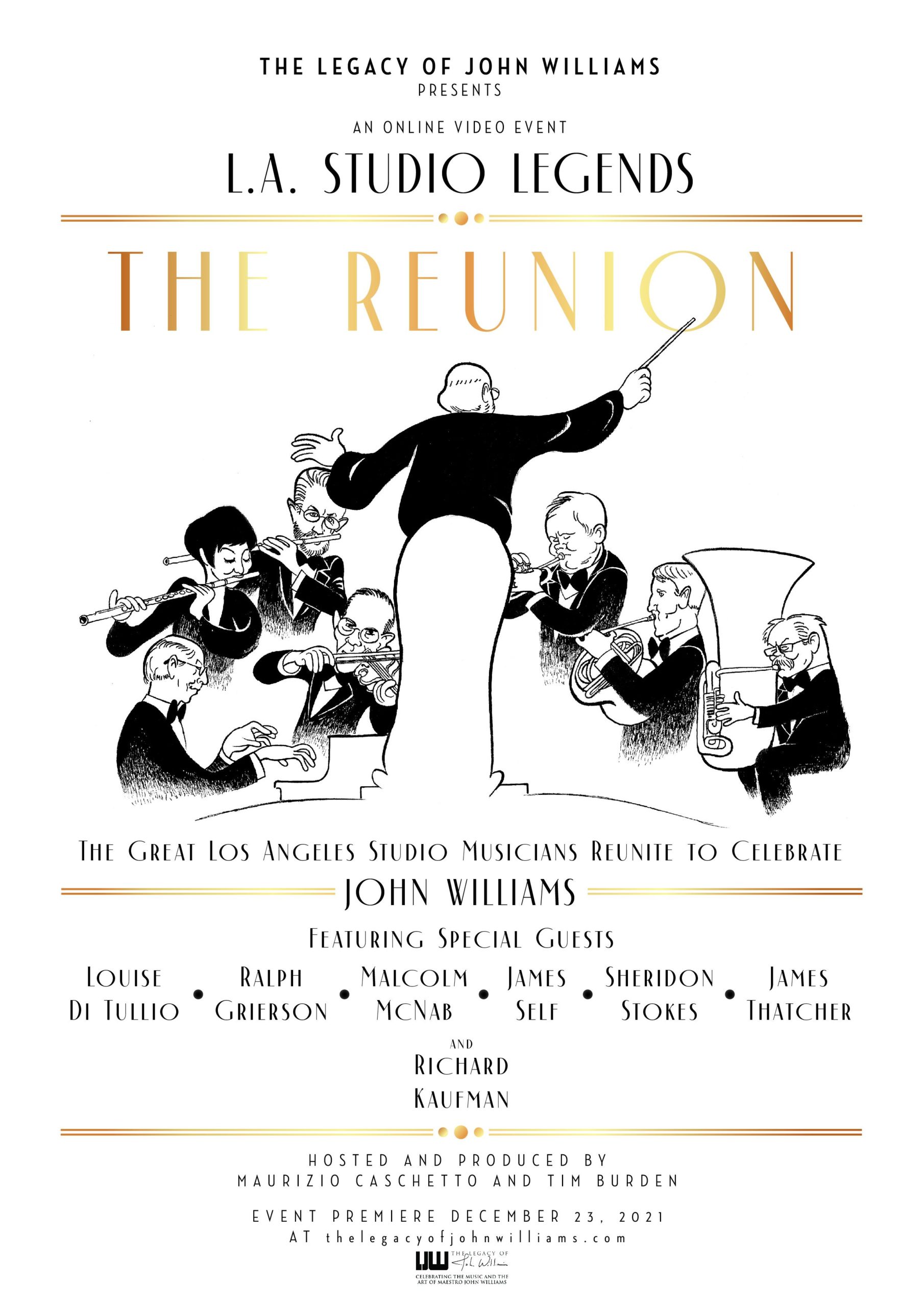 The Legacy of John Williams
presents

“We have fantastic performers in Los Angeles. They’re extremely accomplished, dedicated, there’s a rigorous work discipline behind it. It’s the top of the level of the performing arts world in music. Part of their professionalism is being able to look at something, sight-read it well and, with a little rehearsal and a little direction from the podium, they produce a finished and excellent performance.”
—John Williams

L.A. STUDIO LEGENDS – The Reunion will explore the unparalleled contribution that the great Los Angeles-based studio players brought to many of John Williams’ film soundtracks and recordings in a conversation with some of the world’s most legendary studio musicians who performed in principal roles on dozens of his scores recorded in Hollywood from the late 1960s until recent years: Flutists Louise Di Tullio and Sheridon Stokes, Pianist and Keyboardist Ralph Grierson, Trumpet player Malcolm McNab, French Horn player James Thatcher and Tuba player James Self. Joining the conversation is esteemed Conductor (and former studio Violinist) Richard Kaufman, one of the world’s leading interpreters of film music repertoire and also a personal friend of Maestro Williams.

This spectacular ensemble of talented musicians, reuniting for the first time in years, will offer a precious perspective on John Williams’ musicianship as a composer and conductor, recollecting the unforgettable performances on such classic film scores as Jaws, Close Encounters of the Third Kind, E.T. The Extra-Terrestrial and Jurassic Park among others and sharing many of their fond memories of playing for Maestro Williams.

“It was always a privilege to work for him, even back in the early days,” says flutist Louise Di Tullio, who did her first session with John Williams in 1969 and later performed as principal flute under him for more than 30 years. “John set a tone for working with people in his sessions,” comments conductor Richard Kaufman, who played violin on such scores as Jaws and Close Encounters of the Third Kind. “The feeling in the room was always a positive one and there was always a feeling of mutual respect between John and the musicians, a passion and a desire to make the music really, really great.”

“Over the last two years, we had many great Los Angeles studio musicians as guests on The Legacy of John Williams podcast,” say producers Maurizio Caschetto and Tim Burden, “But this is the first time they are gathering all together to honour John Williams and recollect their experiences playing for him. We’re honoured and privileged to host this event as a tribute to John Williams and to these incredible musicians who graced many of his film scores with their superb playing.”

Prepare for a fantastic and emotional journey with some of the greatest Los Angeles studio legends gathering together to celebrate John Williams.

The Legacy of John Williams is a website devoted to celebrate the art and the music of Maestro John Williams through a series of articles, interviews and essays exploring the cultural and historical significance of John Williams’ music and its lasting impact on generations of musicians and listeners across the world. A successful podcast series bearing the same name features in-depth conversations with esteemed composers, conductors and musicians, including many who worked with John Williams over the years.