On February 28, Sony Classical will release  the compilation album John Williams: A Celebration! An 80th Birthday Tribute (not to be confused with Decca’s compilation to be released on the same month), which includes the premiere release of Variations on Happy Birthday. The album can be pre-ordered on Amazon.com). 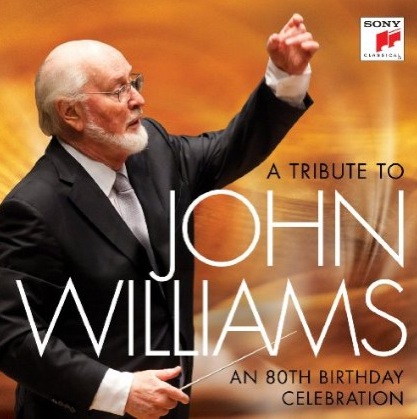 In honor of the 80th Birthday of one of America’s most distinctive and beloved musical voices, Sony Classical is proud to announce the release of John Williams A Celebration! An 80th Birthday Tribute. With instantly recognizable themes from some of the biggest movie blockbusters in recent memory, the album is a celebration of John Williams’ stellar career. The collection is hand-picked by Williams and contains his personal favorites from film and television music, concert works and festive occasion pieces. Of special note is the previously unreleased recording of Williams’ joyous “Happy Birthday Variations.”

In a career spanning almost six decades, John Williams has composed some of the most popular film scores in the history of motion pictures; the Star Wars series, Jaws, the Indiana Jones films, E.T. The Extra-Terrestrial, Schindler’s List, the first three Harry Potter films and many more. Winner of twenty-one Grammy® Awards, four Golden Globe awards and five Academy Awards®, Williams is easily the most successful composer working in film today. Starting with the theme from Jaws through his latest score for the critically acclaimed War Horse, John Williams A Celebration! An 80th Birthday Tribute is a collection of brilliant music from one of America’s most brilliant composers.

“John has transformed and uplifted every movie that we’ve made together.”
Steven Spielberg

“Every fan of Star Wars and of great music is in his debt.” George Lucas