So, here I am. I’ve just returned home from my US trip in Chicago and NYC. And an amazing, thrilling journey it was!

The Chicago concerts were absolutely wonderful, delighting and unforgettable. Johnny was in a very good shape, exuberant. The CSO played all the concerts with such a noble, beautiful feeling. It’s difficult to pick the highlights of these concerts, because I was thrilled at almost everything. Probably the highest peak of emotion for me occured during the unexpected encore of the love theme from The Accidental Tourist. This is one of my all-time JW favourites, so I felt almost like he did a special present just for me. During that performance, I started to cry like a poor fool (and it happened also on the Saturday and Sunday performances).

As I’ve said in the other post, I’ve had the luck to meet Maestro John Williams after Sunday’s afternoon concert and I was even able to take a picture with him. Oh boy, what a thrill! He was so nice, sweet and lovely. What a real gentleman he is! When I said to him I was coming from Italy, he said to me “From Italy? Really? Oh, thank you for coming!” and he smiled at me with the most sincere and truest smile I’ve ever seen. Then I asked to him if I could take a picture with him and he said jokingly “Sure! You need a photo and you have a photographer!” and he pointed out at JWFan Jim Ware, who was kind enough to shot the picture. Johnny was in a very good mood (and that was evident also from his enthusiasm on the podium), like he was still balmed with the glorious and thunderous reaction the audience gave him during the concert. When he posed for the picture he even put his arm around my shoulder (I wasn’t expecting that) and so I did the same with him. I felt like I was hugging with my late grandpa

Then I thanked him for the Accidental Tourist piece and I said: “Maestro, I really loved the piece from The Accidental Tourist, thank you for that” and he replied: “Oh, did you like it?” and I said: “It was lovely! I’m really fond of that score!”. Then I thanked him again and I was able to say this: “Maestro, your music is always with me, right here” and I placed my hand on my heart and then he said “Grazie!” (which is “Thanks” in Italian language). He then mounted on his car along with his people, waving at me, Jim and the other friends of mine.

Irony city: John Williams, the undisputed king of Hollywood film scores, attracts hundreds, if not thousands, of ticket buyers to a Chicago Symphony Orchestra concert who otherwise do not visit Orchestra Hall. But his compositions, even the most crowd-pleasing, cannot match the works the CSO offers week in and week out in originality, diversity and quality.

Williams, going on 76, is clearly a master of efficiency in both performance and rehearsals; he manages to pack two programs of new material with two performances each into a normal concert week, with each work coming out sounding just as he means it to. But one has to wonder if it’s all worth the effort and what CSO management is doing to try to convince the soundtrack crowd to make more trips to South Michigan.

A program largely of pieces that Williams wrote for the concert hall and not the big screen raises its own issues. For while his film scores are derivative of other styles, genres and epochs, there is a genius in their adaptation, redevelopment and total integration into the movies they serve. “Star Wars,” “E.T.,” “Superman” and “Schindler’s List” are entirely melded with their musical scores in both viewing and memory. In such films as “Jaws” and “Close Encounters of the Third Kind,” they actually enter into the action.

But concert pieces have no visual images to support or be carried by, and such pieces as a 1980 “Fanfare” and the 1999 “Tributes!” for conductor Seiji Ozawa are pale shadows of the fanfares or fanfare-based works that precede them. Excerpts from a Washington, D.C., Millennium work called “American Journey” sounded like little more than the accompaniment for a movie trailer.

There was good news in this program, however, in the Chicago premiere of Williams’ 1995 bassoon concerto, “The Five Scared Trees.” There are precious few works for solo wind players, and certainly none as long or as challenging as this nearly half-hour work. CSO principal David McGill is widely considered one of the greatest bassoonists in the world, and he demonstrated why here with unmatched elegance, lyricism, seeming effortlessness and technical command across the full range of this normally supporting-role instrument. If the work — which borrows from Russian Romanticism and neo-Gaelic folkishness — runs out of ideas after its first movement, McGill played as if Mozart had written it.

Excerpts from “The Witches of Eastwick,” “Memoirs of a Geisha” — with exquisite solo playing by principal cello John Sharp — and “E.T.” were not the best of Hollywood Williams. Fortunately, the composer-conductor gleefully pushed into overtime with two “Star Wars” suites as encores. The cheers from the audience raised another irony, for it is Williams who has made the strongest case for using music played by orchestras rather than synthesizers in films. Now if only this captive audience could have also heard some genuine concert music as well . . .

Other reviews of the Chicago concerts: 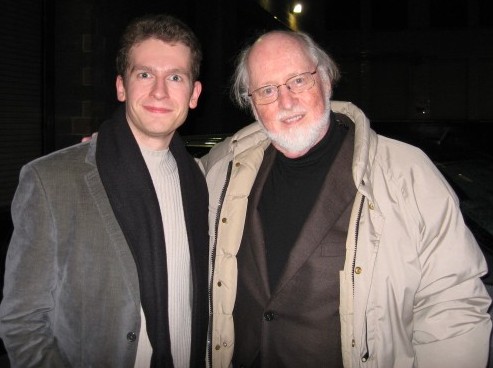