On November 12, 2007 the Rome Philarmonia Orchestra (60 elements), plus two joint choirs (40 singers), performed music from all 6 Star Wars episodes, to celebrate the 30th year since the rise of the Star Wars Saga. Though there wasn’t the original composer/director John Williams, professional director Ezio Monti put all his passion into this project. More magic was added by a dozen well-costumed fans by the Jedi Outcast Fan Club, which paraded thematically on the first notes of each piece. 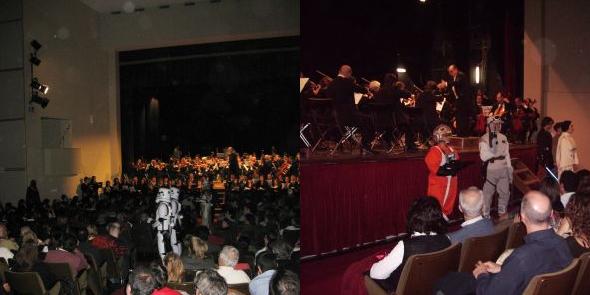 Being a fan and musician since 1977, I waited 30 years for this. Since we were in a theatre just as when we wacth the movies, during the Main Titles it was quite easy to imagine a Star Destroyer flying over the orchestra. The highlight of the evening was, as expected, Duel of the Fates (the Sith theme from Ep. I), because it features heavily the choir: the live performance of this piece made me feel the midichlorians flowing inside. Since there was no additional space on stage, the choir performed just in front of the first row of audience, conveying more power and live feeling. The choir was also featured in Battle of the Heroes (the duel theme from Ep. III), for which two fans reproduced the duel on the theatre’s balcony. All this made a right decision to perform the Prequel’s music in the 2nd part of the concert.
Actually the repertoire choice showed that Episode I, though the less appreciated movie, has the most rich music: Unlike the other movies (which featured substantially one piece each), Monti chose 4 pieces fromThe Phantom Menace: in addition to the essentials Sith theme and Anakin’s theme, he did let us appreciate some underestimated excerpts like The Flag Parade (the opening to the podrace) and The Adventures of Jar Jar (the escape from Naboo to Tatooine), which feature elaborated arrangements which amused the musicians. Pieces from the Classic Trilogy would have been more important, but that would had probably made 1st part too heavy compared to the 2nd one.

If on one hand I’d personally put a little more speed and energy in the choir attack at the beginning of Duel of the Fates, more passion in Anakin’s theme, and a ritardato on the string solo at end of Main Titles, I was surprisingly and genuinely touched by Monti’s interpretation of the romantic themes of Leia, Padme & Anakin and overall Yoda, which really conveyed his exile’s feeling. All the musicians performed quite well, but a particular appreciation goes to the Cello section, top level and so important when performing melody on Yoda’s and Leia’s themes. Really starry was the complex Imperial March, with Darth Vader overseeing that everything was proceeding as planned.
The encores featured repetitions, but this wasn’t criticized – after all it was a single evening and not easy to prepare. The first encore was quite appropriately The Throne Room, with all costumed fans parading in the theatre and Leia presenting at suprise the director with flowers. The second was Duel of the Fates, featturing choir; here we had an hilarious moment, when all costumed fans stepped apart, except Vader which apparently wanted to be part of the choir.. and when the choir’s director prayed him to go, Vader went behind him wanting to direct personally the choir with his lightsaber. This encore got the ovation, and after that half of the audience was leaving, but the director, in a moment of enthusiasm, started a 3rd encore: The Imperial March. Here people began to clap hands, Monti directed them, and the audience stopped on the mid part – so we got a variation of new year’s concert, with the Radetzky March replaced by the Imperial March!