The first half opened with The Cowboys, which was a revelation to me and my family as it is not often heard, and was full of energy in the score and in the performance, as was the march from 1941, which is also only rarely heard. “Harry’s Wonderous World” was by contrast very familiar.  The large choir then accompanied the orchestra in Three Christmas songs from Home Alone, all sung in Welsh, “Somewhere in my Memory”, “Star of Bethlehem”, “Merry Christmas, Merry Christmas”. A beautiful if rather short selection from E.T. took us into the interval.

The entire second half was given over to a suite from 5 Star Wars episodes, starting with the titles fromA New Hope before going back to The Phantom Menace (“Anakin’s Theme”, “Duel of the Fates”), “Across the Stars”, “Battle of the Heroes”, “Leia’s Theme”, “The Imperial March” and “Yoda’s Theme”, then the end scenes and titles from Revenge of the Sith. The programme claimed that all six films were covered by saying that Yoda’s theme was from Return of The Jedi, but this would be stretching the point somewhat for purists. Neverthess, it was totally forgivable as it was generally a rousing performance, albeit with a rather slow interpretation of “Across The Stars” made up for by a very strong rendition of the fighting music, and a glorious end titles sequence to leave the audience aplauding for more. The conductor, Michael Bell had obviously anticipated this, and with his blue lightsabre now safely out of the way, ended the night with what my family considered to be the best piece of the night, “The Raiders March”. During the summer the Royal Philharmonic Orchestra had come from London and played several of John Williams pieces, but all in all, The Cardiff Philharmonic provided the much bigger treat to dedicate a whole concert to the music of John Williams in the Welsh Capital. As “Williams” is the second most common surname in Wales I would like to think that composer’s music is as much at home here as is his name.

Proceeds and donations taken up during the evening went towards providing nursing care and support for those facing cancer and other life threatening illnesses at The George Thomas Hospice, Cardiff.

Photo: The choir singing extracts from Home Alone in the Welsh Language (click to enlarge). 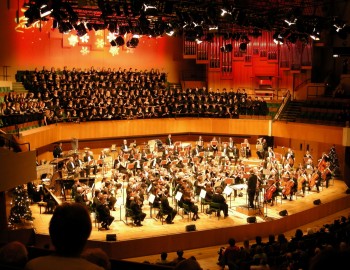