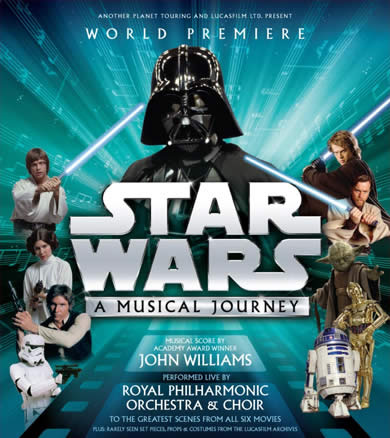 Notes by ‘aj_vader’:
*Arranged so just after Vader’s Theme, it goes back to the intro with ominous strings and piano and dies out.
** Includes a quote of Han Solo and The Princess, then ends like the Concert Arrangement

Just got back from The O2.

It was a good concert. I wasn’t extremely blown away by it, although it was an exhilarating experience (how could it not be). The orchestra were very good (not perfect – trumpets sometimes split the partials on higher notes and the orchestra felt a little loose at some points). The pieces were all taken at tempi pretty near exactly as Williams conducts them on the soundtracks, except TIE Fighter Attack and The Asteroid Field which were a little slower. Also, the beginning minute or so of Princess Leia (the delicate winds before the theme is introduced) was very rushed. I spoke to one of the viola players after – he said that rehearsals were rushed and they had barely a week to rehearse it all. He said the RPO were used to playing the end credit suites but things like Across the stars and the asteroid field were new to them. He said he thoroughly enjoyed himself though as is of course always the case with orchestras playing Williams’ music.

In terms of music selection it was a pretty standard selection of the major cues.

The on-screen visuals were pretty bog standard. There was a main centre screen and two portrait rectangular screens either side which would sometimes show close-ups of the orchestra (mainly horns and solo instruments when they were playing).

The lighting was very impressive though – brilliantly synchronised with the music and made it pretty exciting at some points (end of The Forest Battle was amazing)!

Was quite disappointed with the way the amplification was mixed/presented. The choir (they sang in DoTF and BoTH) were almost inaudible from where I was sitting, which was a real shame. At the interval I mentioned to my friend how disappointed I was that I couldn’t hear them and she was surprised to hear that a choir was even there singing.

Oh yeah, there were some parts cut from certain cues that I was unhappy about. One that really miffed me is a part in the Brother and Sister cue (Luke and Leia or whatever it’s called). The segment where the violins are playing espress soli. and eventually rise to a note which becomes the tonic and the theme comes back beautifully. That violin section soli was massively truncated which is ANNOYING. It’s a beautiful piece of writing and I don’t understand why it was truncated like that.

Anthony Daniels was brilliant – he motivated the audience a lot, and injected a lot of humour into the concert. He’s a great public speaker – a very passionate man.

As for the atmosphere and the crowd – it was quite geeky. Mostly Star Wars geeks and the concert felt like it was definitely pandering to that kind of audience rather than classical musicians or passionate film music fans.

To add to Jack’s comments, I’ve not long been back and I must say I enjoyed it! It was indeed Dirk Brosse conducting (not Gareth Hudson as originally listed) and I thought the RPO was on top form. It was great to hear some of the action pieces such as The Asteroid Field, Here They Come! and The Forest Battle played live. I’m not the biggest expert on the Star Wars music, but I didn’t spot any ‘new’ Williams music (although I stand to be corrected); the majority of the eighteen or so selections were the concert versions with which we are all familiar, played to montages of scenes from the six movies.

What else, now? As some of you had guessed, several of the selections were identical to what was on the Revenge of the Sith bonus DVD, but hey ho. Anthony Daniels made for a good host, combining gravitas and campness in equal measure. The programmes cost £15 (

) but of course I bought one. And I got me my photo of Johnny’s manuscript score for the Droid Battle from The Phantom Menace.

I agree that the choir could have been upped in the mix a little, but it was great to hear the two pieces with them nonetheless.

I had a fantastic time last night, was incredible. The lights were amazing and did not spoil the performance at all, if anything made it all the more better.
As people have said Anthony Daniels was fantastic (wasnt expecting that at all). I thought the choir was very quiet yes, bit dissapointed with that.

Duel Of The Fates and Battle Of The Heores sounded a little weak
Across The Stars was beautiful, as was Yoda’s Theme and Princess Leia’s Theme
Luke and Leia and Light Of The Force were also amazing.
The Highlight of the show for me was ‘The Imperial March’, it was played the best ive ever heard it. My mother came, she hates the Imperial March and she said it was the best peice played!