The show last night was spectacular! This was my 4th year going, and this year I had the best seats yet – in the right balcony, all the way up front. We could see EVERY musician from above, and actually get to watch John Williams in action from the front, instead of just watching his back the whole time. The sound was also magnificent – I know supposedly the sound is best on the floor, but to my ears I could hear every instrument clearly with no distortion and though everyone sounded great!

Here was what was played on Thursday night:

Wonderful introduction, full of energy and set a fun tone for the rest of the night

Suite from Far And Away [County Galaway, June 1892 – The Fighting Donnellys – Joseph and Shannon – Blowin’ Off Steam (The Fight) – Finale]

Enjoyed it quite a bit! Not really familiar with this score, but it was fun.

Then Williams spoke for the first time. He said how wonderful Boston was, then said that the next 3 pieces were an homage to villains and spoke a little bit bit about each one

Them from Jaws (Note: The book said “Devil’s Dance” from Witches Of Eastwick” would be played here, but Jaws replaced it with no explanation)

One of the highlights of the night for me! I had never heard this performed live before, and the SPO totally nailed it. I especially enjoyed watching the string section

Another score I’m not too familiar with, and I surprisingly don’t remember much about this piece.

Imperial March from The Empire Strikes Back

Not much to say about this one!

Then there was the first intermission. After the break, only the string section was on stage, and Williams came out and spoke for the second time. He explained how one of the things he enjoys about working with the Boston Pops for so long is all the talented musicians he gets to work with, and getting to write concertos to showcase their talents. He then brought Keisuke Wakao onto the stage who stood up front next to Williams.

I actually enjoyed the string work as much as I enjoyed the oboe work done by Wakao. Hard to review a piece after one listen, but I will just say I was never bored and enjoyed watching Wakao work.

After much applause, the lights came on as it was supposed to go to the second intermissions. However – instead, Williams grabbed the microphone again and said that since he had the string section on stage it was a great opportunity to get to perform Fiddle Faddle, arranged for strings as it was originally intended (something like that)

Another highlight of the night for me! I had never heard this piece before but it was SO MUCH FUN. The best part was when all of a sudden, the string players were STOMPING ON THE FLOOR for part of the song! Whole thing was fantastic! Must have been a last minute addition since the house lights were on the whole time, like it was unplanned.

Then there was the second intermission. After the intermission, the whole orchestra was on stage again and Williams came out and immediately took to the microphone and talked about 1941 – the year. Said a wonderful movie called Casablanca came out that year, and he talked about the cinematography and how no film he’s ever seen since has looked more beautiful (or something to that effect).

Suite from Casablanca (Note: The booklet said “The Inquirer” from Citizen Kane would be played before this piece, but it wasn’t)

The screen then came down for the first time, and footage from Casablanca was shown while Williams conducted a suite of music from the film. At three points during the footage audio from the movie was heard as well. I am not very familiar with this film or score, but I enjoyed the suite quite a bit.

Nothing different from the usual arrangement, but always enjoyable nonetheless.

Williams then spoke again about Audrey Hepburn. Mentioned how he had only gotten a chance to work with her twice, but that he had spent time with her outside of the business for the last 6 years of her life. Said that somebody from WGBH had put together a montage, and that the pictures don’t add anything that isn’t there, that in real life she was simply radient, and one of the most beguiling woman he had met – something like that, at least.

I think I paid more attention to the video montage of Audrey Hepburn movies than the music, so I don’t remember much about it

Then Williams spoke for the last time. He said that he had been working with George Lucas for 35 years now, and that in January it will be 40 years he has been working with Steve Spielberg. So combined he’s been working for them for 75 years – he started when he was 4. That draw a nice laugh from the audience. He said how in all their years they’ve never had a fight, never disagreed, and just always enjoy creating films together, and that the video should speak for itself.

A Tribute to George Lucas and Steven Spielberg [Jaws – Star Wars – Raiders Of The Lost Ark – E.T. (The Extra-Terrestrial]

This was one continuous piece set to a video montage. First Jaws from the main theme, but not the same arrangement played previously. For some reason people in the crowd started laughing at the beginning, when it showed the Chrissie’s Death scene and the theme was building. What was that all about? This was the shortest segment, and blasted right into the Main Title from Star Wars with the footage of the Star Destroying from the beginning of ANH. The montage was from all six films, and that led into a shortened version of The Raiders March, with footage of the first 3 films (maybe the 4th too – I was focusing on the orchestra and not the montage). That gave way to Flying to E.T., which sounded wonderful as always.

After much applause Williams left the stage, but the orchestra stayed on, so you knew an encore was coming

Luke and Leia from Return of the Jedi

Nice performance, for a theme I haven’t heard in quite a while.

After it ended he closed the sheet music and I noticed there was nothing lined up next. He then left again, with the orchestra on stage. Then he came back and grabbed his baton and with no sheet music out at all, began to conduct:

Nothing that hasn’t been done a million times, but it was fun and full of energy.

Then Williams left the stage again, then came back, then left again! Then he finally came back out and grabbed his baton again. There was still no sheet music on his podium, and the orchestra launched into….

Another highlight of the night for me. This was incredible!!! SO FULL of awesome bombastic energy. The crowd was clapping along from the beginning.which at first I thought would be annoying, but it ended up giving the whole room an awesome buzz of energy and union. By this point red white and blue lights adorned the stage, making stars on the walls. At one point, Williams turned around and kind of made a motions for the audience to quite down, and the clapping stopped for the quieter bridge. Then when it geared up for the big finish, the audience was clapping again. At one point right at the end, Williams turned around and conducted the audience, helping us keep beat with our clapping! It was spectacular. After much more applause, Williams finally gave his patented “sleepy” motion, and this time when he left the stage, the rest of the orchestra followed.

It was a spectacular evening. I will be sad when the day comes that Williams no longer does this every May.

After we lingered a bit to take in the atmosphere of the room (my GF is a big architecture geek and enjoyed the molding and other aspects of the Hall), we headed outside to the stage exit where a largish crowd was gathered to try to get Williams’ autograph. I met up with Trent (Hoyt) from the boards who was there with his friend. Always nice to meet a fellow board member. Unfortunately, there were several disreputable people there who clearly didn’t attend the concert (despite it not being sold out) and where just there in shorts and tshirts holding FIVE LPs they were hoping to get signed. After about half an hour or so, Williams came out. As soon as he did, MORE clowns came out and CUT in front of all of us concert goes with signed pictures and stuff. Trent’s friend succeeded in stopping one of them, but another one made it up front and had a nasty attitude when I told him that we had all been here first, how about being fair.

Williams didn’t stay long to sign stuff, I think mostly because of the disgraceful people with multiple items that kept going “John! John!” and totally crowding him. it sucked. Ugh. Show some respect people! Eventually he got in his car and left.

I really think the BPO needs to either create a place inside for Williams to sign where only ticket-holders can get to, or perhaps create some kind of formal line outside where you must show a ticket stub in order to get in line, and ask people to only get one item signed. SOMETHING needs to change. The experience outside was the only mark against an otherwise fabulous night! 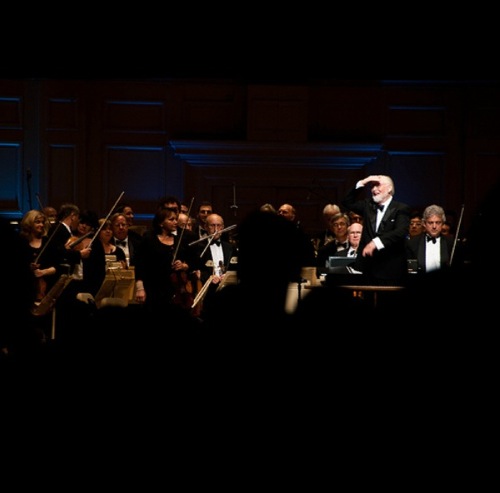