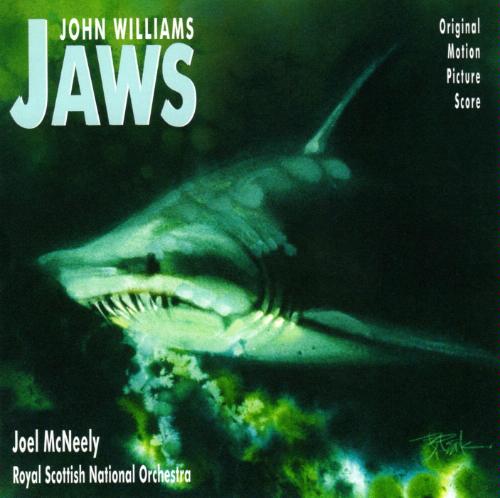 Yesterday I came home with a couple of new CDs, among them Joel McNeely’s recording of John Williams score for Jaws. After one listening I have to say I am very impressed, and much of the criticism this recording has received here has not been fair at all. First of all, now there are three recordings of this score available. How often does one have the opportunity to choose among three different recordings of a given score? It’s wonderful.

Why has Varese bothered to record Jaws at all instead of concentrating on other projects, since there are already two recordings of this score as it is? Obviously, Varese had planned this project and started to record the score before the Decca release of the original soundtrack was announced. It is probably bad luck to release two recordings of the same score virtually at the same time; the market for these things is very slim as it is.

But now that Varese’s recording is there, it is by no means an inferior rival to the “real” thing. It is an exciting account of the score, one that stands on its own and actually compares favorably in some ways to the two other Jaws releases. The merits of this recording are many. There is first of all the performance itself, which is vibrant and focused; under McNeely’s baton the score becomes — rightly so — the Le Sacre du Printemps of the ocean. Take the cue “The Pier Incident” for example: the fierce brutality of the shark rhythm here has a resonance and orchestral lucidity to it that is unmatched by the other two recordings.

Then there is the stunning Glasgow recording itself, a superb job of sound engineering which reveals details of the score almost inaudible before and is full of clarity and power. No other recording of Jaws can compare to this. Not only can you hear every instrument, you can almost locate the precise spot of its performer in the orchestra. The sound is warm, natural and highly dynamic; either predecessor sounds simply flat in comparison.

Something has been said about the artwork. What’s wrong with it? Nothing. Is it the original Jaws movie poster cover? No, and well, why should they have used that again? It’s on the original MCA rerecording, it’s on the Decca release of the soundtrack, it’s on the book, the video, the DVD… guess we all know how it looks like. To set this recording apart they used alternate shark artwork painted by the late great Bob Peak (something Varese had already done with The Cowboys, and I think that was a wonderful idea to honor one of the greatest film poster designers in this way. It also gives this recording a look that is more independent of the movie. It is terrific to have the Decca release of the original soundtrack recording, and I can also understand and respect the wish of fans of the movie to get the Decca release out of the collector’s mentality simply because it contains the original tracks, but the Varese recording stands on its own for purely musical reasons and it would be a shame for it to be dismissed or neglected. I suspect this recording will get more playing time down the road in my CD player than the Decca.