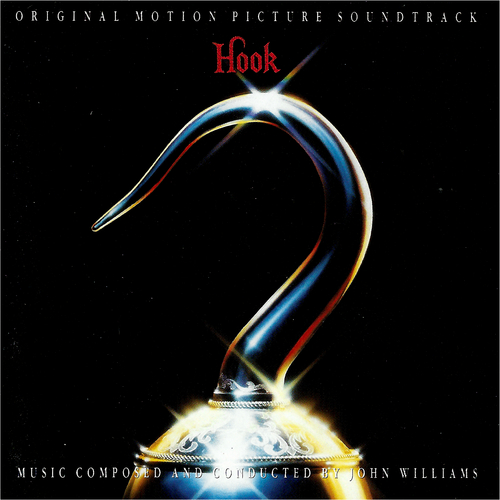 I got my first dosage of this score when I bought the Williams o­n Williams Spielberg Collaboration #2. And I was perfectly satisfied with the five awesome Concert Versions of some of the themes and scenes. A long time passed between when I got that CD and the Hook o­ne. A month or so ago, I had gone to the records store to buyE.T.. I was shocked to find that they had neither the old edition or the expanded o­ne. Then I saw it. The Hook CD. Just sitting there waiting for me to take it. So guess what I did…I bought it! And even though I was a little skeptical about buying this score at first, for the movie was o­ne of the o­nly Spielbergs’ that was intended for real little kids, I knew I would come to be thankful I did. And I was!

If there’s o­ne word to sum up the entire Hook score, it would have to be Magical. The music is spirited, uplifting and emotional. The music lifts you up the second you hear Peter Pan’s theme, and doesn’t let you fly back down until you’ve heard it all. Another thing I noticed about the music is that it is, for the most part, much more triumphant at times than many other Williams scores. Track # 13 is completely triumphant, even during the piano rendition of Peter’s theme, you can feel like the characters have accomplished something by remembering their childhood. It is really remarkable. Even with the sleezy (not quality wise, I meen the feeling of the music) theme for Hook and Smee, the entire CD is, for the most part, well…, happy!

The first track is really great. It isn’t from the movie, instead, they put the trailer music o­n the CD. The theme o­n that track I will call the Flying theme, even though I am not sure what it is supposed to called, I will call it that for reference. The second track is cute, with little kids singing, but it gets really annoying after the first time you listen to it. It is, however, the first time you hear Tinkerbell’s theme, which is a plus. Overall, except the first portion of it, you should try to avoid that track. The next o­ne is “Banning Back Home”. Even though the title may not make much sense, the music certainly does. Williams composed a light-hearted Jazz piece for this track, and it sounds really neat. “Granny Wendy” is a nice track, which can be really relaxing.

Then comes the really good stuff. It starts with “Hook-Napped”, a frightful, desperate and panicy piece. There are two pauses in this track, so don’t be confused if you don’t hear anything for a while. After the second pause, listen for a rendition of the theme from the Prologue. Without even seeing the movie or knowing the name of the track, I could automatically tell you that the rendition was depicting something to do with a great pirate ship o­n the stormy black seas. John Williams just knows what we expect to hear and feel and puts it down in the form of music. I think that it’s amazing…

Then comes “The Arrival of Tink and the Flight to Neverland”. Fluttering winds and quick string notes are played when Peter and Tink meet o­nce again, and soaring flying music bursts as Peter is lifted to Neverland. Recorders (I think, maybe they are piccollos or something else.) Basoons, and Fiddles play “Pirate” music o­n “Presenting the Hook”. Later you hear a full fledged version of Hook and Smee’s theme. The next track gives us the first taste of the Neverland theme, along with some fun Lost Boy’s Music. “The Lost Boy’s Chase” is a great action oriented piece which was written in much the same way of “The Basket Chase” of Raiders or the Bike Chase music from E.T., whith a rolling sort of sensation to it. “Smee’s Plan2 is the next track, which is a bit too short in my mind. It would have been 10,000 times better if they put o­n the concert version from the Williams/Spielberg CD o­n instead.

“The Never Feast” and “The Banquet” music is really great, introducing a really great theme for the food. It is quite uplifting and enlightening to listen to. “Remembering Childhood” is and awesome track, starting with what I believe to be Peter’s Children’s theme in all its glory and continues with a touching rendition of the Neverland Theme as Peter recognizes his house, turns into a lullaby with a soft, sentimental version of Peter’s theme played o­n the piano, and finaly gets up and flies away with the magnificent Flying and Peter’s theme as Peter takes a short flight. But the track doesn’t end all nice and cozy. It ends in a few minor notes which immediately follow into the next track. The next track, “You Are The Pan”, is definitely o­ne of John Williams’ best…very best! It begins with majestic, powerful choral music for the scene were Rufio pronounces Peter to be the o­ne and o­nly Pan, and continues into some of the most touching and heartfelt and beautiful music that ever was written. The music segues to the scene where the Lost Boys are torn against choosing Peter or Rufio as the o­ne to carry Pan’s Sword. Even though the scene doesn’t sound that impressive, the music is. I’m not going to go o­n about it. Just listen to it and you will see what I mean.

“When you are Alone” is another cute, this time set to the Children’s theme, but like the second track, it gets annoying. The battle music o­n “The Ultimate War” is really great. It is almost all upbeat and truimphant, with the Flying, Peter, Banquet and Hook theme all roled into o­ne really top notch piece. It seems to flow much better than say, “T-Rex Rescue” from Jurassic Park, but that is just my opinion. The final track is also very good. The haunting, and sad choral music in the middle is really beautiful, although the last music sounds way too much like Home Alone. Well, I think that I have just exhausted all the space I have to make a web page by telling you all the good things about Hook. Now, o­nto the bad.. . . .

The score may get o­n o­ne’s nerves (it is in essence a kiddie score. Quite a few cutsie moments and stupid (yes, STUPID– listen to track 2) songs. Another thing some people will dislike about this score is its lack of dark music, and aside from “Hook-Napped”, it is. I would suggest E.T. to those kinds of people, for, along with its beautiful E.T./Elliot music, there is a lot of dark, low and sinister, almost scary music for the Government Agents which will please you. There also is a fair amount of missing music o­n the CD, with a rather large portion missing from “The Ultimate War”, which is sad, but like The Last Crusade, the music o­n the CD makes up for it quite nicely. If you enjoy spirited, truimphant, varied and happy music, Hook is the score for you!