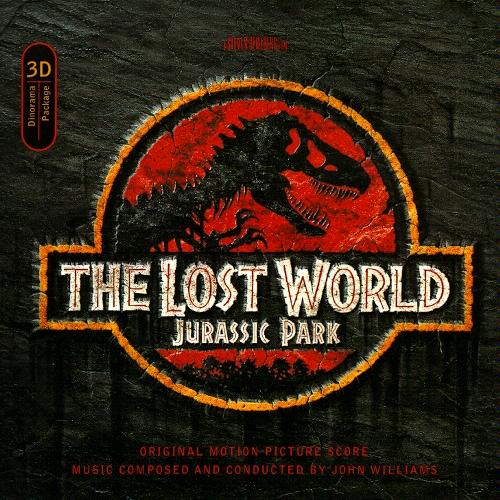 An intriguing theme (is it major or minor) only adds to the suspense of this score. This is an example of some of John Williams at his most thrilling. The wild percussion in “Rescuing Sarah” and “The Raptors Appear”, the dark and creepy moments from “The Island Prologue” and “The Compys Dine”, the exciting edge-of-your-seat music from the end of “The Stegosaurs” and “Visitor in San Diego”, and the majestic themes from “Hammond’s Plan” and the “Finale” all make this CD one that will get numerous listenings. I don’t care what other people say about how this score doesn’t really live up to the potential that the first Jurassic Park had, because I think it does, if not better. This CD is really fun to listen to, especially the menacing action sequences that are reminiscent of old movie scores of Waxman. Like most sequels, The Lost World is much darker than its predecessor. A dark and forboding sense looms over every track, even “The Lost World” Theme. One of my favorites is “The Raptors Appear”. It starts out with the a dissonent rendition of the “Oncoming Danger” motif (C, D, E flat, high C) and then turns into a terrifing and wild death trap. It’s really fun to listen to. The crashing, stomping music of the Stegosaurs comes back to haunt us in the “Visitor in San Deigo”, another great track. I like the mystery and unrest in “The Compys Dine”, and it really gets me unnerved towards the end. “The Trek” is a somewhat ambling atmospheric piece, but sets the mood well. Much like “The Raptors Appear”, “Rescuing Sarah” is another heart-pounding track. “The Hunt” is a sinister, flowing, piece that seems to be a nasty rendition of the Main Theme. The only real complaint I have about the soundtrack is the packaging. Sure a dinorama was a neat idea (for a 2nd grader), and it looks pretty cool once you stand it up (to a 2nd grader), but it can be very tedious and aggravating to have a Parasaurolophus stick his crest out at you every time you want to hear it. I solved the problem by cutting up the dinorama and puttiing it into a regular jewel case. Looks fine if you ask me. But don’t let the awful packaging discourage you from buying the CD. In the end, I would have to give this CD a solid 8.

Did you know that track number four, “The Hunt”, does not appear in the film? For some reason that is beyond my comprehension, it didn’t make it to the final film, even though it would have worked very well with the scene. Speaking about “The Hunt”, has anyone else noticed that it is slightly softer in volume than the other tracks? Also, all but the end of “The Trek” is missing from the movie. But that is okay, because I don’t think that the dialogue would have worked well with the music.