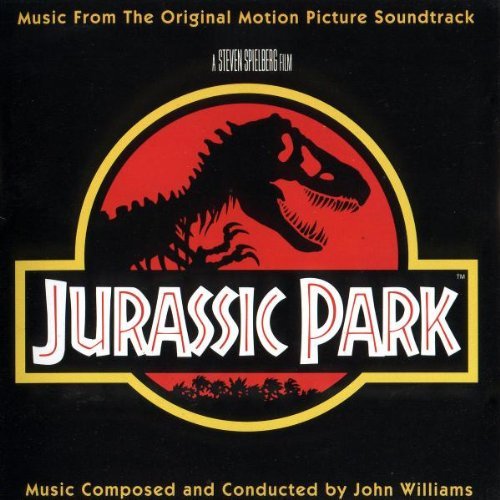 It’s tough making a score for the greatest motion picture blockbuster of all time, and the movie would certainly not be the same without John Williams score. Who can forget the awe we felt when we saw a dinosaur for the first time and heard the majestic theme rolling with the scene, or the terror and confusion as you are playing a deadly game of cat and mouse with two Velociraptors. These scenes were all made more memorable by the music.

Two themes are the center of the score, one is the Jurassic Park theme, the other, the Welcome to Jurassic Park theme. The Jurassic Park theme is definitely one of the most beautiful and easily recognized themes ever. It is heared in all its glory during the Brachiosaurus scene on track 4, “Journey to the Island”. The scene is so mystical and powerful that it is many people’s favorite scene and cue. The pounding, majestic Welcome to Jurassic Park theme is another easily recognizable. This theme, like some others you will hear about on this page is one of its kind, somewhat similar to the Raiders March and Superman Theme, but it still is an experience in its own. It must be heard to be understood. The main problem I have with the score is the fact that about one third of all the music is some kind of variation of those two themes. They work wonderfully with the movie, only enhancing the experience, but it is a little agrivating hearing them over and over (that’s why I liked Indiana Jones and the Last Crusade so much). A little more variety would have been good (maybe a T. Rex theme.) I rather enjoyed some of the quieter light-hearted music from the CD, like the first portion of “My Friend, the Brachiosaurus”, “A Tree for My Bed”, and “Remembering Petticoat Lane”. These pieces are touching and enlightening. “A Tree For My Bed” deserves special attention. This theme is truly beautiful. It is almost like a lullaby. I think that it sounds a little like some of the music from Home Alone. The music from “The Raptor Attack” is somewhat controversial. Personally, I like it because of the feeling of fear and confusion that it gives, but others just hear it as noise. “Incident on Isla Nublar” is a scary ominous track, which introduces a frightful motif used when there is danger that is obviously right around the corner. That motif is heard once again in “High-Wire Stunts”. One weird track is “Dennis Steals the Embryo”. Not what you’d expect to hear, but exactly what you’d expect to feel. Over all, this is a great CD, but it has a little too much of the same thing. I give it 8 and 1/2 stars. Many immortal moments, but a few downfalls.

Did you know that two tracks on this CD are actually connected?! At the end of track 9, “Dennis Steals the Embryo”, we hear a very soft, low pitched sound that ends the track. That exact note continues on, and actually doesn’t finish until about two seconds after “A Tree for My Bed” begins. You may need to turn the bass all the way up to hear it. Another bit of interesting knowledge is about the track “My Friend, the Braciosaur”. First of all, it shoudn’t be called that, because more than half of the track is music with the sick Triceratops. Another thing, a Sony Release called “Williams on Williams – The Classic Spielberg Scores” has a clearer and better rendition of this piece, with four (?) new additions. Instead of the loud begining, this piece starts out slowly with an oboe solo. The first portion (sick triceratops music) ends with a beautiful clarinet solo. A more distinct change is how the flute solo in the Brachiosaur music was sped up dramatically. Personally, I felt that it went far too slow in the movie, and I was happy with this change. The last addition is the very end of the track, which ends with a fluttering flute solo.