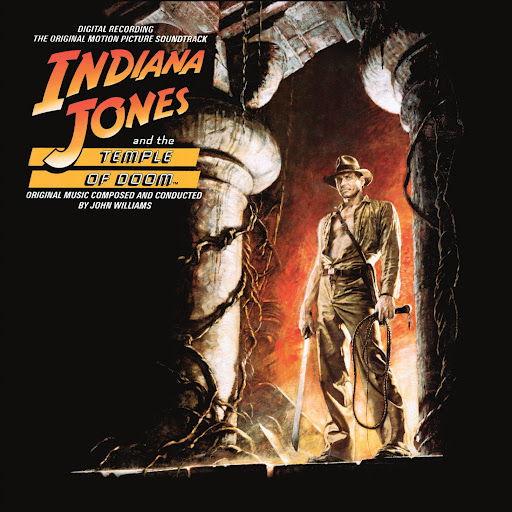 Often said to be the worst in the Indiana Jones trilogy, The Temple of Doom takes Indy and company away from the standard Nazi artifact chase to the sweltering jungles of India and into a subterranean madhouse of horror and death. As the middle movie in the trilogy, the Temple of Doom is also the bleakest, but Indy still manages to get stuck in some pretty humorous situations. Williams’ music follows Indy on his journey through his ordeal, and like always, the good guy wins. In this case, it’s Williams. For the Temple of Doom, John Williams composes a very witty and surprisingly upbeat score. Sure it has its dark moments, but you can’t help yourself from chuckling every once in a while.

The first track on the soundtrack, now almost impossible to obtain in the US, is not written by Williams. “Anything Goes,” a song whose lyrics are mostly in Cantonese, was written by the legendary Cole Porter. It accompanies the opening scene in the restaurant where Indy and Lao Che make their little trade. “Anything Goes” is a nice song, but it can get annoying, like most songs on Williams’ soundtracks (with the exception of “Exsultate Justi” from Empire of The Sun.) Still, it is great to hear the maestro put an enthusiastic spin on this well known work. Very fun! The music following that scene is tense, as Jones tries to get the antidote from Lao. The orchestra goes wild when the crowd literally tramples Indy and his new ally, Willy Scott, who are trying to obtain the diamond and the antidote. As Willy and Indy escape Lao and his henchmen, they fall into the hands of Short Round. Short Round’s theme is introduced during the fun and chase that ensues. I really like Short Round’s theme. It uses oriental styled music, but with a novel touch to make Shorty sound very witty and clever. As the trio boards the plane, Jones’ theme is heard in all its glory. Unfortunately, all is not well, as Jones and company soon find themselves falling off a plane onto the snow capped peaks of the Himalayas on an inflatable raft! The music descends until the raft hits the peak, where the music turns into an exciting and incredibly fast paced roller coaster ride off the cliff of the mountain, and straight down a cliff into a white water stream. And if you think this is a roller coaster ride, wait to you hear the mine car chase. But more on that later. As the raft’s speed decreases, so does the music. Wet sounding drums are heard as Indy finds himself floating down a river in the middle of the Indian jungle. The music tenses as they encounter the Shaman. Jones and his friends are led down a path into a famine stricken village. The music during these scenes is especially atmospheric and painful. A low male chorus creates the real mood when all the villagers are swarming Indy and Willie. Soon after this scene, we first hear the Slave Children’s theme as the Shaman describes the village’s predicament and sends the trio off to Pankot Palace. One scene in particular that I enjoyed the music to was when Indy receives the pictogram from the escaped slave child. It is eerie and ghostly in the way that it uses the percussion. Indy, Shorty and a reluctant Willy board elephants headed to Pankot, with Shorty’s theme in full strength. Willie’s theme makes its appearance during “Short Round’s Theme”. It is much more sensual than Marion’s theme from Raiders. Although it could be better, it is rarely heard, so I guess it doesn’t matter that much. There is a motif I really love when Indy approaches the palace, but unfortunately, like many other cues from the movie, it is mysteriously missing from the CD.

Most of the music during the feast in the Palace is source music. Nothing of particular interest, except for a couple of short cues during the presentation of the dishes. “Nocturnal Activities” soon follows. The first part is sensous and sweeping, but soon becomes playful and frivolous as Indy and Willie begin to argue. But the music becomes frantic when Indy is being choked. It’s hard to not hold onto your breath during this part of the music. It becomes more airy and atmospheric at the end when Indy discovers the entrance to the Temple of Doom. This track is one of the most varied on the CD and is very enjoyable. Next in chronological order is “Bug Tunnel and Death Trap. A pounding and forceful piece, with a suspenseful and hightening speed, along with a few short snippets of quiter music, only to be surprisingly interrupted by the loud music again, is written with much enthusiasm. The cute little march like theme gets faster and faster until you think the orchestra is going to break. But without seeing the movie, you really wouldn’t think the selection was that serious, with two people’s lives in mortal danger. It still retains some of that funness that is present in most of the movie, save the next chronological selection.

Given the same title as the movie, “theTemple of Doom,” accompanies those two gutrenching scenes when Mola Ram performs those sacrifices. The music is the Indian death chant that is sung during the sacrifice. Yep. The CD’s got that! The chant is one of the scariest pieces of music I have ever heard. Scarier than the Jaws theme when you first hear it! You really do not want to listen to this alone in the dark!!! You can even hear the painful scream as the victim is lowered into the lava! After this bone chilling piece, Indy goes after the mystical Sankara stones. With whip at his side, the music for the next scenes are typical dangerous dare devil stunts, with typical daredeviling music to go around it. But as Indy discovers The Children in Chains, the music becomes painful and disheartening. The backbone of The Children in Chains is The March of the Slave Children, which I talked about before. Now, we hear it for the first time in its glory, but the scenes accompaining it force it to be a more depressing version of one of my all time favorite themes. As Indy undergoes his transformation to evil, strange ethnic drums beat out his demise. Shorty, now chained with the rest of the slave children, is forced to work for the cruel guards, and Willie is being prepared to be sacrificed. The following scenes have a mix of the Temple of Doom chant and some more upbeat music when Shorty skillfully escapes from his bondage, with his theme gleaming all the way. The action hightens as Indy is about to kill Shorty, as well as Willie, who is being lowered into the pit, for he is under the control of the Kalima. But clever Shorty saves the day, by burning Indy, which restores him to his natural, benevolent state. Indy proceeds to fight all of the Kali worshipers and triumphantly saves Willie. Unfortunately, Molaram escapes underneath the altar, but the music during the scenes is more upbeat, for the three friends are back together. As they set out to free the slaves and destroy Kali’s following, the best part of the score occurs. In its entirety, The Parade of the Slave Children is a masterpiece. After of course the Raiders March, The Parade is my favorite theme from all of the three Indy movies. It is so energetic and fast that you cannot possibly stop listening once you have started. As the music reaches its apex in triumphantness, we begin to hear more action oriented music as Indy begins to fight the huge and seemingly impenitrable torturer. Shorty has his opposition too- the little Maharaja of Pankot Palace. As the maharaja begins to use his voodoo doll to sway the battle, which was beginning to look better for Indy, around. Shorty, knowing what he must do, takes yet another clever measure to get to the young prince, with his theme booming all the way. The battle between Indy and the Torturer grows stronger, and at times, it closely resembles The “Airplane Fight” from Raiders, where Indy is thrown into a battle that he seemingly can’t win. The music also resembles this scene. The torturer reaches his gruesome end and Shorty stopps the Raja. With all the slave children free, Indy must now escape. Along with more fighting music trying to escape the guards, Indy, Willie and Shorty board a mine car and go on “The Mine Car Chase.” This is probably the fastest paced and most exhilarating selection on the soundtrack. It has several short motifs, that add a pounding sensation to the entire ride. Shorty’s theme comes up when he is being pulled over the lava pit. The piece comes to a slow conclusion, only to be bombarded by the full orchestra as a huge wave of water pushes its way through the mines. The trio make it outside, where Indy is forced to fight a pair of guards. During this scene there is an exact excerpt from “The Basket Gam” which is quite funny. All hell is let loose when Molaram and his guards, as well as Indy and company are hanging off a bridge falling into a river of crocodiles. But some spiritual sounding music sounds as Indy teaches Molaram that he shouldn’t mess with Shiva. With the Sankara stones in hand, he and his buddies triumphantly march into the destitute village, with the Raiders March booming in the backround. The Shaman thanks Indy as the Slave Children’s theme appears, along with all the freed Slave Children. Indy and Willie kiss marking one of the other few times we hear Willie’s theme. The credits now role in, with this musical line up.
Raiders March
Parade of the Slave Children
Shorty’s Theme
Indy and Willie’s love theme
Raiders March

This line up marks the end of the movie and soundtrack. I remember before I obtained the soundtrack simply watching the end credits to hear the music without seeing the rest of the movie. They are definitely my favorite end credits (with The Empire Strikes Back in second.) This score is definitely a worthy follow up to Raiders, and it has types of music that you won’t hear in either of the other Indy movies. Unfortunately, the CD is nearly impossible to obtain in the US, and even if you have the CD, it is very short. Thankfully, I have heard rumors about Lucasfilm buying all the rights to the movie, which may mean they make an expanded release like Raiders. I sure hope they do. Definitely one of the most bone-chilling and thrilling soundtracks I have heard. If you can get it- get it!!! I give it an 8!