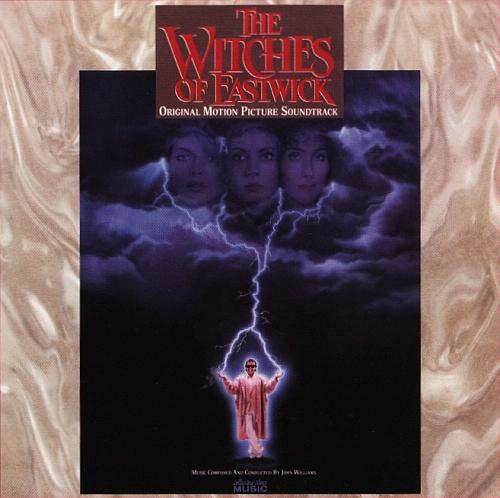 Many years ago when I started gaining an interest in movie music and, in particular, the scores of John Williams, much of my focus was on the big action scores of Star Wars, The Empire Strikes Back, and the Indiana Jones series, as well as a few simpler scores of Williams’. So naturally when I came across The Witches of Eastwick among the list of Williams’ accomplishments, I was almost dumbstruck. I had remembered this score being so light and airy that it could not have come from the composer of many grand orchestral wonders. But Witches is just another testament to the chameleon-like efforts of John Williams.

This Academy Award-nominated score begins very inauspicious, with a very spry string quartet and very light instrumentation to show the innocence and familiarity of Eastwick. Right away we are led to believe this town has no dark secrets, no skeletons in the closet. But instantly the town’s population is raised by one when “Daryl Arrives.” Right away his entrance is grand, with regal horns and percussion, but soon turns playful with the passage of light woodwinds. The two sections take turns introducing us to the idea of Daryl as the three leading ladies, Alex, Jane and Sukie, suggest what type of man he should be: understanding, regal, and playful — “a foreign prince on a dark horse.” Soon this stranger enchants half the town and soon his “Forgotten Name” becomes a mystery, underscored by an introduction of Daryl’s theme: dark synths and spacy strings.

What follows in the film and on CD is basically a long suite where Daryl draws the three women into his circle and, in turn, arouses suspicion from the town crier, Felicia. In “The Seduction of Alex,” the music is very yearning as Daryl tells Alex that her life needs a little lift from the boring sculpting and home life she leads. At first, Daryl is playful (accompanied by his theme, very dark and mysterious) but soon plays on Alex’s emotion, and finally Alex is swept away and along with swelling strings kisses Daryl.

After conquering Alex, the shy Jane is next. By teaching her to play a passionate part in a classical piece, Daryl forces out Jane’s fiery passionate side and literally causes her cello to burn. Williams composes a short piece here which compliments the classical piece, full of fire, passion and strong brass. After seducing two of the girls, Daryl invites all three over for a light afternoon tennis match. Though the girls have just noticed that Daryl is wooing all three, the game is light when it turns to the surreal. “The Tennis Game” underscores the magical part of the scene, where the ball floats on air and moves in slow motion. This is one of the best cues in the film, as it almost seems as if the orchestra gets swept up in the fantasy of the moment. Most of the action is scored second by second. The movement of the ball and the hits on the racquet are accompanied by rising woodwinds and cymbals. Caught up in the magic, the girls join in the fun, until Daryl steps in and blasts the ball into the air, causing a crash of thunder (accompanied by a crash of cymbals) and a violent rainstorm.

Daryl’s plan to seduce Sukie is to appeal to her romantic side. Her scene is scored by a beautiful flute and then romantic strings as Daryl shows his sensitive side. This cue is less urgent, but just as powerful as Alex and Jane’s scenes.

“The Ballroom Scene” is probably one of the most romantic cues Williams has ever written. While the girls float through Daryl’s elaborate hall among a sea of balloons, the swirling strings add more passion to the scene, sounding almost like a waltz.

My most favorite part of the film has to be after Felicia embarrasses herself in the church and reveals Daryl’s exploits in the mansion with Alex, Jane and Sukie. Though we never see it, we know soon that Daryl is on to her and plans to get rid of her or make the town see her as a lunatic. in “Have a Cherry,” Williams composes a theme for a fruit – yes, a fruit! – as he offers the girls a large bowl of cherries. The theme, played on celli, can be interpreted as sinister but when looked at from Daryl’s point of view, is extremely fun and exciting. When Felicia has her major spewing fits in “Have Another Cherry” the orchestra becomes urgent, but is interspersed by Daryl’s dark theme as he turns up the heat (and the force on the orchestra — notice how the orchestration changes through the scene). When Felicia’s husband gets the hint, the orchestra acts as a sound effect as he whacks Felicia with a fire poker.

Once the girls hear of the death, their rage manifests an earthquake under their feet. A rise in brass and then a mysterious string motif accompany their surprise and fear as they begin to see Daryl’s effect on them and the town.

Now the film and its score turns very sinister. In “Daryl’s Call,” the orchestra feels Daryl’s pain and his sudden rage. “Daryl Rejected” uses Daryl’s theme and the witches’ theme as he goes to the girls and tries to win them back. Both themes work well together, a common practice in many of Williams’ scores, going back to the intertwining of The Force theme and Luke’s theme in the Star Wars series.

Once the girls decide on a plan to get rid of Daryl using his own medicine the music turns urgent. “Voodoo Witches” reintroduces us to the main theme as they rush to get prepared for his torture. “Daryl’s Secrets” turn on him when he enters an ice cream store (notice how he whistles part of his own theme in the film! [actually whistled by Williams!]) and the girls stick his voodoo doll with needles. After he spits feathers, he realizes the plan, but not before he is blown across town in a windstorm. We hear the witches’ playful theme amidst the colorful string variations of the windstorm, since it is the witches who are now having fun! The last 20 seconds or so is cut off in the film when Daryl closes the door to the church, turns around and sees the astonished people.

Immediately we hear the cherry theme as Daryl coughs up cherry pits on innocent parishioners. This time, the music accompanies the campiness well (we can tell the vomit isn’t coming out of his mouth), and the joy of seeing Daryl get his due. “The Ride Home” has a lot of urgency, as Daryl rushes home to take care of the girls, and the girls rush to clean up before he arrives. Interspersed with Daryl’s theme this takes on a very sinister tone but never escapes the comedic edge. Finally, the score turns dark with “The Destruction of Daryl.” It is nice to hear this on CD since in the film most of the final seconds isn’t heard among the onscreen sound.

The film ends with a rendition of the witches’ theme, arousing and playful pass through the orchestra. Titled “The Dance of the Witches,” It can be interpreted as a celebration of the witches’ triumph over the “horny little devil.” It ends as it begins, with a light comedic edge and a sense of accomplishment. It really does have a Williams stamp on it, even if it doesn’t sound like his more popular pieces. His use of themes and orchestration is virtually unmatched in many of his other comedic scores (save maybe Home Alone). For those of you lucky to own the CD, you may find it is a CD that enhances the feel of the score, and, in many ways, is superior to the music tracked in the film.