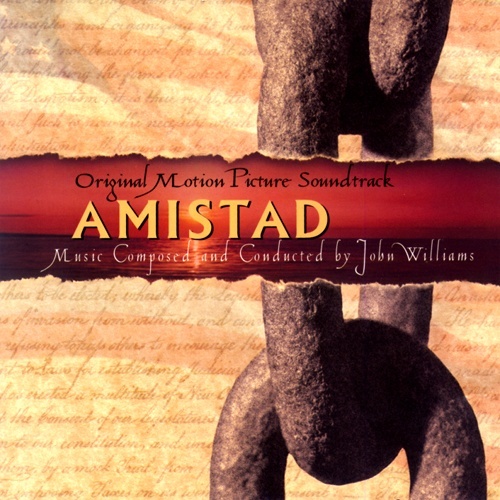 I would love to be a fly on the wall when John Williams and Steven Spielberg get together and discuss scoring options for their films. I have wondered how they came up with the theme for Jaws, as well as the score for E.T. If I could hear this discussion I could better understand why certain cues within scores are used, and what feeling is trying to be portrayed. This holds true for Amistad, which I felt was a good film with a score that was maybe trying too hard to not be noticed.

The idea of the female humming throughout the film is no less than genius, as it shows the quiet nature of these African strangers. It also compements well the percussion-heavy music used in the flashback scenes, which were my favorite parts of the film, mostly because there is more action than dialogue and it acts as a break from all the legalese going on in the present. A few cues really stood out for me in this film. First was what could be interpreted as the theme for Cinque, as it is used only when he is present. It has a little percussion to tie him in with his fellow countrymen, but it also has a little strings and winds to portray his quiet demeanor and his past as a loving family man desperate to return home.

Second was the score when Cinque recalls his capture from Sierra Leone. There are a lot of interesting instruments here, and they give the impression of the Africans as fierce savages through its harsh tones and beats. I’m sure John Williams had fun writing that cue, but once again I wonder what his goal was in writing it.

Finally, I really enjoyed the vocal rendition of “Dry Your Tears, Afrika.” This was when the slavery colony was destroyed and we see hundreds of African slaves running to their freedom. We don’t have to know what the chorus is saying, because the mood and the music says it all. The instrumental version is heard when Cinque cries out “Give us free!” and demands his chains be released. This version isn’t as exciting as its vocal counterpart, but it works well, setting us up for the full-blown rendition at the end of the film. While i really enjoyed Anthony Hopkins’ performance in the film, the score during his speech in the Supreme Court seems too intrusive, especially because we are trying to grasp the point of this long speech (about ten minutes) and yet the score keeps rising and falling and distracting us. It may have worked if the scene had better dialogue and we weren’t caught up in this speech, but as it is we are forced to divert our attention. What may have worked better would have been a shorter cue, starting when Adams rips the Executive Letter. It’s a pivotal part, and we would expect swelling strings and a lead-in to the great finale.

Overall, I believe this score to be the second best Williams score of 1997, far behind Rosewood. I don’t blame this on Williams; I don’t think he had the right material to work from. It sounds like a score he could write blindfolded, and that’s not the kind of score we expect from him.