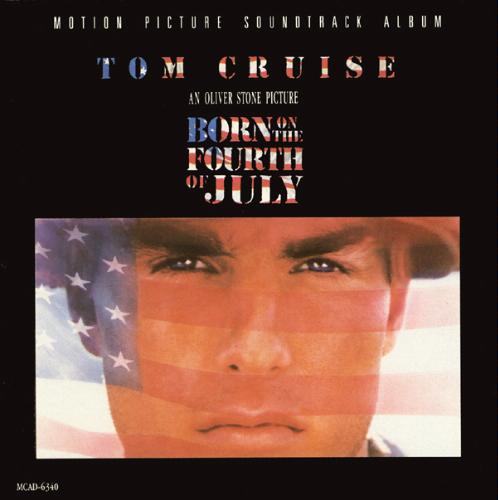 Amidst the flurry and mayhem of Oliver Stone’s Born on the Fourth of July is the extremely subtle work of John Williams. Ever ready to take on a project that presents a musical challenge, Williams succeeded very well with a score that is sparse, but highly effective.

Two themes prevail throughout the film. Most prominent is what should be called “Kovic’s Theme,” as it is always played at a pivotal moment in his life. The use of strings shows how sorrowful and tragic the life of Ron Kovic was, and every time the strings swell, we feel the utmost compassion for this hero. The second theme is a sort of war theme, played on a solo trumpet. Like the single violin in Schindler’s List or the lonely trumpet in JFK, this theme strives to pour out its emotion wihthout banging us on the head.

The only music cue that does not use these two themes is when we are taken to Vietnam (“The Shooting of Wilson” on the song-heavy, score-weak CD). The use of frenetic strings is probably the best scoring Williams has done in the past seven years. Instead of making the score the star of the scene, he uses his strings, puts them in a bag and shakes vigorously. The moment when Kovic shoots Wilson is so shocking onscreen that the bag stops shaking and we are left to wonder what happened, no music to tell us about the horror, until we see the face of Wilson. A strong hit on piano and another shake of the bag depicts Kovic’s confusion and hysteria. These two minutes of scoring would have won Williams the Oscar, but unfortunately he doesn’t do much with the score afterwards.

On the good side, what follows after Vietnam musically isn’t simply a rehashing of “Kovic’s Theme.” If you pay very close attention, you will notice that the key changes several times, most notably when Kovic rehabilitates in Mexico. The strings jump up an octave, signaling a time when Kovic’s spirits are lifted, if only for a brief moment. Then the depression of the war kicks back in and we go back down an octave.

The end credits bring the film to a great close. Outside of a reprise of the trumpet theme, the music is all strings. It starts a little fast, but slows down and fades out. What a genius use of strings, probably second to Herrmann’s Psycho.

It’s a shame that this score doesn’t have much to give us on CD, but it is a small gem in the vast universe of Williams scores.

In his career, John Williams has scored three movies under the director Oliver Stone. These are JFK, Nixon and Born on the Fourth of July. Williams had experience scoring historical movies before, with Steven Spielberg’s Empire of the Sun, but never before had he done such a profane and important film before. Born on the Fourth of July began Williams’ descent into some of the more historically important films to date. These including Schindler’s List and most recentlySaving Private Ryan. The music from Born on the Fourth awesomely reflects the somber yet human nature of the movie and can be immensely moving. Despite the serious content of the film, even Williams gets to have some musical fun, and we’ll talk about that later. Lets start off with the soundtrack.

I should begin by saying this is by far the smallest album in terms of Williams’ music I have. Only about 24 minutes of orchestral music exist on the CD. The first 8 tracks are all songs heard in the movie from the 60’s and 70’s. Some of them are good, some stink and others just take up space. The best song, also the longest, is “American Pie”. All 8 minutes and 32 seconds of it. But this is the John Williams score review so lets continue with the score. The movie and soundtrack part of the soundtrack begins with the dismal Prologue, a simple yet powerful trumpet solo wonderfully preformed by Boston Pops’ own, Tim Morrison. The Prologue theme, or rather, statement, because it really sounds like a message, comes up in the movie to remind us of the tragedy of the Vietnam War. It is a simple elegy to the damage done by the war. Next up is “The Early Days, Massapequa”. It starts out with the main theme, the theme that follows Ron Kovic through hell and back. I tend to think of it having two parts. The first being the slow and melancholy beginning 56 seconds, the second and more powerful part being the following. The chords grace from major to minor in such a moving way that after seeing the movie, I was brought to tears not by the film, but by the music. Not to say that the film was not effective. Born on the Fourth was a beautiful movie. Most of the movie’s score was reserved for the string section, so almost all of the first track is strings, except for an oboe solo after the main theme. During the scenes of Kovic’s childhood, Williams’ paints a wonderful picture of innocence and family, which later grows into another theme. This theme is more happy and upbeat than the others, and on track 14 it even creates a triumphant atmosphere. But soon the happyness of The Early Days melts back down to the main theme. The track dies down on a major note, depicting hope in the somber film. But the next two tracks are almost devoid of all hope of happiness.

Track 11, “The Shooting of Wilson”, is absolutely terrifying. The track accompanies the wartime scene when Kovic’s company accidentally massacres a house full of innocent Vietnamese. As the troops walk in, the strings slide up and down uncomfortably and almost drunkenly to depict a sense of confusion. A lone baby sits in his dead mother’s lap, crying in the movie. In this piece, you can hear that baby crying. You can see the corpses and smell the stench of blood. After the massacre, the troops emerge under fire. Now, forget what you’ve heard from Saving Private Ryan about music not being effective during a combat scene. I see how SPR would have been cinematically damaged by the addition of music to the horrific invasion scenes, but Williams’ music for the battles in BOTF is remarkably effective. The music has no destination, no sense of direction. The confusion of battle is captured in this piece. But the climax of the piece occurs after a pause from the strings. Suddenly, unexpectedly, a sharp dissonant jab on a piano. Kovic realizes that he has shot one of his own men. After the shock, Williams gives us the Prologue Elegy, and beautifully adds the family theme, showing us that Kovic is still human.

“Cua Viet River, Vietnam, 1968”, track 12, begins with a magnificent rendition of both the main theme and the family theme. The first 1 minutes and 34 seconds act as a great summary of the movie, incorporating all the emotions from the film. After 1:34, however, the music takes a turn for the non-thematic. Pounds on piano keys, swarming strings and even the prologue is thrown in the jumble. Soon, synthesized voices are inserted. This is another very scary piece. Don’t listen to it in the dark. John Williams even goes so far as to put in synthetic drops and whispers in the music, giving it an incredibly paranoid feel. The main theme is tragically played with the whispers in the background, instilling a sense of hopelessness. On the next track though, “Homecoming”, the music takes a turn for the jovial again. After a suspicious start off with pizzacato low strings, the main theme, this time slightly more upbeat, is played. After that though, comes the fun I spoke of in the first paragraph. Accompanied by a pop beat, Tim Morrison plays a heartfelt and gleeful theme. Unfortunately, that theme ends all too quickly, giving way to yet another rendition of the Prologue Elegy. Everything isn’t all right. Yes, everything isn’t all right. After “Homecoming”, the Soundtrack skips right to the End Credits, even though there was at least an hour of film remaining on the movie. Oh well. The next track still is the best.

I always love John Williams end credits music. From the powerful “Hymn to the Fallen” from Saving Private Ryan to his sweeping epilogue from E.T., the end credits always are a highlight of a soundtrack. This goes without saying for the end credits of BOTF, which is one of my favorite Williams compositions. I would go so far as to call it a suite, if only a BOTF suite didn’t already exist on another CD which amazingly and sadly I havent heard! But back to the music. The track begins with a soaring and fantastically uplifting playing of the family theme. Much of it heard nowhere else in the film, the first minutes of the end credits are the most triumphant and touching musical moments in the movie. They represent how far Ron Kovic has come on his path to redemption. The sweeping crescendo at 2:00 leads into some calmer music, which acts as a segue into a totally orchestral rendition of the Homecoming theme. Once again, Tim Morrison plays the music emotionally, and this time a little bit slower. Soon though, even the end credits can’t avoid the main theme. It explodes with cutting and terrifically moving strings, which play it with such force that you think the movie isn’t even over yet. Well, the end credits aren’t over yet. After ending the main theme in D major, it suddenly shifts into D minor as the Prologue theme is played for its last three times, giving the movie a sense of uneasy closure.

Like I said before, this movie’s score brang me to tears. It is without fault. Devoid of any awkward musical moments. Everything, even “The Shooting of Wilson”, seems to fit perfectly in the mesh of the film. John Williams did an outstanding job. My only quip is about the shortness of the CD. But what can you do. And a concert arrangement of “Homecoming” would have been nice, but you work with what you’ve got. Regardless of CD length, Born on the Fourth of July remains an incredible work. Although it is definately not my favorite soundtrack, and other soundtracks which have received lower ratings rank higher on my personal favorites list, this work is still a masterpiece. 10.