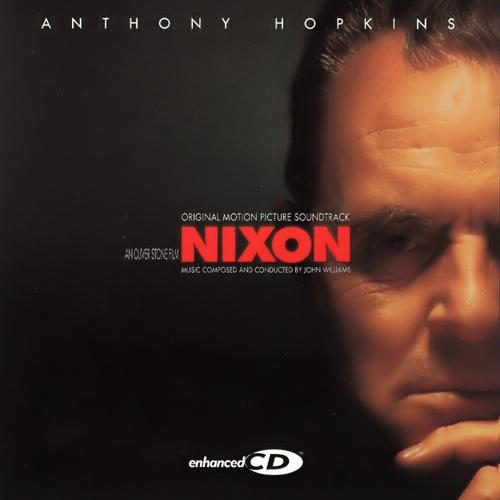 Ah, Richard Millhouse Nixon, we hardly knew ye. That is, until we listen to the movie soundtrack bearing your name. If anything, the score to is an elaborate character portrait, in fact, the biggest and most comprehensive John Williams has ever written. Richard Nixon was a tragic and ominous personality, and Nixon the score is just as tumultuous and epic as his life. There are boundless musical elements working with and against each other in the score, which gives an incredible sense of tension and glory. Simply put, the score to Nixon is the essence of life- confused and often bumpy, but filled with humanity.

For Nixon, Oliver Stone and John Williams’ 3rd collaboration, the score called for an accurate depiction of the late president’s rise and fall from grace, told with the dignity of not making Tricky Dicky look like he’s being depicted as some heartless mobster or monster. In this sense, Williams’ score is perfect. It fits the film like a glove. And not only is it right on the mark in showing Nixon and his life, it gives a great deal of depth to the tortured anti-hero, humanizing him, as I imagine Oliver Stone set out to do in the movie. But as a stand alone work, the score to Nixon suffers to an extent. Just like the movie, it is by no means pleasurable (save a few key moments) or relaxing to listen to. There’s just too much going on musically to make it easy listening. But once you get beyond the first few very hard listenings, you start to see how interesting the music is.

The score starts off with a bang, that’s for sure. Within seconds, the gigantic overture, “The 1960’s: The Turbulent Years”, the first theme is introduced. It is a larger than life boiling pot for the orchestra. The chord progressions are very unnatural and unexpected, almost ugly to listen to. Soon the piano comes in, an element that is used throughout the score. After the short solo, the next semi-theme is introduced. It, again, is a set of melancholy chord progressions that appear almost everywhere in the score. Directly after that comes the biggest surprise of the score, the third, final and best theme, presented on the first track, the only place where it is developed at all. One may recall this vicious motif from the trailer for Nixon and “A Civil Action”. It is simply brilliant, involving and exciting. A top notch solo performance by renowned trumpet player Tim Morrison recalls the sinister motif over and over, changing keys and octaves, overpowering the listener into complete amazement. This short segment is Williams at his very best, gathering all the orchestral techniques he has learned over his long career into a magnificent centerpiece. But it is over all to soon. The first theme is restated, this time more melodically, and thus ends the overture.

Following the 60s comes the “Main Title”, a mostly ambient piece, dark and gothic, recalling the second semi-motif and reaching a grim climax as the camera pans over the White House gate in a spooky moment. Slowly dying away and making way for the second of the four spotlight tracks on the CD (the first being the overture). “Growing Up In Whittier” introduces a lovely, flowing and nostalgic trumpet theme for Nixon’s sad childhood and marriage, emotionally played by Tim Morrison. It lacks the lushness of Williams’ Massapequa theme from Born on The Fourth of July, but makes up for it in its straightforward simplicity. The music then segues into a less melodic string passage, with a welcome clarinet solo, and at the end, introducing a short motif that will be used again. Track 4, “Watergate”, is a sneaky and menacing track, that combines orchestral and synthetic chaos, giving a nightmarish impression. One of the most disturbing tracks featured on the CD. Track 5, “Dallas, November 1963”, is another frightening piece, building up tension with a repeated rhythmic pattern as Kennedy’s death comes nearer and nearer. Track 6, “Losing a Brother” is yet another ominous track, and shows a growing tendency of Williams’ score, the use of just plain chords, often enharmonic, instead of well developed themes, which is a pity. The mood lightens up as the semi-chord-progression-theme turns up, as well as another solo by Morrison. And breaks out in an unexpected bang as Nixon’s brother dies.

A welcome change of pace comes as “The Battle Hymn Of The Republic” is played enthusiastically. Strangely enough, the well known march does not disrupt the pace of the score at all. A bleak and low variation of the great 3rd Overture theme begins “Making a Comeback”, which grows into a more hopeful and serene development of the chord-progression theme and later that nice motif that ended “Growing Up In Whittier”. Track 9, inappropriately entitled “Track 2 and the Bay of Pigs” is another dark track, with a self contained short motif, featuring a very CIA/FBIish sounding brass chorus. A weird synth passage occurs at 3:23, followed by piano taps, and another variation of the best overture theme. One of the most atonal tracks, followed by one of the biggest. “The Miami Convention, 1968” is one of the biggest things I have ever heard. A massive brass choir begins the track, with the strings building up a great foreboding feeling (the string passage he wrote for this scene will be later used in Seven Years in Tibet— Listen closely!) After the strings, the brass enter again, in epic monument, and the strings play the passage again, with trumpet bursts and even more brass! Suddenly the 3rd overture theme enters, leading into a massive repeated explosion that can only be compared to the mammoth crashing of the ocean against the rocks. Soon, with Nixon’s success apparent, the orchestra begins a more victorious march-like, closing the track. This work never fails to get me sweating. It is equal to a turning point in one’s life.

The next track is the antithesis of the last, and it and its predecessor are among the 4 best track on the CD. “The Meeting With Mao”, starts off softly, with a harp solo, and then introduces a graceful yet unsettling theme. To me, this moody track represents the spoiling of innocence and corruption that Nixon and Kissinger somehow subconsciously partake throughout the entire film. Track 12, “I Am That Sacrifice,” is a totally themeless piece, dissonant and defeated. The piano is the center of the track, with eerie resonance reminiscent of Presumed Innocent. This track is entirely for atmospheric purposes in the movie, and therefore, can be very droning and boring. Still, it is interesting and mournful, giving great insight into the turmoil Nixon felt as he faced impeachment and resignation. To conclude the soundtrack, the final track, “The Farewell Scene”, provides a needed sense of closure. It begins with a much needed development of the 2nd theme from the Overture, adding orchestral color to Nixon’s resignation speech. In a strange twist, Williams uses the huge introductory theme, triumphantly and honorably as Nixon steps down. This time, the chords don’t seem ugly at all. They even could be seen as beautiful. The parallels between the score and Nixon himself are truly uncanny. The final notes are major and glorious, and tie the score in a tightly wound full circle. Even so, the score may leave a sour taste in your mouth, which seems appropriate. Ends are unresolved and matters are still unclear (and for me, a wonderful chorus that was used over the end credits is mysteriously absent from the soundtrack).

Nixon was a flawed individual, and John Williams’ score demonstrates the man and his Shakespearean downfall vividly. But for anyone other than the most die hard John Williams fan or connoisseur of film music, the listening experience is by absolutely no means an easy one. It’s hard listening, and requires a full appreciation of its subject. There are, however, some great moments. Unfortunately, the three themes, in my opinion, could have been developed further, especially the first, which is only heard twice, and the third, which is a neglected stroke of genius. For the first time, I am going to split the rating for the score (I feel I should have done this before, but what can you do?). I will give it a 7 for a CD listening experience, outside the movie. Yes, there are people such as myself who enjoy and appreciate the wonderful moments buried in the score, but the casual, and even serious collector or fan will be somewhat bewildered by the often fragmented and disturbing music. 7 out of 10 for CD listening experience.

On the other hand, the score for Nixon is a perfect example of an effective score within a movie. It illuminates the characters, sheds light on their emotions and adds atmosphere and mood where it otherwise would not be present. Nixon also uses interesting musical techniques and truly must have been a gigantic effort by John Williams. He did a great job in the long run. For score as heard in the movie, I give Nixon a well deserved 10.

Please note that nowhere in this review did I take into account the fact that the Nixon CD is an enhanced one (the first ever, coincidentally.) That would have drawn away from the emphasis and thrust of the review, in my opinion.

A lot of people continue to critique Oliver Stone’s film choices, but Nixon was definitely one that could have been done by Oliver Stone (as opposed to Salvador or U-Turn). Also, this is a score that could have only been handled by John Williams. Given such a broad range to write music for, Williams gives us a chance to see Nixon in just about every human emotion possible.

Especially notable on the CD soundtrack (but not played in the film) is Track One: “The 1960’s: The Turbulent Years.” I like how it starts out strong yet passive, then gives us a strong middle (with a three-note sequence reminiscent of the Imperial March) and a somber ending. Of course I liked every strong cue (i.e. tracks 5,8 and 10), but it is his quieter parts of the score that seem to stand out the most as it acts as an aid to understand Nixon’s inner mood throughout his childhood, his rise in power, his presidency and downfall.

This score does not have as lasting an effect as the previous Stone-Williams collaboration — JFK. Of course Nixon does not serve up conspiracy, but rather tries to show the American public a side that the history books do not mention. A touching and emotional score.