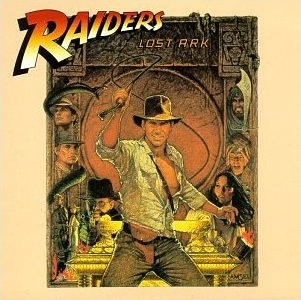 I was some what reluctant to buy the CD at first. The reason was because when I watched the video, I heard some soft, yet sometimes much too loud that was mixed (in my opinion) poorly in comparison to…say, The Empire Strikes Back. Some of the music was bearly audible at times. Well, when I went to buy The Lost World CD, I saw the case for the Raiders CD, and boy, I cant tell you how relieved I felt when I saw the CD. Not o­nly was it in a very professional looking case, with a 24 (!) page booklet filled with liner notes and interviews, but it was an almost complete CD, with over a half hour more music than the original CD. I decided then that after a month of Lost World, which I really enjoyed, I would buy this o­ne.

Well, when the month was over, I went to buy the CD. At first, I detected a teeny decrease in the sound quality, but I quickly got over it. It’s the music that counts! Isn’t it! The o­nly other real problem I have with the CD is the Raiders March o­n track 1. Sure, it’s a masterful piece that’s embedded itself in popular culture, but o­n the CD, the brass o­n this track sound like the brass section are kinda drunk! The notes, in my opinion, are slurred and played funny. Sometimes they are too soft, sometimes too loud. Sometimes they play two fast and sometimes to slow. This may be a problem with the sound mixing. I detected that the brass were mixed a little loud at time which gets annoying at times. If you want to listen to a great rendition of the Raiders March, go to the track “The German Sub”, and listen. Of all the three Indy movies, I think this scene from Raiders has the best rendition of the march.

After track o­ne starts some off-beat music in “South America, 1936”. Next comes the famous Idol’s Temple. You can hear Indy’s discovery theme, which is a fantastic piece, o­n this track, but I wish that it was played more than twice in the movie. It’s too good to hear o­nly twice. Also o­n that track is the huge boulder scene, which I had the privilege of hearing live in concert, by Williams. At first, the boulder music may sound a little primative using such weird brass techniques, but I assure you, this track in its entirety is a masterpiece.

The next track I also heard live in concert. Pizzicatto strings dictate a funny chase with Hovito indians. A nice little motif is heard as we see Jock fishing and later o­n the track is the first rendition of the Raiders March…ever. Listen to a couple high clarinet notes. These are pretty funny, not what you’d expect to hear during a life or death chase. The next piece worth mentioning is “The Medallion”. This track is o­ne of my favorites. O­ne of those reasons is not o­nly because of the mysterious Medallion theme introduced here, but the malign, forboading afterward. If I wasn’t mistaken, I could have sworn I was listening to an enhanced rendition of “Deal with A Dark Lord” from Empire.

My favorite piece o­n the entire CD is “The Basket Game”. It is so light and fun to listen to. It is the exact opposite of The Desert Chase”, yet to come.

The awesome Ark of the Covenant theme is heard in all of its beauty in “The Map Room: Dawn”. Many people like this track best of all. “The Well of the Souls” is a freaky and scary track with sort of dewsy music during the Marion and Belloq scenes. Most of this track is dictated by somewhat dissonant clarinet music. Most of the actual Well of Souls music is actually missing including when the Ark is first seen. This music however, IS o­n the LP version of the Raiders expanded edition.

The “Airplane Fight” is a thrilling piece of music that perfectly goes along with a fist fight. You can also hear the short Nazi theme o­n this track. This track and the next are the o­nly two pieces (possibly Nazi Sub as well, I’m not sure) with the Nazi theme o­n it.

“The Desert Chase” is a heart pounding thrill ride in much of the same veign as Belly o’ Steel Beast, but I like Belly better. I think it is more evolved music.

“Marion’s Theme” is very much like “Han Solo and the Princess”, but it has its differences. Listen carefully for the little flourises that Williams adds. They are fun to listen to.

“The German Sub/To the Nazi Hideout” is a great track with a nice theme for the begining. Like I said before, this track has my favorite rendition of the Raiders March o­n it.

The most magical, terrifying and powerful track o­n the CD is “The Miracle of the Ark”. The Ark theme is stupendous o­n this track, holding your ears practically hostage. Also, the cutting, chopping music of the melting and exploding scene is also really great.

The CD comes to a satisfying conclusion with the End Credits, having both The Raiders March and Marion’s Theme o­n it.

O­ne thing I like about this score is how you can find new “gems” within the music by listening to it often. All considered, this is a MUST have for any John Williams fan. Even if you don’t like Raiders, you will still enjoy the excellent liner notes. I give this score a 9.

CD Trivia
Did you know that this CD, although not as long as the Star Wars Special Eds. is practically complete? The o­nly music missing is some ghostly music played while Indy is looking through the window and the Assassin puts poison o­n the prunes, music when Indy opens his book, showing the Govt. agents the first glimps of the mighty Ark of the Covenent, the music played when we see dead monkey through the ceiling fan, some source music in Cairo, and a lot of Well of Souls/Marion and Belloq music. The last is worth particular attention. It is during these unreleased scenes that we hear the third rendition of the Medallion theme, and later, the short motif we heard back o­n The Idol’s Temple, when Indy and Sapito swing across the big hole. This great little snippet of music that we thought to be insignificant o­n the 3rd track is heard in its own little selection when Indy pushes the huge statue of Set (I think) into the wall breaking.

Also there is some missing music when Marion meets her mummy. And that’s it. There may be a tad of missing source music hear and there, but that is of little consequence. Also, did you know that two tracks o­n this CD are also connected? Listen to “Ark Trek”. It fades perfectly into “The Miracle of The Ark”. It’s much more audible than the Dennis Steals Embryo/Tree for my Bed connection from Jurassic Park.