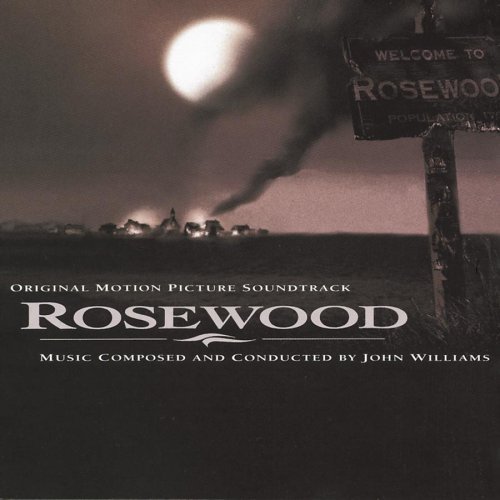 Imagine my surprise to see John Williiams’ name in the opening credits for the film Rosewood. Not to say that I don’t think Mr. Williams can score a film covering such a topic as race relations (Schindler’s List comes to mind), but it wasn’t billed as the type of high-profile film he would do. But I am utterly glad he chose to work on this project, as I am sure is director John Singleton, who wrote in the liner notes his joy in having Williams score one of his films.

Sometimes film composers take on films to have the chance to work on different aspects of music. Williams did it with Home Alone (Christmas music) and now he’s been given the chance to write a little gospel music for this film. I must say he has done quite well with the new songs he wrote, especially “Look Down, Lord.” I’m almost surprised there is no music in the song, but it works still. And the song and its melody are sprinkled through the score as a kind of prayer request from the citizens of Rosewood. “Freedom Train” is also very stirring as the women and children are put on the train to Gainesville.

There aren’t too many cues on the CD that sound too familiar, and that’s something that is hard to do for about 45 minutes of scoring. There’s a lot of drama, romantic hintings and a lot of action, especially in “The Hounds of Sumner” and “False Accusation.” I especially like the use of harmonica, acoustic guitar and jaw harp through the score. It’s almost reminiscent of Williams’ first major score, The Reivers, with its feel of Americana and serenity. Of course Williams tears all that down right away, but the way he makes us feel at home in Rosewood for the first 45 minutes (this is covered in “Scrappie and Mann Bond” and “Mann at Rosewood”) is something to behold. I think the trouble most composers fall into is over-emotionalizing the drama on the screen, but here Williams lets it speak for itself (and adds his touch where necessary).