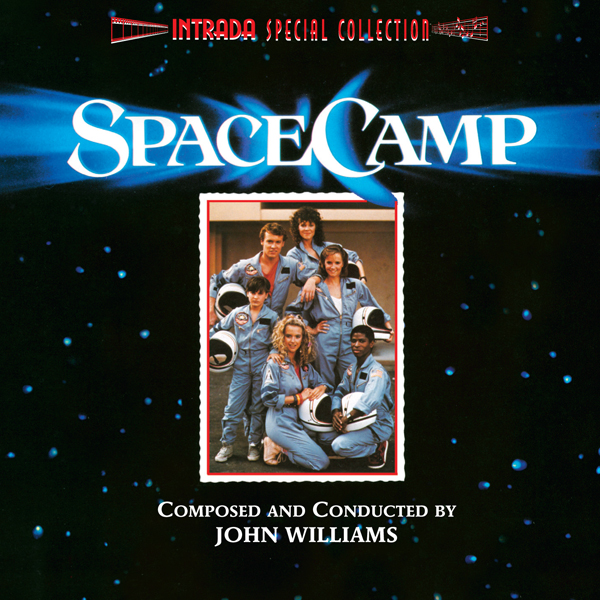 I’m sure after John Williams saw SpaceCamp, he knew it wasn’t going to be like his former space scores, which made him a household name. Instead, SpaceCamp appears to be geared for the younger set, and like the chameleon he is, Williams wrote a score that would appeal to them, but still have an impact on parents who were dragged to see the film with their kids. Four years later he pulled off the same trick with Home Alone, and it became a critical and commercial success.

From the opening credits to the finale when the shuttle lands in Arizona, the score to SpaceCamp is like a dream. Full of wistful woodwinds and restrained brass, this score seems almost out of place with the other scores Williams wrote in that time frame — namely the Indiana Jones films and The Witches of Eastwick. Comparatively, this score whispers its way along, but its dreamlike sound is used for the same effect the tracked music in 2001 was for: to make space seem like a ballet, a place where your senses are numbed. When we pan down from the vast space into the eyes of a wishful young girl dreaming of becoming the first woman astronaut, we know that this film is going to inspire all of us to achieve our goals. Williams’ score helps that desire along as well. When Jinx, the humanoid robot that befriends young Max, sabotages the NASA computer, the orchestra swells with hope, and when the trainees reach Cape Canaveral and see the space shuttle we hear a grand statement on brass.

In space however, the tone of the score changes dramatically. Though the kids manage to find themselves in a lot of tight situations, Williams refrains from making his music sound suspenseful. Rather, he keeps the feeling light, giving us a sense of hope that everyone will return safely. Even during the two highest moments of suspense, when Max floats out into space and Andie gets trapped outside the shuttle, the score stays quiet (save for a few hits during Andie’s accident) and keeps us from wringing our hands in fear. After all, this is a kids’ film; we wouldn’t want the kids to run out of the theater.

Finally the shuttle gets back to Earth, and while the film ends too quickly, we get a feeling of resolution during the end credits, where Williams makes a brief reprise of the music used in the opening credits, then lulls us with a gentle harmony.

The only fault with this score has to come from the ‘Training Montage’. It seems very out of place to use a pop-synth arrangement, and it is very distracting. I was hoping for something along the lines of Rocky or Chariots of Fire, but here he makes an amateur mistake — composing music that clashes with the feel of the scene, both on film and on the CD.

The score deserves a better listen on CD because the sound quality of the score is heard better, and a lot of subtle parts are understood more when removed from the sound effects. On CD the score sounds more like a symphonic effort written alone but at the same time it works as a film score because it underscores the characters’ emotions and actions very well. Another standout of this score is that it has no real main theme to tie it together, but nonetheless its tone provides the glue. While the tone of the score really surprised me, I was glad to see that Williams was able to slow down his tempo and write something so tame and low-key. Surely it isn’t a score that will be highly remembered, but it is one that may turn out to be a study in contrast.