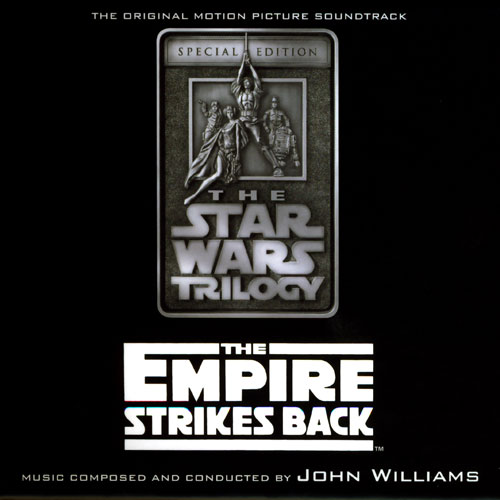 I think 20th Century Fox was glad George Lucas decided to rerelease the Star Wars trilogy because it gave them a reason to finally release the entire score for every film. Music fans were mostly excited to finally get the full score to The Empire Strikes Back, as this score was the one that has had the most of its beautiful score omitted from previous CD releases. My older brother used to have the original LP, and I remember him playing it over and over and over and over again, to the point that as a very young child I got hooked on that score and it has stayed with me ever since.

Another advantage the new release has over the previous ones is that finally the tracks are in chronological order! Not only does this make for an easier listen, but you don’t have to worry about trying to program your CD player to get in the order you want. An added plus is the inclusion of cues not used in the film, such as the music used when Han returns to the base at the beginning of the film and the attack on the probe droid.

It’s hard to say why this score has been deemed the best in the trilogy, but in my opinion it is because Williams has a lot more music, visuals and mood to draw from. This film is notably darker than its predecessor, as many middle films in trilogies are. As a consequence, the score uses moodier strings and lowers the register on many other instruments in the orchestra. Even the score for the battle on Hoth seems to have a gloomier tone than the final battle in Star Wars, probably because the Rebellion is outnumbered. No one can argue that The Imperial March is the most ingenious theme ever written, and I find it even better because the first nine notes are put through so many twists and turns through the film that you don’t think that the theme is overused at all. My two favorite uses of the theme (outside of the first use when we are introduced to the Empire) are at the beginning of “The Asteroid Field” and during “Clash of the Lightsabers.” Kudos has to go to Williams and orchestrator Herbert Spencer for finding the right instruments to bring out the horror and true evil of Vader.

The other new themes in the film, Yoda’s Theme, Han and Leia’s Theme and the droids’ theme, are absolutely fitting for the characters. Yoda’s Theme draws from the original Force theme, but is more fun and playful. The love theme takes Leia’s theme from Star Wars and makes it flowing and the strings make it soar. The rendition that sticks out in my mind the most is at the end of “Clash of the Lightsabers,” when Leia, Chewie, Lando and the droids manage to escape from Bespin. The inclusion of brass makes the theme more triumphant and never fails to get me choked up.

While this score definitely stands out from Star Wars and Return of the Jedi, it doesn’t try to stand on its own. If it hadn’t continued where Star Wars left off, or ended as an unfinished symphony for Jedi, then it may not have been as much of a success as it was. This is definitely the jewel in a most distinguished crown in John Williams’ career.