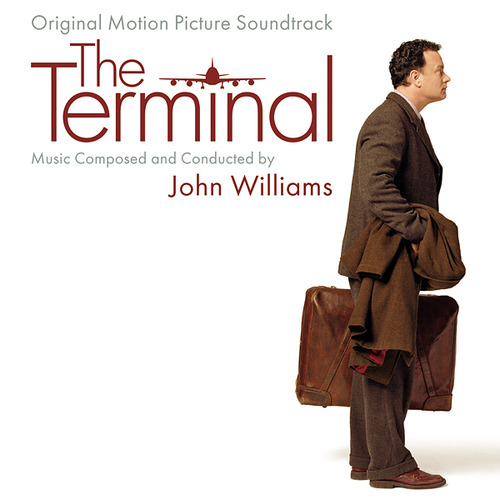 If you don’t want to edit tracks and just want a mostly chronological album, do this:

NOTES ON THE ALBUM TRACKS:

A concert arrangement of Viktor’s Theme.

[0:00-2:00] The workers of the airport terminal pass around copies of Viktor’s photocopied hand. Viktor’s Theme is used.
[2:00-end] I don’t know what this music is, but it could be “Preparing for Dinner”… except that its 20 seconds shorter. Perhaps the scene was lengthened after Williams scored it so they just repeated portions of the middle of the cue to pad it out? That’s what it sounds like to me anyway, but I’m not completely sure yet. Regardless, its just Viktor’s Theme again.

[0:00-1:20] After seeing Gupta’s sacrifice, Viktor marches to the front door as the terminal workers follow.
[1:20-end] Vike walks through the front door into New York. The Love Theme is heard as he sees Amelia outside, then Viktor’s Theme is used as he gets in the cab and Dixon runs outside.

Just like the title says. Covers Viktor’s unvailing of his home made fountain and his and Amelia’s entire conversation about his Planter’s can. The first 2:40 of the cue on the album is identical to the film version. The last minute or so is also the same. It looks like Spielberg asked Williams to rescore the middle after the OST had already been constructed. The Love Theme is used.

Dixon gives Viktor a 5 minute window to escape through the front door. After realizing he is on the security cameras, he chooses not to escape and tells Dixon “I wait!” as his theme plays.

[0:00-0:44] The Krakozhia National Anthem. The first 20 seconds of this is used a source music on televisions twice in the beginning of the film.
[0:44-end] Amelia says goodbye to Viktor. Not sure why its titled “Homesickness”

It looks like this is William’s original plan for the cue (It still lines up with the movie). It starts when Viktor has just been told how much Canneloni costs and continues through his search for a job, his long wait for the call-back from the Discovery Store guy, and his arrival at the abandoned gate where he gets the idea to paint the wall and begins scraping. It is based around the same theme that “Officer Torres” is. The entire cue ended up being dropped from the film. Williams wrote a new cue based on Viktor’s Theme to cover the job search, but the film contains no music during his phone call with Discovery Store guy and his walk into the abandoned gate.

[0:00-1:18] Just like the title says.
[1:19-end] I don’t know what this music is. Perhaps this is material purposely created for the OST to flesh out the ideas from the film cue?

This track is horribly titled. Its just the final scene in the movie and the first half of the end credits. Contains the Love Theme and Viktor’s Theme.

The second half of the end credits. Contains the Love Theme