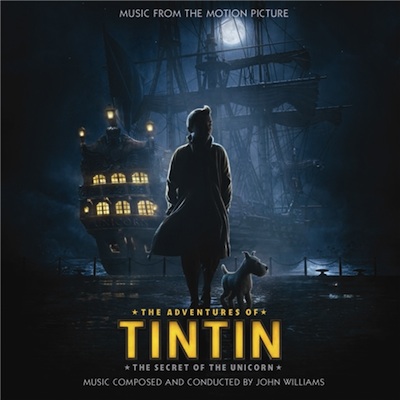 THE ADVENTURES OF TINTIN

THE SECRET OF THE SCROLLS

INTRODUCING THE THOMPSONS AND SNOWY’S CHASE

SIR FRANCIS AND THE UNICORN

RED RACKHAM’S CURSE AND THE TREASURE

THE PURSUIT OF THE FALCON

THE CLASH OF THE CRANES

THE RETURN TO MARLINSPIKE HALL AND FINALE

The first details of the score for The Adventures of Tintin: The Secret of the Unicorn were revealed by orchestrator Conrad Pope in August 2009:

I’m currently orchestrating a large piece with a number of ideas.The main theme is highly energetic, filled with great tonal twists and turns, reflecting, I suspect, Tintin’s heroic energy. It will become a classic, I think. To give more information would be to reveal things that I don’t think JW would want to say.

We are at the beginning of the process. The main scoring sessions are off in February 2010.

Also, let me say with regard to Tintin, I believe, as with “Potter”and Catch Me if you Can, people will be both surprised and not surprised by how the music is both “expected” and “UN-expected”— before you hear it.

Williams will return to the scoring stage in July 2011 to complete the recording of the score.

Also, American soprano Renee Fleming was recorded singing with a 69-piece orchestra at the Manhattan Center Studios in NYC forTintin, while Steven Spielberg and John Williams attended the special session from LA:

Renee Fleming was recorded singing live with a 69-piece orchestra in the Grand  Ballroom and adjacent Studio 7, equipped with the massive 108-input Neve VR, for Steven Spielberg’s animated film Tintin. Two video crews were present at the sessions, one for a polycom set up allowing Spielberg and composer John Williams to attend the session from LA. The  second crew performed motion capture, which will allow the film’s animators to capture Fleming’s facial expressions exactly for her animated character.  Todd Whitlock was the engineer on the session.

“Tintin is your typical ‘quirky’ Williams comedy adventure score. With some accordion, sitar, saxophone thrown in. There are a few memorable action cues, but IMO it doesn’t come close to War Horse in terms of creative and intelligent content – not to mention sheer beauty.
To put it in comparable terms…

“You have to understand that I must be careful in my answers to not give away actual descriptions of music as that could get me into trouble.

But I will say that the pinch of Jurassic Park is a bit of half-action music…more just intense (I don’t mean scary) and millitaristic brass figures…except in Tintin it’s an actual action cue that is sped up. But it’s only the beginning of the cue. Trust me, if the whole of Tintin was on Jurassic Park‘s level, I wouldn’t be complaining about a thing! It’s a good solid John Williams score. But it’s just that. Whereas War Horse is one that made me go ‘Wow…this is why I wanted to be a composer'”

“Tintin is a bit more like his general action music BUT there are several cues that achieve more than that. (There are a lot of moments of excitement in Tintin)”

“The score does not feel jumpy at all. All of the ethnic instruments are used either to emphasize a brief filmic moment, or to evoke a certain tone in the music. It doesn’t jump from classic Williams orchestra to jazz saxophone from one cue to the next. Think the way Terminal had accordion in the main theme and throughout…it worked because it blended.”

“Quite the contrary in regard to the themes…each theme is used extensively in Tintin. Almost every cue has at least a touch of the several themes. I wouldnt’ say they are developed that much over time…pretty much what you first hear is what you get from them. Sort of like Indy’s theme…sometimes it is fast and adventurous…sometimes it is slow and thoughtful…but it doesn’t really morph that much over the film.”