One of the great joys of my career as a member of the Boston Symphony has been the opportunity to work with composer/conductor John Williams. John needs no introduction – his name is synonymous with the genre we call film music, with his soundtracks to Star Wars, E.T., Jaws, Raiders of the Lost Ark and a host of other films being well known to millions of people. John was conductor of the Boston Pops Orchestra when I joined the Boston Symphony and we have enjoyed a very nice friendship over the years. In addition to making many CD recordings with him and the Boston Pops, I’ve been soloist with the Pops with John on the podium on two occasions – in performances of his Tuba Concerto (I was the first bass trombonist to play the piece on bass trombone) and Simon Proctor’s Serpent Concerto. In addition we have played concerts together that are too numerous to count, as well as recording the soundtracks to two of his movie scores, Schindler’s List and Saving Private Ryan. 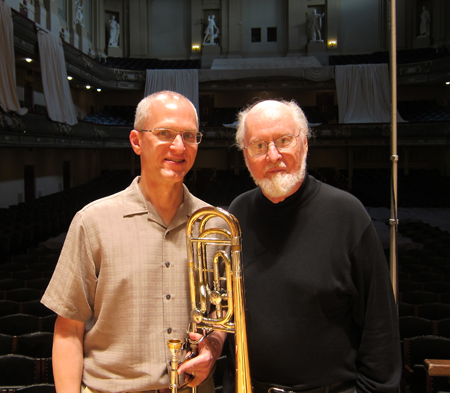 Last week my wife and I were on vacation in Arizona, continuing our preparations to move there in a few weeks. As is sometimes the case, a last minute recording session with members of the Boston Pops materialized and while my participation was not mandatory (since I was officially on vacation from the Boston Symphony), I could not miss the opportunity to record a new fanfare by John Williams. So I took a “red eye” flight overnight from Phoenix to Boston, played the recording session in Symphony Hall, and turned around and flew back to Arizona – all in 24 hours.

But it was worth it. 2012 is the 100th anniversary of the opening of Fenway Park in Boston, home of the Boston Red Sox. John Williams had been asked to compose a fanfare to celebrate the occasion and he composed it for members of the Boston Pops Orchestra brass and percussion section. I’ve recorded several of John’s other fanfares over the years, his Liberty Fanfare and several of his Olympics fanfares including, The Olympic Spirit and Summon the Heroes. This new fanfare was composed for six trumpets, six horns, five trombones, two tubas, percussion and timpani. The recording session was held at Symphony Hall in Boston.

It is such a thrill to be a part of a recording session such as this. No concerts or rehearsals preceeded it – we just sat down and started playing for the
microphones. The Fanfare for Fenway has that John Williams “signature sound” and in a few hours, we had recorded the full fanfare, a 30 second version and a short “loop” of the piece that can be used on television. The trombone section consisted of BSO players Toby Oft and Steve Lange, and Karna Millen (US Coast Guard Academy Band) and Adam Rainey (bass trombone student at New England Conservatory of Music).

The photos accompanying this entry tell a little of the story – John Williams and me together during a break in the recording session, and my view of the podium through recording equipment. Perhaps you’ll hear the Fanfare for Fenway sometime during the 2012 Major League baseball season. I know that when I hear it, I’ll be smiling, remembering a nice moment in time. 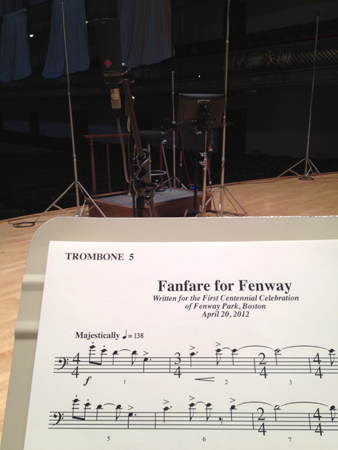