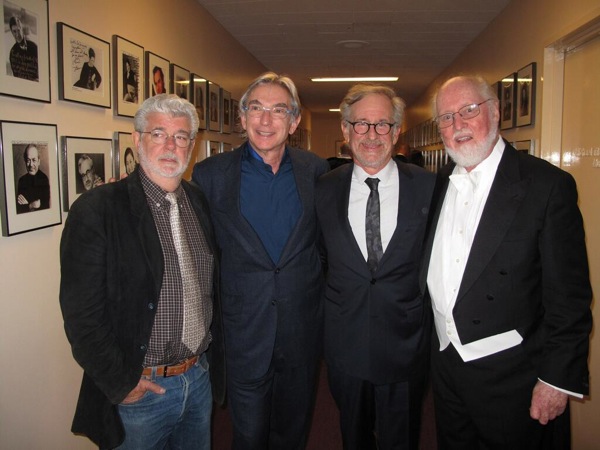 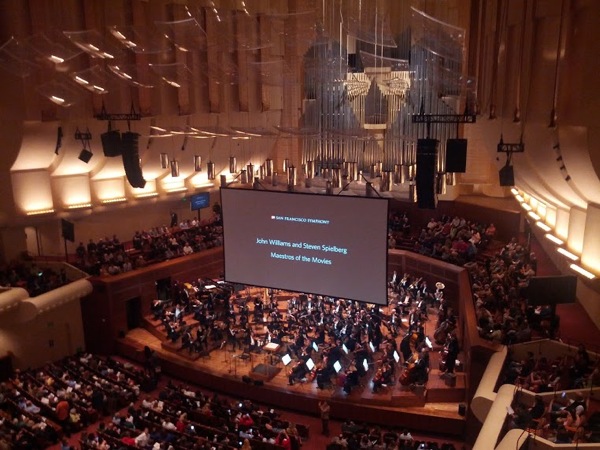 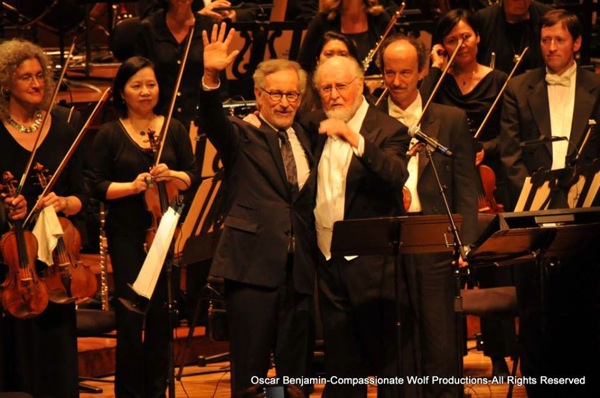 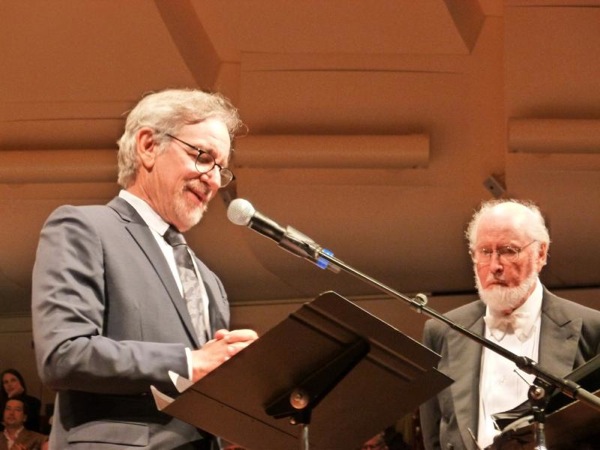 I have to say, this concert was one of the most memorable I’ve ever been to. Even though Williams didn’t have the boundless energy that he’s displayed in the past, it was a pleasure to witness him still in command of a great orchestra and playing beautiful new music. And of course, a rare chance to witness Spielberg rapturously appreciating the music of his own films. Truly wonderful.

I just wanted to join the comments on how magical this evening was.  I was in the front row, off center to the left, about ten feet from Mr. Spielberg.  What a challenge deciding whether to watch Mr. Williams conduct, watch Mr. Spielberg listen to the music, or to merely lose myself in the music.  I did all three, of course, constantly shifting between the three.  Some highlights for me were Far and Away, War Horse, and Jaws of course.  Watching Mr. Williams’s expressions as he conducted with such an authoritive attention to detail, at times reaching out to various sections of the orchestra, gesturing for them to dig deep into a particular passage, was magic.  Also, watching Mr. Spielberg’s expression as he nodded to himself during the soft notes toward the end of Close Encounters, or how it looked like he was stabbed in the heart during the high note during the violin solo toward the end of Schindler’s List, or actually making eye contact with Mr. Spielberg and exchanging goofy enthusiastic grins during The Raiders March…all incredible moments.  Then, to cap it off, I confess that when they were walking off stage I couldn’t help but call out “Thank you!” when they were three feet away, at which point Mr. Spielberg turned and said “Thank YOU.”  An unforgettable evening in so many regards.  Anyway, thanks for letting me gush and blab.  I recorded the whole thing on audio and it turned out pretty well, but I’m not sure I can post the whole thing to Youtube.  Any ideas?  Here are a few pictures I took as well...

Just got back…the concert was great!  I was seated Center Terrace behind the orchestra (where the choir would stand).  We got a great view of the maestro (although during the video clips the screen covered the top of his head).  I’ve only ever seen him conduct the LA Phil at the Hollywood Bowl, but I felt the performances were a lot stronger–faster tempos, less mistakes, better mix.  Part of that is probably due to being inside a concert hall vs outdoors.  Also the brass players (especially trumpets) were playing into their music stands, so the sound reflect off the stands and right onto us.  I loved it–as a trombone player, I am more than happy with a brass-heavy performance.  It was surreal to see Spielberg so close and hear him talk in person.

The program was the same one listed online, except for the addition of Jaws Theme right after intermission and, for encores, With Malie Towards None (retooled concert version) and Raiders March.  The only weird programming decision was playing Hedwig’s Theme and then directly after “Nimbus 2000” from the Children’s Suite.  The former features the Nimbus theme extensively, so hearing its concert version directly after was a little odd.  As a brass player I would’ve loved to hear “Quidditch” instead of Nimbus, and it would have solved weird programming decision.

My favorite was probably Far and Away, since I’ve never heard it live before (it was not the violin solo version available on Greatest Hits).  I also don’t think I’ve ever heard the suite–it was all very familiar, I think it was just the first track of the OST plus the End Credits.  War Horse was beautiful as always, with great flute solos.  Indy’s First Adventure was really fun–I’m glad they did the entire scene, instead of cutting it off midway like they did on the LC OST.  There were also a few new bars (besides the slightly tweaked ending) when Indy falls into the lion’s train car.  E.T. was also fantastic.  Really they all were, it’s not even worth listing my favorites because sooner or later I will list them all.  Violin soloist was beautiful on Schindler’s List.

The audience reaction seemed to be more enthusiastic than at the Bowl–again, that’s probably mostly due to being indoors versus outdoors.  While I was fully expected laughter during the first few notes of Jaws, the enthusiasm and strength of it surprised me, so much that I started laughing too.  Spielberg said “We’re definitely coming back to SF!” during one of the many standing ovations we gave–I wonder if he says that at every gig.  I hope not, because I would love to do this again.  Overall it was a fantastic performance and a really really fun night.