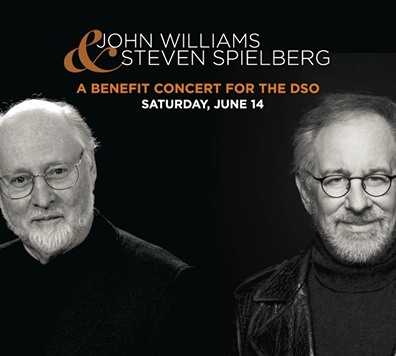 This was a beautiful concert! The players really poured their hearts into it, and it was incredibly moving to see Williams and Spielberg together on stage. – Full report with program rundown

What a fantastic concert. I’ve only seen Williams’ music played once before, also at the DSO, but this time was even better. I felt like I was listening to original recordings of most of the pieces that were played. It was magnificent.

One of the most awesome things to see was despite the fact that Williams is a man in his 80s who needs to support himself a little bit when he gets on and off the podium, once he starts conducting, you’d never know it. It’s absolutely brilliant. He has total control of the orchestra and seems to move so fluidly.

Spielberg was much stronger when he was just talking off the cuff. When he was trying to read notes, it just came across a little forced. I would have loved to just hear him tell stories about their time together over the course of 41 years. But after he came out, it was such a surreal moment watching Williams conduct the orchestra while Spielberg watched clips of Close Encounters being played. It’s a sight I never expected to be able to glimpse in my lifetime, that’s for sure.

I was really hoping for Jurassic Park since I’ve yet to hear it live, especially because it definitely could have fit in the program, which ended up feeling a little repetitious with the orchestra playing Marion’s Theme and then having an encore of the Raider’s March which has a significant portion of Marion’s Theme in it. Although I will say that showing clips of classic film beauties during “Marion’s”, and the sword fighting montage during “The Duel” were really fun ways to mix it up.

All in all, I still don’t know if it’s really hit me what I saw. I have been a huge fan of both of these men for as long back as I can remember and having this opportunity was definitely a once in a lifetime experience.

BIZARRE SIDE NOTE: Kid Rock was there and when they finished playing “E.T.” he yelled out “E.T!”, looked at a guy sitting next to him, shrugged his shoulders, and then left, not even staying for the encores.