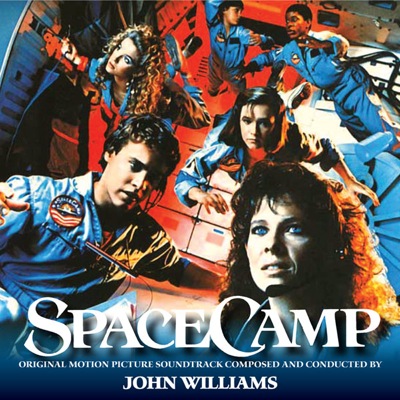 A John Williams score that should never be out of print is back! Same contents as Intrada’s previous release. (Owners of that CD need not apply.) Harry Winer film with Kate Capshaw, Tom Skerritt, Lea Thompson, Kelly Preston and very young Leaf (Joaquin) Phoenix sends team of student astronauts into space with disasters at every turn. Picture offers glimpse into real world of astronaut training program albeit exciting make-believe adventures take front and center. John Williams creates one of his most exhilarating scores of all time, aiming his large orchestra towards the awe and spectacle of discovery in outer space.

Back by popular demand, Intrada reissues a previous Special Collection release that sold out all too quickly. The 1986 film SpaceCamp tells the story of a group of kids at space summer camp who accidentally lift off in the space shuttle during an engine test and struggle to get back to earth. One of the strongest elements of the film is the graceful, powerful score by John Williams. In lieu of different themes for the human characters, Williams opted to develop a series of motifs that reflect the adventure of space flight. The main theme is constructed of ascending phrases, just like the composers principal melodies for Star Wars, Superman and E.T., but while those earlier themes depicted an heroic sense of flight, SpaceCamp‘s theme opens more slowly, attaining its goal gradually and with humility.

The original album for SpaceCamp runs a generous 49 minutes and was initially released by RCA Records on LP and re-issued in 1992 on a very limited Japanese edition from the SLC label that went out of print quickly. Intrada’s previous reissue in 2010 also sold out quickly. Although the album was not presented in narrative sequence, it was a strong listening experience assembled by Williams and that original 14-track program has been retained here.