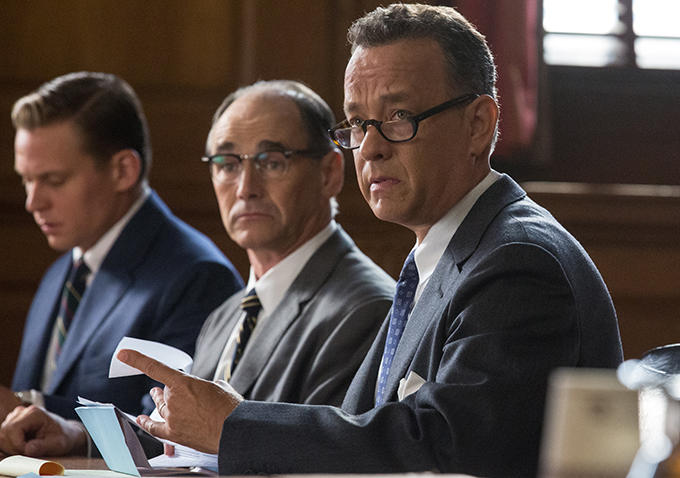 In addition, 12-time Oscar® nominee Thomas Newman (“The Second Best Exotic Marigold Hotel,” “Saving Mr. Banks”) has been signed to score the film, as John Williams’ schedule was interrupted and he was unavailable to score the film due to a minor health issue, now corrected.

A dramatic thriller set against the backdrop of a series of historic events, “Bridge of Spies” tells the story of James Donovan (Hanks), a Brooklyn lawyer who finds himself thrust into the center of the Cold War when the CIA sends him on the near-impossible task to negotiate the release of a captured American U-2 pilot. Screenwriters Matt Charman and Ethan Coen & Joel Coen have woven this remarkable experience in Donovan’s life into a story inspired by true events that captures the essence of a man who risked everything and vividly brings his personal journey to life. The film will be released in theaters nationwide on October 16, 2015.

Williams, whose credits include “Stars Wars: The Force Awakens” and the “Harry Potter” films, will join Spielberg on his next film, “The BFG,” beginning later this year, continuing their unprecedented collaboration which they have enjoyed for over 40 years.

Newman has scored many films for DreamWorks, including “The Help,” “Road to Perdition” and “American Beauty,” the latter two for which he received Academy Award® nominations for Best Original Score.

Fox 2000 Pictures co-financed “Bridge of Spies” with Dreamworks in association with Participant Media, and will distribute internationally. Disney will handle domestic distribution. In addition to directing, Spielberg will produce the film with Marc Platt (“Into the Woods,” “Drive”) and Kristie Macosko Krieger (“Lincoln”), with Adam Somner (“The Wolf of Wall Street”), Daniel Lupi (“Her”), Jeff Skoll (“The Hundred-Foot Journey”) and Jonathan King (“Cesar Chavez”) serving as executive producers. The screenplay is by Matt Charman (“Suite Francaise”) and three-time Academy Award® winners Ethan Coen & Joel Coen (“No Country for Old Men,” “Fargo”).

DreamWorks Studios is a motion picture company formed in 2009 and led by Steven Spielberg in partnership with The Reliance Anil Dhirubhai Ambani Group. The company’s recent releases include “The Hundred-Foot Journey,” starring Helen Mirren, Om Puri, Manish Dayal and Charlotte Le Bon and directed by Lasse Hallström based on the best-selling novel by Richard C. Morais, and the car-racing actioner “Need for Speed,” starring Aaron Paul. Other releases include: THE COMEDY “Delivery Man,” starring Vince Vaughn; Steven Spielberg’s “Lincoln,” starring Daniel Day-Lewis, Sally Field and Tommy Lee Jones, which grossed over $270 million at the worldwide box office and was nominated for 12 Academy Awards® with Daniel Day-Lewis winning for Best Actor; “Real Steel,” starring Hugh Jackman and directed by Shawn Levy; Spielberg’s “War Horse,” based on Michael Morpurgo’s award-winning book and nominated for six Academy Awards including Best Picture; and “The Help,” which resonated with audiences around the country and earned over $200 million at the box office and received four Academy Award nominations with Octavia Spencer winning for Best Supporting Actress. Upcoming films include “The Light Between Oceans,” directed by Derek Cianfrance and based on the novel by M. L. Stedman, which stars Michael Fassbender, Alicia Vikander and Rachel Weisz and “The BFG,” based on the beloved novel by Roald Dahl, starring Mark Rylance and to be directed by Spielberg.