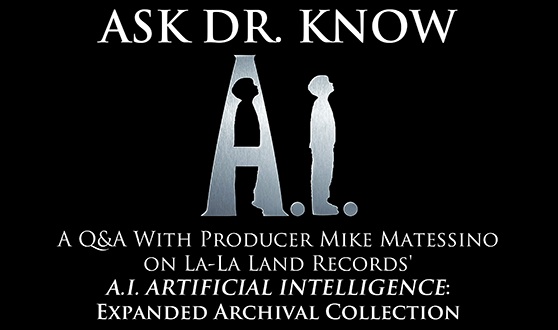 Hello Mike, thanks for taking the time to answer some questions about this new release!

How did this project come to happen? How long has it been in the works?

A.I. has been on the boards as long as Empire of the Sun and I actually did the preliminary work on it first. When it became apparent that I needed to pitch doing it as a 3-CD set, the fellows at La-La Land and I decided to go for Empire of the Sun first. So the interaction with Mr. Williams and Mr. Spielberg was the same, and in tandem, with Empire of the Sun. It starts with John being happy with the presentation and with the sound quality. Steven Spielberg will defer to John on this and rarely ask for a change. He does like to have a look at the notes and the packaging, photo selections, etc. as he likes to make sure his movies are represented well.

What was the source material used for the new released? How does the mix and/or mastering differ on this release compared to the original soundtrack album?

The two versions of the song “For Always” came from the album master and everything else came from the unmastered final digital mixes done in 2001. So the mixes are the same but all the performance edits were re-created and the mastering is newly done. I cleaned up a few things and gave it some polish, and I think we’ve got a nice increase in quality without changing the basic sound.

Did John Williams request any changes to a traditional chronological order in order to enhance the listening experience?

The only change John suggested was that the section of music from the original release that his son Joe composed be presented in it entirety as a bonus track. On the original album an excerpt of it appeared in the midst of a track called “The Moon Rising,” but that track itself was not assembled chronologically. On the 2-CD Academy “for-your-consideration” promo, I think the track was in order but still not complete. The cue called “The Biker Hounds (extension)” is the full length cue by Joseph. I’d initially assembled it as a 7-1/2-minute “extended version” of “The Moon Rising,” but this time around the feeling was to present John’s score only. Joseph’s piece was included because it was on the original album.

What other source cues did Joseph compose for the film, and do they appear on the new set?

Besides “The Biker Hounds (extension),” Joe composed “Rouge City Jazz” and “Rouge City Rock.” The first one plays when we first see Gigolo Joe on the street. It’s reused later as a piece called “Joe’s Helicopter Cue,” which replaces the saxophone overlay with synthesized brass chords and other electronic elements, but it’s the same recording underneath repeated from earlier. It was decided to not include them on the set as they are not in character with the rest of the score.

When the soundtrack was originally announced, it was to be 13 tracks of score only. The tracklist was later revised and two score tracks (“Under The Ice” and “Almost Human”) were removed and replaced with the two versions of the pop song “For Always”. What did you learn about this “early version” of the album, and was “For Always” recorded later than everything else in the score?

Strangely all the documentation I came across about the album reflected the version as it was released so I don’t know if that original announcement was on the level. The songs were definitely recorded after the scoring was completed, however.

In the special features on the DVD, we see John Williams discussing how Stanley Kubrick wanted Der Rosenkavalier by Richard Strauss to be in the film, which Williams used for the scene where David and Joe drive through the giant face structures on the highway. This moment was edited out of the “Rouge City” track on the original soundtrack album; Is it restored for the new release?

Yes, the cue is presented as recorded, including the Strauss quote.

On the new set, what are the “A.I. Theme” tracks all about?

These were recorded for the album originally – one with Barbara Bonney’s vocal and one without – and apart from the first 20 seconds, listeners have heard the vocal version already! On the original album track “The search for the Blue Fairy,” there is an edit from the cue as heard in the film to this “A.I. Theme.” We now have the two full pieces as recorded, each as the final track of the first two discs.

So then what are the differences are between the three versions of “Finding The Blue Fairy” on the new set?

None of them are the version from the album and none of them are exactly the version from the movie. The track in the main program is the cue as originally intended, with Barbara Bonney’s vocal. As I previously said, the album instead used “A.I. Theme.” The latter part of the cue was also recorded with no vocal, and that is the “orchestral excerpt” track on disc 3. In the movie, there are several cuts back and forth between the vocal and non-vocal versions, apparently based on whether or not certain phrases were interfering with dialogue. I tried to re-create that but when heard on its own the vocal comes and goes in a very clumsy way that makes no compositional sense. It works fine in the film but what was better for this release was to present the vocal and non-vocal versions separately.

The “alternate” is a completely different early version of the cue with the final section (the part replaced with “A.I. Theme” on the original album) in another key. This will give you some idea of the complexity of going through this score to determine what was recorded, how the music was used in the film and how it was presented on the original album. There was a lot of reverse engineering! In fact, it felt a lot like being one of the future SuperMecha trying to analyze how something from the past had been created.

And what are the differences are between the three versions of “Abandoned In The Woods” on the new set? One of them was written to be an End Credits piece, right?

Correct. I think that appeared on the original album twice. It’s on our disc 3 along with a full alternate version. Disc 1 has the final version as heard in the film, including an unused ending that no one has ever heard… but I have no idea what it was meant to accompany!

Is there anything on the original soundtrack album that is not on the new set?

All of the content of the original album is included, but in its complete and unedited form.

What about the 2-disc “Academy Awards Promo”?

That was put together without John’s permission and it’s always been an annoyance that it was sent out and got spread around. In addition to covering all the content of the original album, a goal on this release was also to cover all the content of that promo and effectively render it obsolete. There are many oddities about it such as micro-edits and intercuts on certain tracks that are not that way on the corresponding original album tracks. I had to go through all of it carefully, compare it to the original album, compare it to the movie, compare it to the original cues—it took a very long time to figure it all out. I even had the music stem from the movie transferred for me so that I could hear what was going on. It turned out that elements I thought might have been musical overlays were actually sound effects, or at least they were elements on the sound effects stem.

When all of this research was done it was clear that it would require three discs to cover everything on the promo and on the original album. Fortunately there was more to present, such as Williams’ music for the “Dr. Know” sequence, as well as other cues that had been re-scored which no one’s ever heard. Still, proposing three discs was going to be a challenge, so that’s why we did Empire of the Sun first. Once everyone was happy with how that turned out there was support to move forward with A.I. as three discs.

So we have everything that’s been out there prior to now plus more that hasn’t. The goal in the main program on discs 1 and 2 is to present the score as originally written and recorded in its most complete form. There are two versions of “Journey Through the Ice,” for example, which are quite different from each other. In the movie we hear the first half of Part 1 and the second half of Part 2, so we just present the two full cues in our program. The original album is a completely different experience as is the movie, which has a lot of tracking and looping and sections where the music went completely unused (such as the cue “Immaculate Heart”). The dissecting of all of of this can go on forever, but I’ve done all that work now and have, hopefully, put together a presentation that can just be enjoyed as a musical experience on its own. There’s a precise architecture to the score that really comes through in this full assembly. You get a musical trip through the narrative that, in a way, is unlike anything else John Williams has done. It’s one of his most challenging and ambitious works.

It is clear a lot of hard work went into this release!

Yes, it was hard work, but very rewarding. I’m very grateful to Michael Gerhard and Matt Verboys at La-La Land for giving me the opportunity to do it. The folks at Dreamworks and Warner Bros. were very helpful and supportive all the way through. Jeff Bond did some terrific notes and Jim Titus, as always, delivered a stunning package design. These things are team efforts and I’m very happy with how it turned out.

Thank you for taking the time for us today and for all your continued excellent work!

Thank you, Jason. Be well.

Mike Matessino is a prominent mixer / editor, soundtrack producer and film music preservationist. Visit his website for a complete list of projects he has worked on: www.mikematessino.com

Jason LeBlanc can be reached on the JWFan forums.