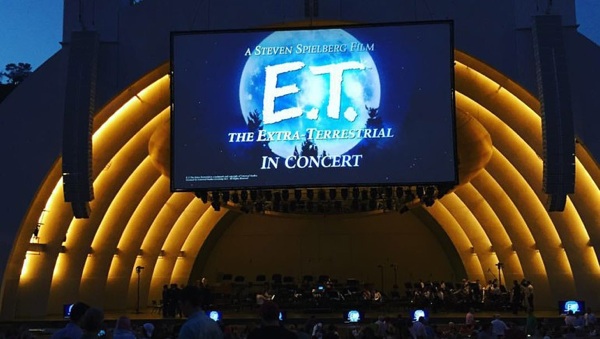 Film Music Society – Williams wrote a new first-act concert ending and an entr’acte for the post-intermission return to the film; the popular concert version of his “flying theme” was heard as a new piece for the end credits. E.T. packs an emotional wallop under any circumstances, but the unique combination of that film on the Bowl’s five huge screens and Williams’ landmark score, interpreted by one of the world’s great symphony orchestras, left thousands in tears and thousands more giving Newman and the Philharmonic extended standing ovations. – Full review

Los Angeles Times – The film was introduced by a pre-recorded video message from Williams, who has been a Bowl mainstay for decades with his popular movie-themed nights. The 83-year-old composer and conductor called the film Spielberg’s “masterpiece.” He went on to welcome the evening’s performers, the Los Angeles Philharmonic and conductor David Newman, who in 1982 played in the violin section during the film’s studio recording sessions. – Full review

Related article: Tubaist returns to the music of ‘E.T.’ after performing for the soundtrack in 1982