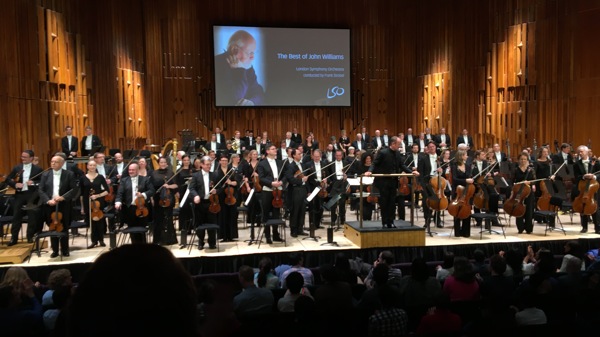 * Introduced by John Williams on video

Excerpt of one of the introductions filmed for the concert:

Devil’s Dance from The Witches of Eastwick

Excerpts from Close Encounters of the Third Kind

Scherzo for X-Wings from The Force Awakens

The Imperial March from The Empire Strikes Back

The LSO gave a fantastic concert of John Williams’ music this evening.  They played Scherzo for X-Wings with such aplomb, finesse and – how can I say? – versatility.

Special mention to the violins today; it’s usually the brass and percussion sections who ‘get the girls’ when it comes to John Williams music, but I thought they were superb.  By the way, the first violinist on the fourth desk nearest the audience is Nigel Broadbent, who played on the original soundtrack of Raiders of the Lost Ark.  I think he could be the last of the LSO musicians still with the orchestra to have played for Williams when the maestro recorded his classic scores with the LSO in the late 70s and early 80s.

Close Encounters was perhaps my favourite selection of the evening.  To expand on what I said earlier about how great the violinists were, the opening of the Let There Be Light segment as it passes from first violins to second violins to violas to cellos sounded so perfectly together.  Often when the suite is played it is as if the violin players are starting a split second before or after the rest of the section or making the big crescendo at different rates (if that makes sense), but that was not the case yesterday.  It was great too that the LSO did not cut out the challenging middle part of the suite that some orchestras do.

I loved how in Jaws the string players played every stabbing note with a down bow, rather than alternating between up and down bowing (which is easier to play).  If you get it wrong it can sound very spiccato when the music is quick, but it actually sounded very scary; I think the LSO is the only orchestra that I have heard play the theme without anyone in the audience laughing!  I also thought their articulation was excellent, for example with the very fast notes in Hedwig’s Theme where with some lesser orchestras you can hear the first and last notes of each phrase clearly but the ones between them are elided into a bit of a mess.

He told the same old Schindler’s List story (“They’re all dead!”). He didn’t think there were going to be war Star Wars film etc etc. Spielberg cut the last scene from ET to JW’s music. He wrote and recorded the trailer music for HP in LA and sent it to WB and they said it should be the main theme.

He also said something (on Indiana Jones 5) along the lines “I hear Steven is planning a fifth one so I may have to start lifting weights” – That’s not a direct quote but Indy 5 seems to be one of those “If I can I will” scores.

The performance itself was so crisp and clear (especially the brass). I’d forgotten how good the acoustics are in the Barbican. Scherzo for X-Wings was particularly impressive (they took at at the tempo that JW seems to be conducting at his concerts). They played “Dartmoor, 1912” but it was more like a War Horse concert suite. They also played a concert suite of the Shark theme from Jaws which I hadn’t heard properly before.

The concert was simply fantastic. The LSO was in top form. And Strobel really knows this music, AND what it can do in a concert performance. I’m with Karol on CE3K – that’s always a highlight by default. Olympic Fanfare was also special because I’d never before expected to hear it live. But another personal highlight for me was the Star Wars main title. I’ve heard a few live performances of it before, and most were good, some were really good. But yesterday’s was one of the best takes on it I’ve heard – live or recorded. Strobel always stayed true to the written music, but he was never a slave to the strict film tempos. He freely used rubatos to let the music breathe, and the result was a SW main title that probably came closer to my beloved Gerhardt interpretation than any other.

But the whole thing was great really. I was practically in tears from 3 seconds into Superman until the last note of the concert.

I found the whole concert to be first-rate, at least regarding film music concerts it must have been the best performance I’ve ever seen. Such crisp, on-point tutti playing from an enormous brass section (5/5/4/1) in perfect sync…

I was especially awed by the first half (“Theme from…”) of the Jurassic Park medley, apart from the missing choir it must have been the best performance I’ve ever heard of it, live or on CD (including the film version from Journey to the Island). It had the quasi-religious awe of the original, supported by an impeccable legato arc over the whole piece that’s mostly missing from re-recordings (usually due to too much emphasis on the rhythm underneath) with, as Marian mentioned, the addition of some perfectly placed rubati too milk some build-ups for maximum effect. A pity that the island fanfare afterwards was “just” very good – all versions of it that I know, apart from the statement in the original Journey to the Island, are missing something that’s difficult to describe… perhaps in the performance of the lead trumpet.