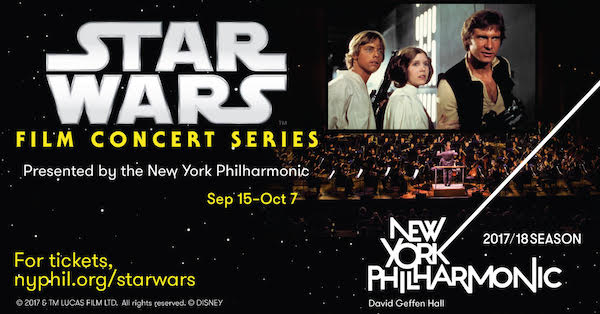 TICKETS TO THE GENERAL PUBLIC ON SALE NOW

Tickets are on sale to the general public today, May the 4th, for the New York Philharmonic’s presentation of the World Premiere of the Star Wars Film Concert Series, September 15–October 7, 2017, featuring screenings of the complete films A New Hope, The Empire Strikes Back, Return of the Jedi, and The Force Awakens with Oscar-winning composer John Williams’s musical scores performed live to the films. The concerts will be led by acclaimed conductor David Newman.

Since the release of the first Star Wars movie nearly 40 years ago, the Star Wars saga has had a seismic impact on both cinema and culture, inspiring audiences around the world with its mythic storytelling, captivating characters, groundbreaking special effects, and iconic musical scores composed by Williams. Fans will be able to experience the scope and grandeur of these beloved Star Wars films in a live symphonic concert experience, as the Star Wars Film Concert Series premieres from September 15 through October 7 at David Geffen Hall in New York City. Legendary composer Williams is well known for scoring all seven of the Star Wars saga films, beginning with 1977’s A New Hope, for which he earned an Academy Award for Best Original Score. His scores for The Empire Strikes Back, Return of the Jedi, and The Force Awakens each were nominated for Oscars for Best Original Score.

Williams has won five Academy Awards, four Golden Globe Awards, seven British Academy Film Awards, and 22 Grammy Awards. With 50 Academy Award nominations, Williams is the Academy’s most nominated living person and the second most-nominated individual in history, after Walt Disney. In 2005 the American Film Institute selected Williams’s score to 1977’s Star Wars as the greatest American film score of all time. The soundtrack to Star Wars also was preserved by the Library of Congress in the National Recording Registry, for being “culturally, historically, or aesthetically significant.” Williams was inducted into the Hollywood Bowl’s Hall of Fame in 2000, and he received the Kennedy Center Honors in 2004, the National Medal of Arts in 2009, and the AFI Life Achievement Award in 2016. Williams has composed the scores for eight of the top 20 highest-grossing films at the U.S. box office (adjusted for inflation).

The Star Wars Film Concert Series is produced under license by Disney Concerts in association with 20th Century Fox and Warner/Chappell Music.

Artist
David Newman is one of today’s most accomplished creators of music for film. In his 30-year career he has created the scores for more than 110 films, ranging from War of the Roses, Matilda, Bowfinger, and Heathers to the more recent Five Flights Up and Serenity. His music has brought to life the critically acclaimed dramas Brokedown Palace and Hoffa; top-grossing comedies Galaxy Quest and Throw Mama from the Train; and award-winning animated films Ice Age, The Brave Little Toaster, and Anastasia. Mr. Newman holds an Academy Award nomination for his score to Anastasia, and was the first composer to have a piece — 1001 Nights — performed in the Los Angeles Philharmonic’s FILMHARMONIC series, conducted by Esa-Pekka Salonen. Mr. Newman is also a highly sought-after conductor, appearing with leading orchestras throughout the world, including the New York Philharmonic, Los Angeles Philharmonic, San Francisco Symphony, Royal Philharmonic Orchestra, Deutsches Symphonie-Orchester Berlin, Schleswig-Holstein Festival Orchestra, San Diego Symphony, Boston Symphony Orchestra, Philadelphia Orchestra, and The Cleveland Orchestra. The son of nine-time Oscar-winning composer Alfred Newman and an active composer for the concert hall, David Newman has composed works that have been performed by the Los Angeles Philharmonic, Indianapolis Symphony, and Long Beach Symphony, as well as at the Ravinia Festival, Spoleto Festival USA, and Chicago’s Grant Park Music Festival. He also composed a violin-orchestra suite for Sarah Chang based on the songs from West Side Story. Passionate about nurturing the next generation of musicians, Mr. Newman serves on the Board of the American Youth Symphony, a 51-year-old pre-professional orchestra based in Los Angeles, and in 2010 he served on the faculty of the Aspen Music Festival in the Film Scoring Program. David Newman made his New York Philharmonic debut conducting the score of West Side Story live to the complete film in September 2011; he will have most recently appeared with the Orchestra in May 2017, leading the New York Premiere of E.T. the Extra-Terrestrial in Concert.

Programs for Families at the New York Philharmonic are presented by Daria and Eric Wallach.

Emirates is the Official Airline of the New York Philharmonic.

For press tickets, call Lanore Carr in the New York Philharmonic Communications Department at (212) 875-5714, or email her at carrl@nyphil.org.

ALL PROGRAMS SUBJECT TO CHANGE

What’s New — Get the Latest News, Video, Slideshows, and More