On Sunday, July 16, Andris Nelsons and the BSO were joined by violinist Anne-Sophie Mutter for the world premiere of “Markings” for solo violin, strings, and harp, a piece specially written for her by John Williams. Tchaikovsky’s Violin Concerto and Berlioz’s Symphonie Fantastique completed the program. (Performance details).

This is the world premiere performance of “Markings.” Demonstrably the most beloved, critically acclaimed, and decorated film composer of all time, John Williams is a thoroughgoing, well-rounded musician. His broad-based, sixty-plus-year career has also encompassed performance as a pianist and conductor, arranging, television and film scoring, and concert music; he was Conductor of the Boston Pops Orchestra, succeeding Arthur Fiedler, from 1980 to 1993, and has remained an integral part of the BSO/Boston Pops/Tanglewood family since that time. He currently holds the title of Conductor Laureate of the Boston Pops, and conducts the orchestra annually at Tanglewood. This Tanglewood season he appears on the podium for Tanglewood on Parade (August 1) and the annual “John Williams’ Film Night” (August 19).

In parallel with his activity in film and on the conductor’s podium, John Williams has been an active concert-music composer, a pursuit that picked up while he was conductor of the Boston Pops and has held steady for thirty years.

Most of his orchestral and chamber music scores are composed on request from, or as tribute to, particular musicians of his acquaintance. Concertos have naturally figured prominently in his catalog, including several written for members of the Boston Symphony Orchestra—the Tuba Concerto for former BSO tubist Chester Schmitz; an oboe concerto for Keisuke Wakao; a viola concerto for Cathy Basrak (all premiered with the Boston Pops Orchestra); and a harp concerto, On Willows and Birches, for former BSO principal harp Ann Hobson Pilot (premiered with the BSO under James Levine). Williams wrote the violin and orchestra work TreeSong for Gil Shaham, who has also performed and recorded the composer’s Three Pieces from Schindler’s List and his earlier Violin Concerto.

Receiving its premiere this afternoon, Markings is the newest of his concerto-like pieces, written at the request of violinist Anne-Sophie Mutter, who for thirty years has been active in commissioning and premiering new works.

John Williams’s new work is scored for solo violin with harp and strings, an ensemble that recalls Bernstein’s 1954 Serenade (after Plato’s Symposium), which is for solo violin with harp, strings, and percussion. Although the correspondence is coincidental—Williams didn’t have Bernstein’s piece in mind when he wrote Markings—it’s nice to think that both composers hit upon this idea independently, particularly since it was Williams who commissioned the sculpted bronze head of Leonard Bernstein that resides on the first floor of Tanglewood’s Highwood manor house. Williams’s piece contains a certain “American” gestural drama and lyricism in the violin solo part, and an episode of great rhythmic vitality that fits the tradition in which Bernstein worked, but overall Markings is music of very different scope and effect than the Serenade.

Markings opens with the hushed string orchestra creating an atmospheric foundation. The soloist’s opening gesture, marked “reflectively,” is like an intake and release of breath—a rising arpeggio (hinting at the central motif of Berg’s Violin Concerto, a piece significant in Mutter’s repertoire) followed by an accelerating/decelerating gesture mostly on the open G (the lowest string). The soloist’s series of fast, freely articulated arpeggios across the four strings of the violin lead to a glissando up to its highest range. After a pause, a defined but still introspective chordal figure in lower strings underpins a yearning melody for the soloist expanding over four octaves. Increased rhythmic activity in the string accompaniment, with an accelerando, leads to a dancelike episode. The harp is introduced finally as part of the ensemble texture, creating a sparkling aura. The initial alteration between 3/4 and 5/8 meter in this passage adds a destabilizing and energizing element. The solo violin part becomes more aggressive and syncopated, big leaps in register countering short bursts of scales. Following a climactic series of sforzando quadruple stops in tandem with the harp, the solo violin releases tension with rapid rising and falling scales and an unaccompanied, notated cadenza. A coda revisits the lyrical passage and takes us to an introspective close, the solo violin rising into the stratosphere. 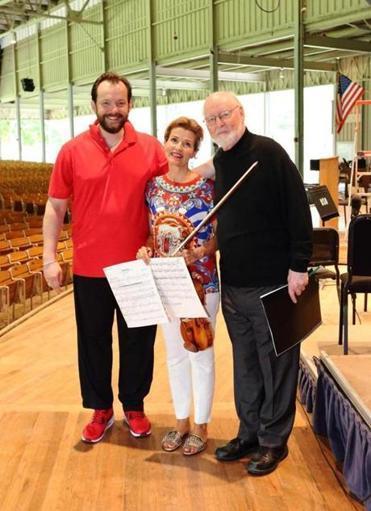