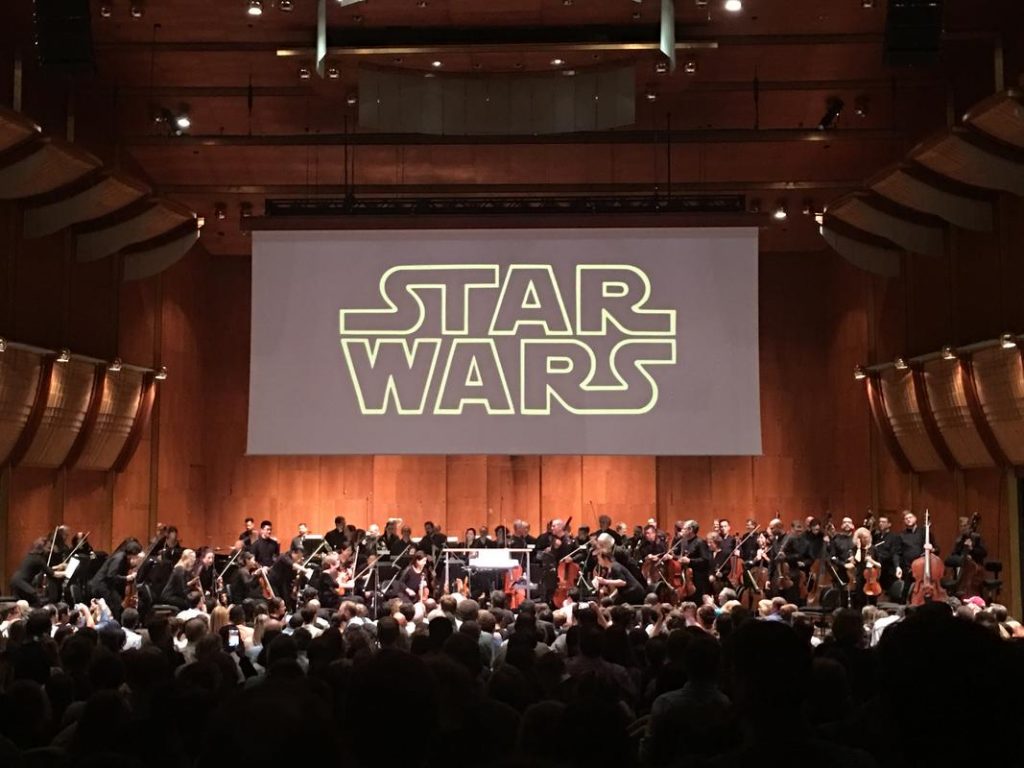 The concert Friday evening was wonderful!

I’m not familiar with the intricate details of the minute differences between all the various versions of Star Wars that have existed post-1997 SE, so to me this seemed like the Blu Ray cut – it featured the full 20th Century Fox logo in the beginning (which the orchestra played, which was great), and the better CGI Jabba as opposed to the first CGI Jabba from ’97.

The intermission was oddly placed, I thought.  It was in the middle of The Death Star cue, as the Millennium Falcon is being pulled into The Death Star.  Basically on the wide shot of the Falcon approaching the screen, it just faded out, and the music kind of faded away (I can’t recall exactly how they handled it).  Upon returning from intermission, they replayed the loud glorious Rebel Fanfare from the cue to a black screen, as the same shot we had already seen of the Falcon being pulled faded in during the music, and the film and cue continued from there.

As far as I could tell, everything they played matched the final cut of the film exactly.  This means Dianoga (“The Water Snake” ) and the music dialed out of The Walls Converge was not restored, and of course the sections trimmed from The Dune Sea Of Tatooine (“Desert Song”) and Chasm Crossfire (“The Swashbucklers”) are still gone.  This also means the 1997 SE alterations had to be recreated, ie the extended “Look Sir, Droids!” scene, and the extended arrival at Mos Eisley.  Honestly, though, when performed live both sections sounded COMPLETELY fine, nothing un-musical about them at all — and hey, we get to hear most of Dianoga this way!  More annoying was the Jabba The Hutt scene, since it was all ROTJ music, and always seems out of place (they did play it perfectly find, though!)

The orchestra played tremendously, and flawlessly from what I could tell!  The strings and brass especially nailed everything throughout the evening, really only the percussion sounded different from the original recordings – and it wasn’t BAD, just DIFFERENT.  Whoever was in control of the cymbals was particularly aggressive, making some really loud crashes happen at times, which was kind of funny!

David Newman didn’t say a word before or after the performance which I thought was a bit odd, though he did return to the stage TWICE after departing after the end credits.  I thought he was going to do an encore of Princess Leia’s Theme or something when he came out a second time!

I’ve seen this film countless times, so everytime the orchestra was playing I found myself watching them exclusively, and only really watched the film in between orchestral cues. Both Cantina Band cues came from the speakers, they were not performed live, which I wasn’t expecting them to be (it would be kinda weird if they did; I noticed this time while watching the film that the second Cantina Band cue actually loops for a long while due to the Greedo scene!)

The audio mix for the evening was perfect, IMO.  Every time the orchestra was playing, it was the loudest part of the mix, which is perfect – it’s why you’re there!  This occasionally meant some dialogue got drowned up completely, which is fine by me! (others might take issue with it).  I did notice after it was pointed out to me that the left and right channels seemed to mostly be not playing – since most of the dialogue and sound effects come from the center channel this was’t a big issue, and I did notice the surround channels were working at some points, there was other points when it was obvious the other channels weren’t doing much.  Again this wasn’t an issue for me, since I’ve seen the film countless times and I’m there for the music – and the music was always mixed PERFECTLY.

Overall a very successful evening, because the score is THAT good; one of my favorites of all time, and a pure pleasure to hear live.  This had to have been the first time the Force Theme has been played for a live audience this many times… forever!  There are too many musical highlights to mention, but really the entire concert is a treat.

Yes, it is indeed a bummer that it’s the SE cut of the film and not the original, but that is truly about the only negative thing I can say about the whole experience.  The music still shines, and even the SE-altered music isn’t an abomination to the experience.

I hope I get the chance to see TESB, ROTJ, and TFA in this setting as well! 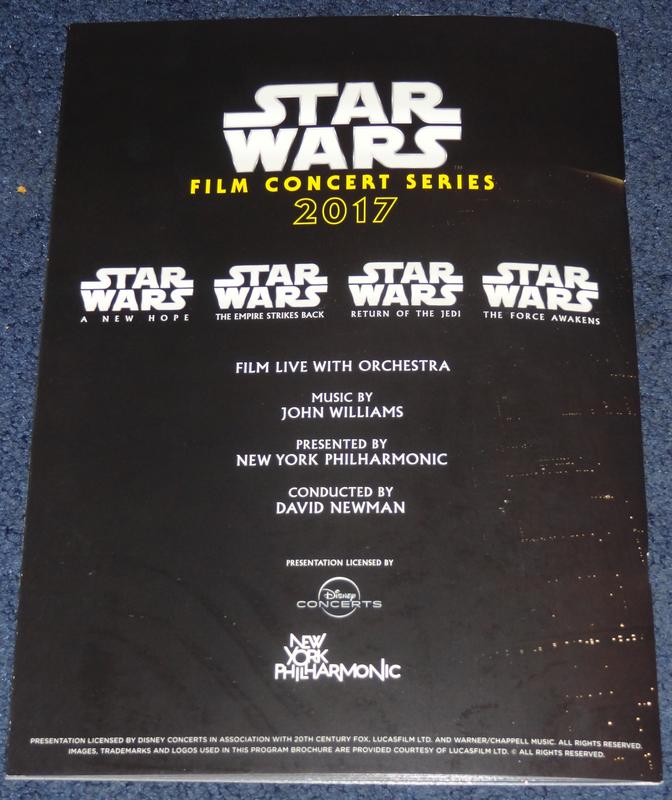