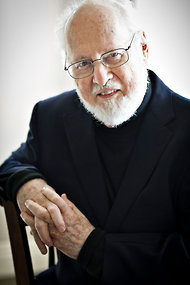 John Williams was born in New York and moved to Los Angeles with his family in 1948. There he attended UCLA, Los Angeles City College, and studied composition privately with Mario Castelnuovo-Tedesco. After service in the Air Force, Mr. Williams returned to New York to attend Juilliard University, where he studied piano with Madame Rosina Lhevinne. While in New York, he also worked as a jazz pianist, both in clubs and on recordings. He then returned to Los Angeles, where he began his career in the film industry, working with such composers as Bernard Herrmann, Alfred Newman, and Franz Waxman. He went on to write music for many television programs in the 1960s, winning four Emmy Awards for his work.

Mr. Williams has composed the music and served as a music director for more than one hundred films, including, War of the Worlds, Star Wars Episode III: Revenge of the Sith, Harry Potter and the Prisoner of Azkaban, The Terminal, Catch Me If You Can, Harry Potter and the Chamber of Secrets, Minority Report, Star Wars Episode II: Attack of the Clones, Harry Potter and the Sorcerer’s Stone, A.I. Artificial Intelligence, The Patriot, Angela’s Ashes, Star Wars Episode 1: The Phantom Menace, Stepmom, Saving Private Ryan, Amistad, Seven Years in Tibet, The Lost World, Rosewood, Sleepers, Nixon, Sabrina, Schindler’s List, Jurassic Park, Home Alone, Home Alone 2, Far and Away, JFK, Hook, Presumed Innocent, Born on the Fourth of July, the Indiana Jones trilogy, The Accidental Tourist, Empire of the Sun, The Witches of Eastwick, E.T. (the Extra-Terrestrial), Superman, Close Encounters of the Third Kind, the Star Wars trilogy, Jaws, and Goodbye, Mr. Chips. He has received forty-five Academy Award nominations, most recently for his scores from Memoirs of a Geisha and Munich, making him the Academy’s most nominated living person. He has been awarded five Oscars, seven British Academy Awards (BAFTA), twenty Grammys, four Golden Globes, four Emmys and numerous gold and platinum records.

Mr. Williams has written many concert pieces, including two symphonies, a cello concerto premiered by Yo-Yo Ma and the Boston Symphony Orchestra at Tanglewood in 1994, concertos for the flute and violin recorded by the London Symphony Orchestra, concertos for the clarinet and tuba, and a trumpet concerto, which was premiered by the Cleveland Orchestra and their principal trumpet Michael Sachs in September 1996. His bassoon concerto, “The Five Sacred Trees”, which was premiered by the New York Philharmonic and principal bassoon player Judith LeClair in 1995, was recorded by Mr. Williams with Ms. LeClair and the London Symphony Orchestra and has recently been released by Sony Classical to critical acclaim. In addition, Mr. Williams has composed the well-known NBC theme “The Mission,” “Liberty Fanfare” composed for the rededication of the Statue of Liberty, “We’re Lookin Good!,” composed for the Special Olympics in celebration of the 1987 International Summer Games, and themes for the 1984, 1988, and 1996 Summer Olympic games and the 2002 Winter Olympic Games.

His concert work “Seven for Luck” for soprano and orchestra, a seven-piece song cycle based on the texts of former U.S. Poet Laureate Rita Dove, was given its world premiere by the Boston Symphony under Mr. Williams with soprano Cynthia Haymon at Tanglewood in 1998. Mr. Williams also composed his “American Journey”, an orchestral work written to commemorate the new Millennium and to accompany the retrospective film The Unfinished Journey directed by Steven Spielberg. The film and music were premiered at the “America’s Millennium” concert in Washington, D.C. on New Year’s Eve 1999. Mr. Williams recently premiered a new concerto for french horn and orchestra, a work that was commissioned by the Chicago Symphony Orchestra for their principal horn Dale Clevenger.

Many of Mr. Williams’ film scores have been released as recordings; the soundtrack album Star Wars has sold more than four million copies, making it one of the most successful non-pop albums in recording history. Mr. Williams’ highly acclaimed series of albums with the Boston Pops Orchestra began in 1980 on the Philips label, for which he recorded Pops In Space, Pops On The March, Aisle Seat, Pops Out Of This World, With A Song In My Heart (a collaboration with soprano Jessye Norman), America, The Dream Goes On (a collection of favorite Americana), Swing, Swing, Swing, Pops In Love, By Request…(featuring music composed by John Williams), Holst’s The Planets, Salute To Hollywood, and an all-Gershwin album entitled Pops By George. In 1990, John Williams and the Boston Pops started making recordings exclusively for the Sony Classical label. To date, these have included Music Of The Night (an album of contemporary and classical show tunes), I Love A Parade (a collection of favorite marches), The Spielberg / Williams Collaboration (featuring John Williams’ music for Steven Spielberg’s films), The Green Album (which includes “This Land Is Your Land,” “Simple Gifts,” and “Theme For Earth Day”), a Christmas album entitled Joy To The World, an album of music by George Gershwin, Cole Porter, Richard Rodgers, and Jerome Kern entitled Unforgettable, a tribute to Frank Sinatra entitled Night And Day, an album featuring music by John Williams and Aaron Copland entitled Music For Stage And Screen, It Don’t Mean A Thing If It Ain’t Got That Swing, with vocalist Nancy Wilson, and Williams on Williams: The Classic Spielberg Scores. Mr. Williams’ most recent recording with the Boston Pops Orchestra is entitled Summon The Heroes, the title track of which was the official theme for the 1996 Summer Olympics in Atlanta.

Mr. Williams has led the Boston Pops Esplanade Orchestra on United States Tours in 1985, 1989, and 1992 and on a tour of Japan in 1987. He led the Boston Pops Orchestra on tours of Japan in 1990 and 1993. In addition to leading the Boston Symphony Orchestra at Symphony Hall and at Tanglewood, Mr. Williams has appeared as guest conductor with a number of major orchestras, including the London Symphony, the Cleveland Orchestra, the Philadelphia Orchestra, the Chicago Symphony, the Pittsburgh Symphony, the Dallas Symphony, the San Francisco Symphony, and the Los Angeles Philharmonic, with which he has appeared many times at the Hollywood Bowl. Mr. Williams holds honorary degrees from twenty-one American universities, including The Juilliard School, Berklee College of Music in Boston, Boston College, Northeastern University, Tufts University, Boston University, the New England Conservatory of Music, the University of Massachusetts at Boston, The Eastman School of Music, the Oberlin Conservatory of Music, and the University of Southern California. Mr. Williams recently served as the Grand Marshal of the 2004 Rose Parade in Pasadena, and was the recipient of a Kennedy Center Honor in December of 2004.