On July 14th at the Dolby Theatre: https://dolbytheatre.com/events/details/grammy_salute_to_music_legends_1   Anne Akiko Meyers, accompanied by the American Youth Orchestra will perform 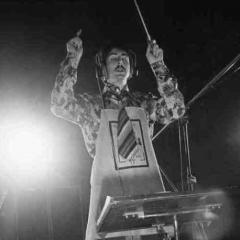 I was lucky enough to attend the Grammy Tribute last night. John Williams attended! He also gave a wonderful speech which paid tribute to the orchestras he has worked with. He was introduced by Gustav