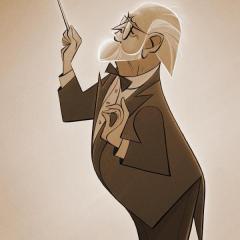 This is the full transcription: I think that, it’s worth a few little words. For me, it means, besides the reaction of joy, proud of being present here, in front of this beautiful orchestra, of t

Wow, another concert arrangement from TFA! That makes 6, right? Incredible just how fruitful that one film has been for suites (Rey, Resistance March, Jedi Steps, Scherzo for X-Wings, Jedi Steps and F