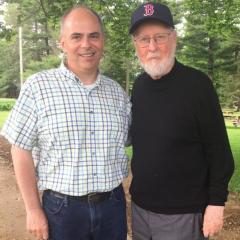 Long-time lurker (since 2006!), first-time poster here.   Keith Lockhart and the Boston Pops orchestra performed the live score to the original Star Wars on August 16, 2019 at Tanglewood in

He probably just wanted to check that he doesn't leave out any themes when he puts all of them in the new score.

Nice, @Tanglehead, and welcome to JWfan. You've taken your first step into a larger world.