The LSO likes my LEGO Johnny: 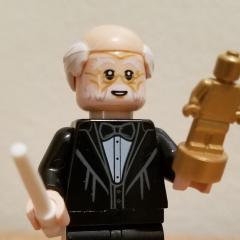 Made a more permanent display stand with the help of a recent acquisition...