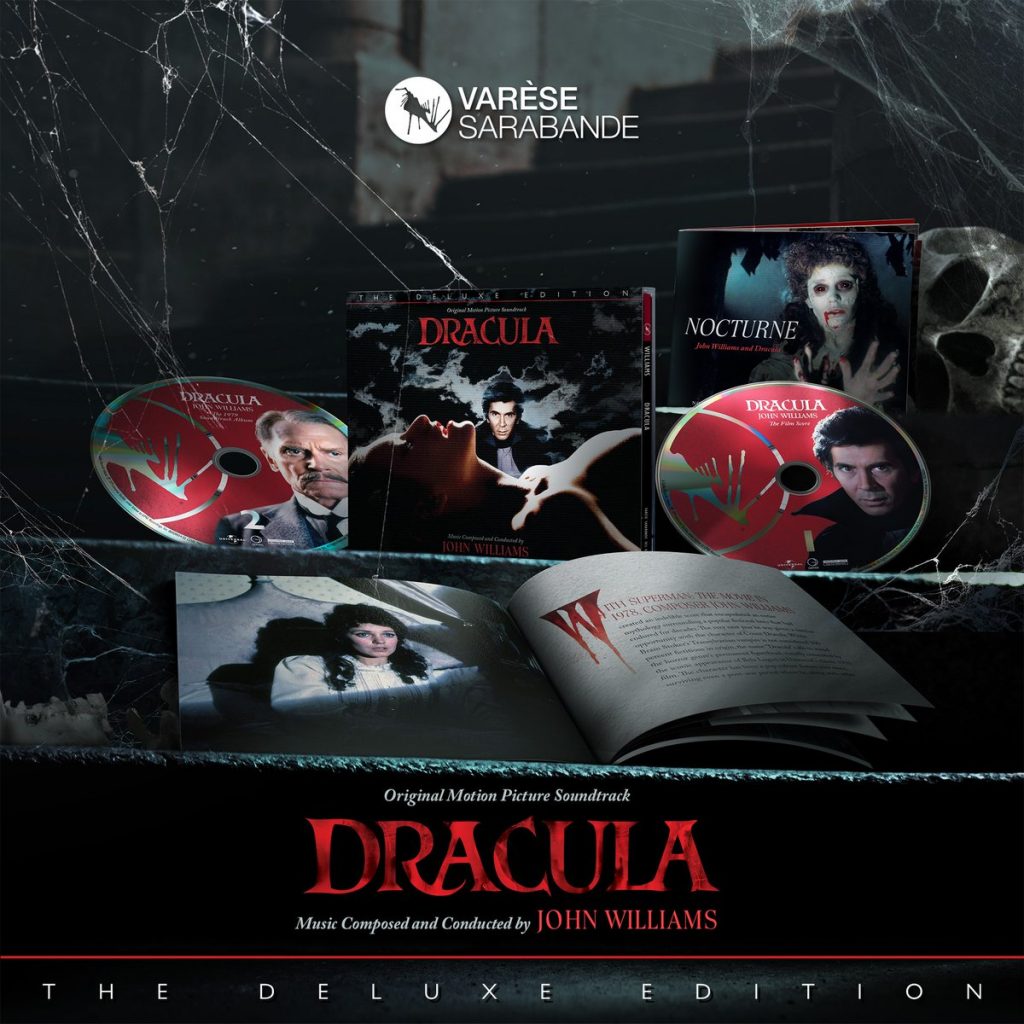 In tandem with The Fury, it is often cited as rare example of Williams doing (operatic) horror (leavened with romance here), and how it’s a shame that he didn’t do it more often. I disagree, as familiarity breeds contempt (The BFG is the most current example of that), and it’s exactly that special status in the maestro’s oeuvre that distinguishes both (instinct probably led him back to some of the characteristic traits in Harry Potter’s darker corners). The best thing about the new Varèse – lavish packaging aside – is the sound: what a relief it is to bid farewell to the awfully pinched sound of the old cd, which now sounds like a proper late 70’s Tomlinson recording – thankfully the new mix leaves that sound well enough alone, only sprucing it up discreetly.

The old MCA release is familiar enough, so on to the stuff previously missing. While there is still a lot of riffing on Dracula’s theme, some interesting things happen with (and beyond) it.

2. Meeting in the Cave 3:32 > Dracula ‘calls’ Mina from a cave after he has been shipwrecked, evocative sequence, same as CD, some orchestral detail heard for the first time here

3. A Quick Change 1:32 > Film version of Dracula getting up from his coffin and attacking Renfield (introducing the curved middle part of the main theme as menacing rhythmic figure), Williams swiftly edited this together with two more cues as ‘Abduction of Lucy’ on the old LP

4. Dracula Appears :56 > Belongs to tail end of ‘Quick Change’ but is interrupted by a cut to Lucy’s party in the film, swirling strings illustrate the arrival of Dracula’s coach, with one of the best examples of dramatic mickey-mousing ever, when the steps fall out the coach and Williams’ hits each with one sinister chord from the orchestra

5. Casting a Spell and The Visitation 4:35 > Mina’s ‘doomed’ theme is introduced when Dracula hypnotizes her, jumping to the long wordless later scene, very well shot, btw, when  Dracula crawls the walls to Mina’s room to finally claim her. Obviously cut, as the cue is even longer here.

6. Give Me Your Loyalty 1:23 > The old opening of ‘Abduction of Lucy’ when Dracula secures Renfield’s services, with a short bustling tail-end for a glimpse of village life, a rare relief from the oppressive mood of the rest.

7. Jonathan Pays a Call 3:05 > Short variation of village life rhythmic figure when Harker goes to visit Dracula’s castle, this is more scene-specific illustration music that could be cut.

9. The Dining Room 1:24 > The main love story begins here, with Kate Nelligan’s Lucy visiting Dracula’s spooky premises for dinner, her entrance into the great candle-lit dining room made into a show piece for product design and Williams presenting some bewitched woodwind variations of Dracula’s theme before the…

11. Dracula Meets Van Helsing 2:44 > Very well-shot scene of Olivier and Langella meeting at Mina’s foggy graveyard site, scoring the count’s mysterious allure with Van Helsing not-yet-able to confront his bête noire, though by now it has been established that we are dealing with an intrusion form the netherworld which Williams pinpoints from the human’s POV with a sly variation on the old Dies irae chant.

12. Grave Trampling and The Asylum 1:14 > More dramatic variation of the Dies irae when a horse pinpoints a grave with an undead, sounds exciting but could be cut as this material is better dramatized in ‘Van Helsing’s solution’ later on

13. Night Journeys (Film Version) 5:20 > The movie’s set piece – it has many but this is Maurice Binder taking over, folks – when Dracula and Lucy finally make love in a montage firestorm of reds and blacks, musically walking in Wagner’s footprints (Liebestod from Tristan and Isolde). Intercut with Van Helsing’s group trying to find vampires underground, the scene shows Dracula entering Lucy’s room and gently taking her. This happens after all elements of the story have been well established, but interestingly Williams scores Dracula’s entrance like a first-time occurence, still kind of spooky but less menacing than Mina’s taking, a clear sign that he intended the scene to be a stand-alone piece. Watch it with the music off, the decision to score it like that is completely arbitrary but it works! When the montage starts there is a heralding brass call magnificently announcing Lucy’s abandon, the ensuing romantic chaos (Dracula’s theme twists and turns like a mad eel after the 03.10 mark) resolving in a thundering Wagnerian resolution of the Dracula theme that surely belongs to the 70’s most boldest scoring choices. Thus, it was replaced with ’26. The Love Scene (Extended Version) 4:40′, though leaving the first part of version 1 intact for the movie – Williams wrote a more sweetly romantic opening (clearly citing Wagner) – and replacing the later half with a more straightforward reading of the main theme.

14. Mina Impaled 1:47 > When the undead Mina is found in the mine shaft underneath the asylum, she dies through her father’s hands in a rather violent scene which Williams scores with cool 70’s staccato piano (the opening of ‘Bat Attack’)

15. Van Helsing Confronts Dracula 3:16 > More of ‘Dracula Meets Van Helsing’, not a terribly important cue on its own

16. Van Helsing’s Solution 3:07 > Elaboration of the Dies Irae material for Mina’s flogging and mayhem at the asylum

17. Into the Crypt 2:20 > More spooky graveyard music, cut from the movie – though it is one of the rare instances that refrains from using Dracula’s theme, it is not terribly necessary

19. The Night Visitor 2:17 > Rising dramatic cue for pre-vampire Lucy trying to seduce Harker, on the old MCA probably by virtue of being one of the few Dracula-less bits

20. Waiting for Dracula 2:32 > Chilly shots of the asylum on the cliffs at dawn with Dracula in wolf-ish form approaching, with a cool watching-and-waiting variation on his theme before…

21. The Capture of Lucy 3:04 > More dramatic urgency after Dracula kills Renfield and breaks through the walls of Lucy’s cell, taking her in his arms through the misty woods to escape with the help of a quintessential Williams brass fanfare playing counter to Dracula’s theme (again!)

22. To Scarborough (Film Version) 2:48 > Another Williams stable, the self-contained scherzo for a coach hunt. This is the MCA version in vastly better sound and a few seconds of overlaid organ chords to punctuate some action shots of Van Helsing and Harker in fast pursuit of Dracula’s coach.

23. Dracula’s Death (Extended Version) 4:04 > More elaborate version of the finale on the ship to Varna, with a middle part cut from the MCA album that includes the killing of Van Helsing. In truth, the cut helps the cue as it goes straight to the chase with the rolling basses after 01:31 finishing Dracula off when he is hauled out into the sun and the score desperately fights with him before a broad rising brass gesture closes the chapter.

24. End Titles 3:32 > No big late 70’s picture could do without: like so many Williams’ses from this period, this coda is the final say on the main theme with its hands-down best reading, first as plaintive oboe solo as Dracula’s coat flaps over the sea, then as full-blown string adagio before quietly dying down on the oboe again.

And thus, this adventure long in the making i finally over. And it seemed worth the wait. If you can’t stand Dracula’s theme, this release still isn’t for you…