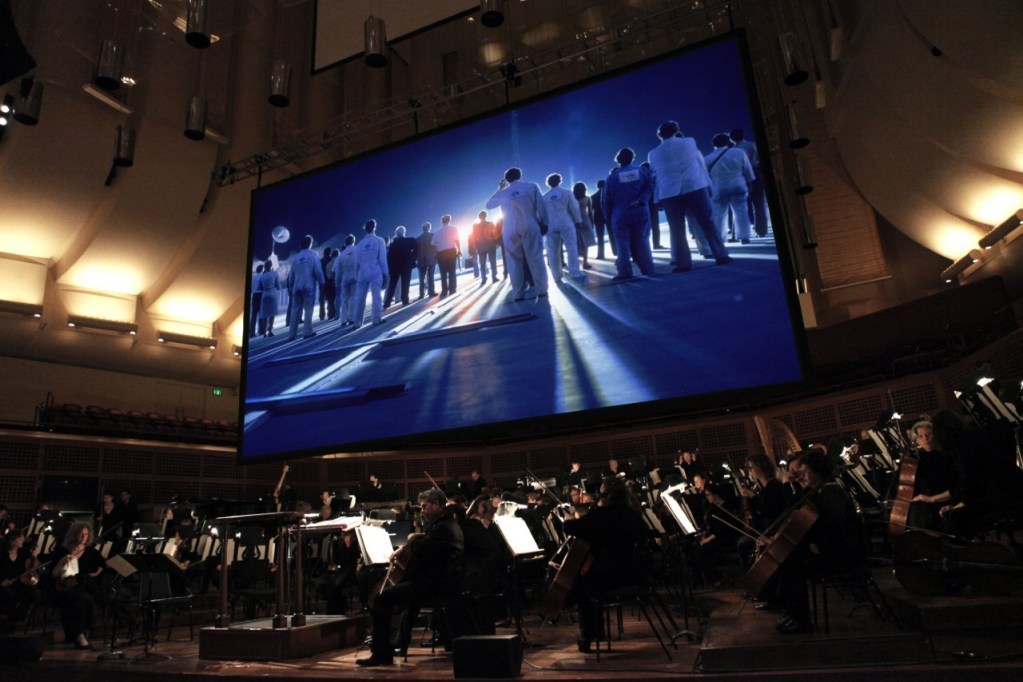 For the opening credits sequence, the audience were on their best behavior in their not applauding at any of the names in the credits. Spielberg was wise in not putting Williams’ name in the opening credits because I know that the audience would have given big cheers for the maestro.  Any applause, however well meaning they are, would have destroyed the ominous, building mood that the music was creating for that sequence.

The sudden transition from pitch black to brightness:

The entire Trucking cue has been performed on stage, but in 2 parts.  As ‘Disco Stu’ demonstrated in this video.

The first part does begin where the headlights, shining in the back of Neary’s pick-up truck, move upward, however the music ends at this video’s 48 second-mark where Neary sees the swaying mailboxes.  The remaining was used for the entr’acte as we’ve seen.

There was no chorus singing the “EEEE”s during any of the scout ship flyovers.

For the Chasing UFOs cue–the footage where Neary and the police cruisers are chasing the scout ships—there was a bass drum playing over the urgent brass and frantic strings.  At first, I thought Williams added that extra percussion for the concert but when I heard the cue on the CD, that instrument’s sound was mixed very low beneath the brass and strings, so, you could barely hear it.  We also heard the ending part of that cue with that sustained major string chord as the lights and power where being returned to the town.

I don’t mind people coughing during a concert.  It’s intermitted and normal.  However, during the final minutes of the concert—especially over the credits—there was this one guy coughing repeatedly. I’m thinking, “Dude, if you know that you have this intense cough, maybe you should have not gone to the show.”  It almost ruined the evening.  Maybe the next performance of CE3K in Cleveland this month will make up for it.

Close Encounters of the Third Kind in Concert – Upcoming Shows

← ‘Super Orchestra: the LSO and the Music of Superman’ – New Article at The Legacy of John Williams
Conductor Dirk Brossé Talks John Williams →