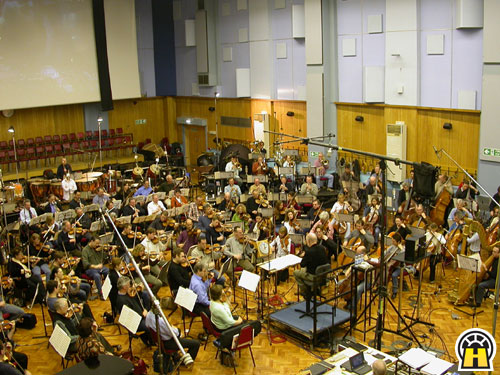 – “Padme’s Visit”- Unnumbered but report implies it’s from the latter part of the film. Dark and moody for a “tense encounter” between Anakin and Padme. Love Theme and Imperial March appear.

– Untitled and unnumbered- Scores the Dooku/Anakin duel at the start of the film. Non-thematic, heavily percussive. Possibly reminicent of “Duel with Dooku” from Ep. II. A tipani roll signals the end, followed by quiet “tentative” strings.

– “Palpatine’s Seduction”- Unnumbered. Anakin and Palpatine talk in the Chancellor’s Office. Very low. Perhaps a statement of Shmi’s Theme, and an instrumental statement of the Emperor’s Theme. Ends with a cymbal roll for a scene transition.

– “Heroes Collide”- Unnumbered. Scores the start of the Big Duel. “Sweeping strokes and fast punctuation”, with heavy percussion again. The cue plays through transitions between this and another fight happening elsewhere. The new theme appears in this cue. Has a quote of the cue in ESB where Vader Force-throws various things at Luke. Also features a strained statement of the Force Theme. No DotF, yet.

– “Another Happy Landing”- Unnumbered, takes place immediately after the film-opening Battle of Coruscant. Peaceful and reminicent of Arrival at Coruscant from TPM.

– “Yoda’s Fall”- Unnumbered. Less than a minute long and underscores “a specific action”. Presumably from late in the film.

– “Revisiting Padme”- Unnumbered, but seems to be from the first part of the film. Statement of the Love Theme, with “an undercurrent of dark uncertainty”. Ends in a woodwind crecendo for a transition.

– Concert piece of new theme, tentatively called “Revenge of the Sith”. A nine-note theme, and apparently very whistleable like all great Williams themes.

– “Revenge of the Sith”- 6M9- Underscores at least part of the Big Duel, the new theme is heavily featured. More heavy percussion, and will have a choral element to be recorded later. Statements of the Force Theme, and a crecendo of drums that suddenly cut out for a “shocking event”.

– “Good-bye Old Friend”- Unnumbered. Obi-Wan leaves his assault ship and departs in his fighter. Heavy and militaristic, and reminicent of the start of “Belly of the Steel Beast” from Last Crusade. A huge statement of the Force Theme as Obi-Wan docks his fighter o­nto a hyperspace ring and departs. There’s also a section that’s “dark and surreal” with dangerous percussion that scores another Anakin/Padme conversation.

– Unnamed. Something from Reel 7, including something that horn player David has been waiting 25 years to play. Possibly includes a statement of Leia’s Theme (the article is unclear as to if that’s here or in another cue).

All major spoilers from the report have been invisotexed.

-“Lament”- 5M3. “The most intense expression of feeling…Thickly textured, and wildly passionate…it was beautiful.” The cue accompanies a tragic montage of worlds, and the choral passage is similar to those from Return of the Jedi.

-“The Birth of the Twins”- 7M3. The o­nly music mentioned was (big spoilers, highlight to read): “As babies are handed to people, in another location ‘the helmet’ descends o­nto Anakin’s broken face, to just o­ne chord (minor of course) which builds from p to a deafening fff and back down again.” There is a soft statement of Luke’s Theme when he is born, followed by the Force Theme. Tears reportedly flowed when this cue was played.

– (mega spoilers) “The Death of Padme”- 7M4. Includes a reprise of a choral track from a previous score. This is probably the reprise of Qui-Gon’s funeral music, and includes a soft Imperal March statement.

– At least part the Battle of Coruscant, actual number of cues unknown.- Unnumbered, but this is the start of the film. The cue heard is described as a cross between The Battle of Hoth and The Battle of Yavin and gets a “Cool!” from Lucas. Includes statements of the Battle Droid March and the Rebel Fanfare. Described as “pure fun” in the Hyperspace report.

– Title unknown, a conversation between Palpatine and Anakin- Unnumbered. Contains a solo for three cellos.

– Title unknown, 6M7. The heart of the Big Duel. Music focuses totally o­n the characters rather than the active location around them. There is a “dramatic upswell” as loose lava heads their way. Not much more info o­n the music. According to Williams’ comment from Day o­ne it might be safe to assume that this is where Duel of the Fates appears, although the report doesn’t mention it.

– Untitled in the report, but probably “Fighting with Grievous”, which is 4M4A according to the cue sheet pic from Day o­ne. Very energetic, so much so Williams got lost during the run-through! At least part is like a more up-tempo version of the Imperial Walker piano music from The Battle of Hoth.

– No report of the afternoon session.

– “End Credits”, 7M8. A full new End Credits suite, featuring the classic Luke’s Theme/Rebel Fanfare start, then a gliding harp starts off Leia’s Theme. This segues into the new “Revenge of the Sith” theme, followed by a concert presentation of the Throne Room motif from ANH, and a reprise of Leia’s Theme as the now-traditional prequel soft fadeout. Described as highly emotional with some tears flowing during recording.

– “Scenes and Dreams”. Over six minutes long. Starts off sweet with Anakin and Padme sharing a rare moment of peace and bliss. There’s a statement of the Love Theme, with no undercurrent of darkness or tension this time. A sudden change to shrill strings as Anakin has a nightmare. There is a statement of Anakin’s Theme from Ep. I, with “a fragile tinkle of bells,” as we see that Padme wears the japor snippet as a necklace. The cue takes a “moody” tone as Anakin describes his fears. The “somber tones” continue as Anakin and Yoda discuss the vision, including a Force theme statement. A brass transition ends the cue.

– “Moving Things Along”. Also over six minutes. Mostly non-thematic with transition and establishment flourishes. Mustafar, the lava planet, is seen for the first time, introduced with “a bellicose, percussive passage with blasts of hard brass.” The music turns atmospheric as we see Darth Sidious conferring via hologram, including statements of the Imperial March and Emperor’s Theme as Palpatine formally declares a New Order.