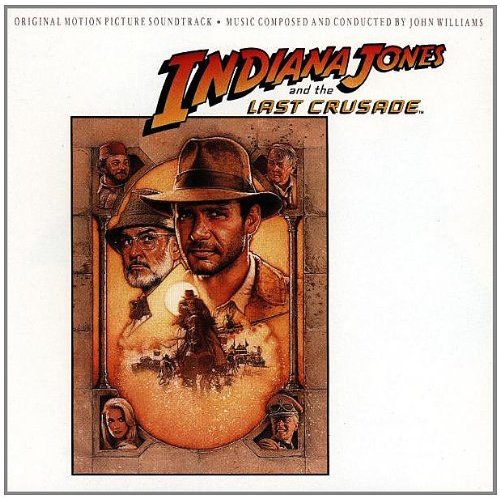 Indy, desperately grasping onto the whip that is keeping Henry Jones from becoming crushed meat via one big tank, is being stabbed by the Nazi General Volgel Oberst. Pain drips down his face. If only he could let go of the whip, so he could use both hands to stop Vogel. And then, in the distance he sees a man on a horse. He reconizes it to be Sallah. “Sallah, get dad!” Indy yells at the top of his lungs. And sure enough Sallah rescues Indy’s father, giving Indy the freedom to kill Vogel. This is just one of the spine tinglinglingily masterfully scored scenes in The Last Crusade. Of all the three Jones movies, this one is my favorite movie, and my favorite score. I must say that this is my favorite score of his, period. The music is a little more lighthearted and uplifting than the other two, with some very peaceful themes, but that is certanly not to say that it isn’t cruel, violent and exciting at times. Perhaps the best way to describe the way this music is with the “Sherzo for Motorcycle and Orchestra”. This is a brilliant and original sherzo that keeps you on the edge of your seat, while at the same time, giving you great enjoyment at listening to it. This truly is a fun score to listen to. The first track may seem to be mysterious and dark at the begining, but it immediatly gives into a light hearted chase that seems to roll along with the train that it is scoring. Williams certainly composes a ton of themes for this movie. There’s Indy’s theme (which is actually not played that often), a soft and comforting Henry Jones theme, the malicious and evil Nazi motif, the brilliant sherzo, and a beautiful mysterious Grail Knight Theme. These, when combined with some fast paced action music (like “Escape From Venice”) and light hearted music (like “Keeping up With The Joneses”) combine to produce a pure masterpiece. My favorite track on this CD actually has none of those themes, except for a brief redition of Indy’s. It is “The Belly Of the Steel Beast”. This track really can’t be described, it has to be experienced. It is worth spending the money for the entire CD for. But, that is enough of the good points, now…Onto the bad.

I have a rather large problem with the CD itself. There is nothing wrong with the music, which I hope I expressed clearly above. It’s whats NOT on the CD that bothers me. There is so much music missing from this CD that it boggles the mind. And this is a relatively long CD, compared to The Temple of Doom. Maybe I feel so bad that there isn’t enough music is because the missing music is SO good. I’ve watched the video time after time, just listening to the missing music, and feeling so sad that I don’t have it on the cd. The Nazi theme is only played two different times on the cd, yet it is in the movie 7+ times! The music that I feel the most glum about is the missing “Belly of The Steel Beast” music. The second Indy sticks the rock into the tank gun turret, superb music starts that doesn’t end until Henry blows up the Nazi war car. Other great missing sequences include a HUGE sequence in the begining chronocling Indy’s Cross of Coronado trek, some Venice dungeon music that features the Ark of the Covenant’s theme, a short piece while we see the car going to Castle Brunwald, all of the interior Brunwald music, when Elsa says “Goodbye” in Austrian, “The floor’s on fire!” music, The Nazi March (not by Williams), post Tank battle music, and the true “Penitent Man Will Pass” scene music. All in all, even with its great flaws, the music from The Last Crusade is so good, it not only compensates for the loss, it actually gains this score a higher than ten rating. I give Indiana Jones and the Last Crusade a whooping ten (yeah, I lowered it from an eleven— don’t ask ).

Did you know that track 8, “Keeping up With The Joneses” does not appear in the film. But, two segments from this score do appear in the movie. First, after the book burning scene, at the airport, we se Henry Jones reading a newspaper that is concealing his face. The music that is playing at the time is The Keeping up With The Joneses theme, which is played rather softly on the woodwinds. Later, at the beach scene, we see the Joneses running down to the beach. We hear a very short sequence that occurs on the track right before the music in the airport does!