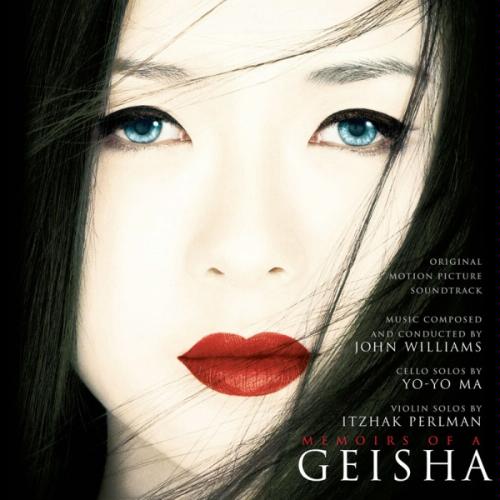 Memoirs of a Geisha is one of Williams’ more recent master works. It displays very mature writing from Williams being less hummable and more introspective than most of his blockbuster scores. From what I gather from the interviews Williams studied more the Japanese instruments than he did the Japanese music for this score, how would these instruments enhance and blend with the Western orchestra, give a certain ethnic colouring but not dominate it. There is a lot of atmosphere and ethnical colouring on the soundtrack to emphasize the locale, time and place but to make it accessible to the audiences it is presented in Western orchestral idiom with the cello taking center stage.

Williams was impressed with the book and immediately thought of cello to portray the character of Sayuri, of course not knowing that he would be scoring the film at any point. He knew that Spielberg had acquired the rights to the novel so there was an inkling of it being made into a film. Williams also thought of Yo-Yo Ma from the beginning, actually sending the book to him and talking to him about the possibility of scoring the film and the idea of cello. And later when the film was announced Williams did what by his own words he has done never before: He actively sought to score the film, asked for the assignment. This certainly shows how inspired and impressed Williams was by the story.

The movie is very colourful and theatrical portrayal of Japanese culture, more an illusion than real. In other words it is pure Hollywood. The music has a large role in it, almost another character in the storytelling, an integral part of the drama. The film has several of what could be called musical numbers, Becoming a Geisha being the most prominent, so the music is allowed to shine throughout the film.
But Williams’ music even though it has a large part in the film, is not bombastic or overly lush. I think more than anything it is introspective and subtle, lyrical and delicate with a lot of underlying subtext both psychological and poetic.
Most of all it is a portrayal of a society and culture. Hence it is restrained and subtle. I can’t say to be an expert on Japanese culture and customs but I know that they are a reserved people and put a lot of emphasis on public appearance and honor. Public outbursts of big emotions is not part of their culture. I think the music follows this idea throughout. There is emotion in it but it is mostly not in Hollywood proportions. You have to read it more carefully. Often the emotion is tied to the instrumental solos, carrying all the unsaid and unexpressed in their timbre and voice. Only at the end of the movie the music blooms into larger than life emotion on the track Confluence where both of Sayuri’s themes are performed in a grand manner offering an emotional closure as Sayuri and the Chairman are finally reunited, finally expressing their true feelings openly.

Williams had as a starting point the cello as the voice of Sayuri’s character. Cello that has a soulful and warm sound is indeed ideal to portray this young woman’s journey through life and Yo-Yo Ma’s expertise and artistry brings her alive in music in a way I do not think would have been possible with any other artist. The counterpoint to Sayuri’s cello is the violin played to perfection by Itzhak Perlman that portrays the character of the Chairman. Both artists elevate the music with their playing immensely. These are really the two main components of the score. Oboe could be added to this instrumental group as it has a prominent role in the music as well being a lyrical and ruminating, showing perhaps Williams’ attempt to capture some of those qualities he sees in Japanese culture.

Thematically as instrumentally the music is built on Sayuri’s theme and Chairman’s theme. Sayuri has 2 different themes associated with her: Chiyo’s theme, the musical identification of the young girl before she becomes a geisha, that could be called the real Sayuri’s theme, depiction of the real person under the guise of the geisha (Journey to the Hanamachi 2;41-3;13, Confluence and finally A Dream Discarded which is a sort of deconstruction of the theme on cello. End Credits contains subtle interpolation of this theme in flute and chimes 1;36-1;53). And then there is the more prominent Sayuri’s theme, the actual musical depiction of the geisha that can be heard throughout the soundtrack. Both themes are lyrical, Chiyo’s music showing more fragile image of a young girl than Sayuri’s theme that is elegant and mature but no less soulful. Cello is omnipresent in scenes involving Sayuri and many tracks containing cello solos involve her and inform us of her state of mind with beautiful and lyrical solo lines.

The Chairman’s Waltz is heavily European, even Slavonic in its style and contains a clear melodic line with very little decorative violin work that it might have gotten if not for the character’s nature. The Chairman is reserved and nearly paternal at first in his encounters with Chiyo so the music is reserved, elegant, cultured, hinting of Western civilization as if to show how the Japanese of that day and age might have admired the European culture. It could be seen to depict Chiyo’s idolized view of the Chairman as a citizen of the world, sophisticated and cultured. And as the music is strongly melancholic, described by Williams as valse triste, it could also hint at Chiyo’s sadness for noticing how the Chairman does not return her affection (even if that is not the truth but this man does not show it publicly). Williams transforms this theme into an introspective elegy for solo oboe, harp and two celli in As the Water… where the waltz time is kept by the pizzicato celli and after the oboe solo the duo plays a deconstructed version of the waltz. This music marks both the passage of time in the film as well as Sayuri’s sorrow of being separated from the Chairman.

These two character portrayals are accompanied by different musical devices and shorter motifs that are associated with fate and destiny referenced clearly in the film. They take their inspiration from water, also a prominent symbol in the film, a river, flow of destiny and the current of fate. There is a constant forward momentum in the music depicting the irrevocable flow of both time and fate of Sayuri/Chiyo or they are used in important moments in the story to note the changes of fate. This idea of water or flow of water/destiny can be heard in the music throughout from the swaying strings accompanying Sayuri’s theme to the End Credits.

Most prominent of these motifs is heard on the track Chiyo’s Prayer 0;32-> in the accompanying strings, 3;03-> on solo cello, Finding Satsu 2;31-2;52 and Fire Scene and the Coming of War 4;31-> accompanying the Chairman’s theme. There is the constant up and down motion, like a current that is carrying the main character forward, usually played by strings.

Another motif associated with fate appears in Finding Satsu 0;05-0;40, and again in A New Name…A New Life 0;10-0;34 in a fuller guise and again at the end of the track 2;31-2;54. Even the Rooftops of Hanamachi contains a subtle quote of this motif as Sayuri tries to escape over the rooftops and her destiny is in danger (small portion of the motif is quoted 3;03-3;15).

More of a self contained continuation of this water/destiny idea is the Destiny’s Path track with the constant motion in the music without major thematic material.

Williams also composed a good amount of set piece material for different scenes that enhances more the mood and ethnic flavour than adds to the thematic palette. Going to School, Brush On Silk, Dr. Crab’s Prize, Rooftops of Hanamachi all add more authentic Japanese instruments to the orchestral palette and enhance the mood of the scenes. They add colour and variety to the music and give it a more Japanese flavour. E.g. Becoming a Geisha contains between the developments of Sayuri’s theme a percussive interlude that not only adds ethnic flavour but in Williams’ own words denotes almost a some sort of sacrifice taking place, the young girl being transformed into a geisha, losing her former life and identity in the process.

This is a score you have to pay close attention to. You have to find the emotional core of this score from the soloist performances which are at center of this music rather than from bold and big performances of the themes which are well integrated but certainly more restrained than in many Williams scores. It is an introspective score but it is also an extremely beautiful score worth the time you invest in it.