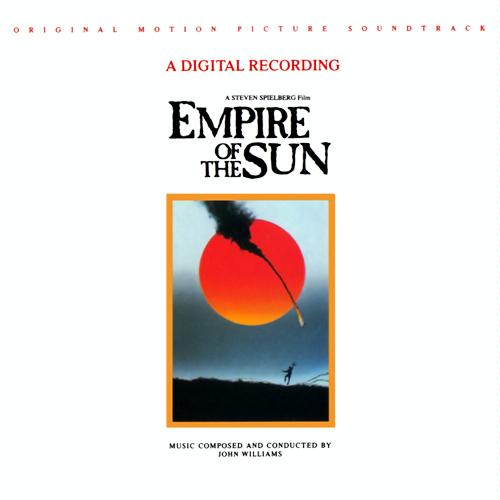 Marking the ninth movie that Steven Spielberg and John Williams collaborated on, Empire of the Sun is the second “not action” movie directed by Spielberg. His first serious movie was E.T., where he branched from his normal running from sharks and blowing up Nazis type movies to a more emotional genre; thus, Empire of the Sun has a mature and adult score. Many of its works are more quiet and reflective than those in Raiders, or even E.T. at times, and at times, the music is dismal and unendingly fierce. If you want some Williams music that is different than the rest, get the Empire of the Sun!

The plot in Empire of the Sun revolves around a young English boy, Jamie, or Jim, as he is later referred to in the movie, who is living in China during the Second World War. Jamie is separated from his parents in a terrifying and frantic scene and is left to fend for himself on the streets of Shanghai. Later, Jamie befriends two Americans, Basie and Frank. Together, these three friends are sent to a prison camp and held by the Japanese. The movie is mainly about Jamie’s revelations during these months.

The movie isn’t nearly as good as Schindler’s List, yet to come, but still is very dramatic at times, as is the music. The first work on the CD is “Suo Gan”. Sung beautifully by the Ambrosian Junior Choir, “Suo Gan” is a traditional Welsh lullaby, not composed by Williams. The song is rather well known, and is very beautiful in its own right. The soloist, James Rainbird is excellent. The further the film progresses, we learn about Jamie’s love of fighter planes. I am not absolutely sure, since I have only seen the movie twice, but I think that there are some variations of the main theme played as Jamie imagines about these majestic vessels.

The main theme is truly magnificent. It starts out with a few familiar notes, recognizable from the Over the Moon theme from E.T., and branch out into a beautiful and simple composition. In many ways, it is similar to the statement of the Jurassic Park theme during the “Welcome to Jurassic Park.” Later, at a dinner party, Jamie discovers a fallen war plane in the middle of a field. This scene is accompanied by the “Imaginary Air Battle”, a light and invigorating piece with a few flourishes of the main theme, as well as some beautiful choral work. But just as it is beginning to seem that Jamie has the ideal life of a rich boy living in a mansion full of servants, the unthinkable happens. In one of the most nervous, anxious and terrifying scene ever written, Jamie is separated from both of his parents in a panicking mob of frightened Chinese citizens fleeing from the Japanese, first his father, then his mother. And he is left stranded in the center of the crowd, calling pitiful and useless wails for his mom. The music accompanying the scene, on “Lost in the Crowd”, is just as dramatic and frightful as the scene. Without any theme or recognizable motifs, save a Jaws like repeating of two notes, Williams lets loose on the orchestra creating a shocking and scary piece of music. As the fear and excitement hightens, so does the music, until you are completely engulfed into the terror sweeping through the very music. As the scene progresses and Jamie is left alone, atonal and low piano and brass create a clashing and sweaty sort of experience, complete with a rolling cymbal throughout the entire section. This is one scene that is hightend tenfold by the music going along with it.

Next comes “The Streets of Shanghai”. As Jamie explores the mysterious paths and roads he never knew in Shanghai, ambiguous choral music help him feel the distress and amazement he feels at the same time. Soon after though, the music turns to a mad frenzy, as Jamie is caught up in an exciting run for what he thinks is his life from a local citizen. Fast paced and pounding, several points in the music resemble parts of “Eye to Eye” and “Visitor in San Diego” from both the Jurassic Parks. Finally, the music calms down, still retaining its pacing feel, with a statement of oriental style music at the very end.

The music in the movie continues to follow Jamie to the camp, where he has a better time than he first suspected. He has a host of new friends, and is accepted into the American’s bunks. Jamie, or Jim as he is now called, is a very witty boy, and this is demonstrated in “Jim’s New Life”, a frolicking little scherzo that is practically the only piece on the CD that is both upbeat and quick. It is a joy to listen to.

The music comes to some of its emotional peaks as the next series of tracks begin. In chronological order of the movie, first come “The Pheasant Hunt”, I think. The Hunt is a remarkable composition by Williams, because he composes it for nearly all percussion. Many ethnic and exotic instruments are used also. As the music progresses, it becomes more and more tense, but it never gives up its sense of flowing, unlike “Lost in the Crowd”, which is just a panicky and jumping piece.

Then comes “The British Grenadiers”, which is not written by Williams. In a short, march style rhythm a solo piccolo plays its part, later joined by the entire orchestra. The piece ends in a sentimental little part played by the piano, after a short pause on the track. It is a perfect introduction to the next track, “Toy Planes, Home And Hearth”. The first part of the work is completely centered around the beautiful main theme. Quiet and reflective various parts of the symphony create one of the most beautiful works of art ever with the booming choir joining in at one point. The music begins to wane, and moves on to the second section on the track, an adapted version of Chopin’s Mazurka #4. Played wonderfully on the piano with flourishes from the winds now and then, the Mazurka is warm and comforting. The composition couldn’t fit its title better.

Next comes “Cadillac of the Skies”. After starting off quick and loud, the chorus takes over as Jim looks at a huge American “Cadillac of the Sky” swoop right past him, pilot waving to him as he bombs the camp. Jim, who is acting rather odd for a boy witnessing a huge bombing is entranced and amazed by the plane, and you can tell in the movie. Soon, the doctor that has been teaching Jim comes up to the roof where Jim is gazing at the plane and tries to slap some sense into the young child. Jamie just keeps on raving about how he wants to be a Kamikaze pilot until he realizes that he cannot even remember what his parents look like. The music now is sad and quiet, almost crazy in a way until it becomes completely sorrowful, as Jamie begins to chant some Latin to the doctor. Soon after the bombing, the camp is let free. Unfortunately, all the hundreds of prisoners are forced to walk to the city. In one of the most painful compositions I have ever heard, a lone oboe calls out the mournful procession, with low strings playing the marching textured accompaniment on “The Return to the City”. More winds and horns begin to bring fourth the suffering. Even the chorus is revived to help the scene and all of its pain. The procession continues until the mass discovers a huge garden full of cars, books, furniture and all sorts of memorabilia. Jamie finds his old car among the lot, and more saddening music continues. As a woman begins to play a piano found in the garden, we hear a quiet and atmospheric piano piece by a composer I am not familiar with. Williams adds quiet and foreboding strings throughout the piece to demonstrate the mystery in the scene. Soon after, really strange music begins to play. Some type of panpipes or similar instrument play exotic music accompanying a scene with a woman who seems to be dying, I think.

Next to come in the movie is “No Road Home/Seeing the Bomb”. For the first part, much of the pain is brought back from the Return to the City to dictate exactly what the title suggests. The chorus sings mysterious and endlessly somber music, until it begins to get a bit brighter. The music struggles to achieve it, and at times, it seems that the pain will not stop, but finally, the full majesty and joy of the orchestra is released when Jamie sees the bomb. Why would Jamie be happy to see a bomb? Because he thinks the white light is the dying woman’s soul going up to heaven. The music is a fantastic rendition of the main theme, which ends more reflective than it started, with the Chorus chanting some extraordinarily mystifying and beautiful music, which almost seems sad, but in the way that you feel that you are crying for joy. Actually, I believe that the music from the second portion of the track actually accompanies the scene when Jamie discovers food dropped by the American army, but it isn’t that relevant to the music. After Jamie finds the food, the soldiers rescue Jamie, who is found riding a bike for joy throughout the old base. The music that highlights this scene is one of the best highlights of the score. It is found on the track entitled “Liberation: Exsultate Justi”. The full, uncut version of this piece can be found on its reprise on the last track, “Exsultate Justi”. Exsultate Justi is a truly unique work written by Williams. A full choir sings out a traditional Latin text adapted brilliantly by Williams. Words cannot describe this piece, as is the case with much of Williams’ material. The full English translation of Exsultate Justi can be found below:

Laudamus te, laudamus !
We praise you, we give praise !

Exsultate in Domino.
Exult in the Lord.

rectos decet collaudatio.
praise from the upright is fitting.

Qui tollis peccata mundi.
You who take away the sins of the world.

Cantate ei canticum novum,
Sing to him a new song,

Overall, Empire of the Sun is one of Williams’ most beautiful works, and it has very few flaws. Its type of music will not appeal to everyone, which keeps it from getting a full ten points, but clearly, if you are a fan of incredible dramatic and emotional music, Empire of the Sun is for you!