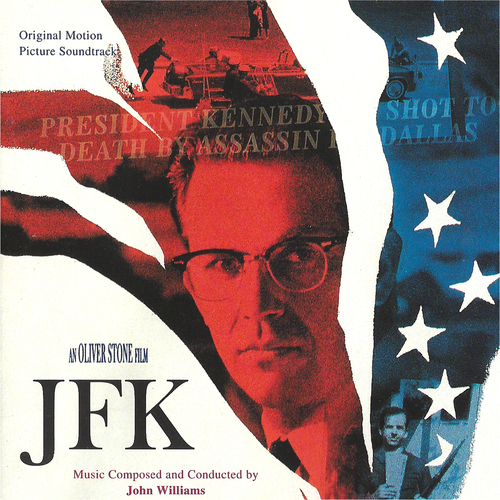 Anyone who has seen Oliver Stone’s requiem to President Kennedy knows that this film is not one that would require a normal composer to just write a simple theme for strings and develop it throughout the film. Because of Stone’s use of blurry cinematography and quick editing cuts (both of which were honored with Oscars), the accompanying music also has to be frenzied and out of synch. Leave it to John Williams to compose such a piece. Of course there is a wonderful flowing main theme which is interspersed throughout the score album, but other than that there is not much unity to this score, and that’s a good thing. But Williams manages to take all of these pieces and make them whole, tying together everything at the end and giving the film resolution.

Only 11 of the 18 tracks on the CD are Williams’ compositions, and after listening to the score and watching the film a few times, I found that the tracks are out of order, which irritates me to no end (but that’s why there is a program feature on CD players).

My favorite tracks on this CD are “The Motorcade” (track two), which underscores Garrison’s interpretation of the assassination and is the score’s most frenetic cue; “Garrison’s Obsession” (track six), which is good because the mood turns dark as Garrison gets deeper into the conspiracy (the double piano hits underscore the attempt on his life at the airport, geniously crafted music); and “Arlington” (track 16), which gives the film a more dignified and noble feel, and also serves, with the main theme as a sort of requiem for the slain president and the people involved.

Of course Williams has done better scores, but in terms of being so in synch with the feel of the film, I don’t think he has done much better.

JFK is one one of the most original and serious compositions of composer John Williams career from the early 1990’s. It marks Williams’ 2nd collaboration with veteran director Oliver Stone (Their previous collaboration was on Born on the Fourth of July which earned Williams an Oscar nod). So their second collaboration focusing on the conspiracy behind the Assassination of American President JFK on 22nd November 1963 was a grand challenge for both.

Williams’ primary theme for JFK in “The Prologue” is an extremely moving dramatic piece played wonderfully on Trumpet by Tim Morrison and it captures the heraldic nostalgia of JFK’s camelot and it’s tragedy. It’s no surprise that Oliver Stone actually took Williams to the infamous Dealey Plaza (from where the supposedly fatal shots were fired by Lee Harvey Oswald) for Williams to get the feel of the tragic scene. Williams later confided that he had for the first time in his adult life wept on JFK’s death. Perhaps this is how everyone did feel in that period and William’s emotional input in the “JFK theme” is indeed a nostalgic reminder of that era.

“The Motorcade” is the big action sequence which underscores the grim assassination scene (as narrated by Kevin’s Costner’s Jim Garrison’s character). The music is extremely suspenseful and tense, punctuated by a atonally developed brass motif that alternates into the higher registers as the music ascends into tension. The middle is layered with snare drums and piano rumblings which build to a frenetic frenzy of chaos and confusion. You can almost feel the jolt when the fatal shots are fired as the brass and percussion explode four times. The orchestra and brass seize. The orchestra growls behind in dissonance and snares echo the state of confusion and shock. Its one of the most operatic cues Williams has ever penned. The whole sequence almost takes a perspective as if Lee Harvey Oswald is watching and taking aim from Dealey’s Plaza. Perhaps, that’s why Stone took Williams to capture the tone of the scene and needless to say it pays off tremendously. “Garrison’s Obsession” and “The Death of David Ferrie” also exemplify Williams structuring of the score to Oliver Stone’s documentary styled narrative. The former is another tense brassy affair which caters to the violence of the era and the latter has a mystifying yet eerie infusion of synthesized chorus and percussion. It’s very dark and dreary sounding and extremely effective.

But, the grand highlight of the score is track titled “The Conspirators”. Williams’ composition is a staccato percussive piece which almost acts as a impressive allusion to the JFK conspiracy. A masterpiece of composition, it is supported by an acoustic arrangement of the orchestra and synthesizer in rhythmic variation. It may be possible that this cue alone may have alone prompted the Academy to have Williams get an Oscar nomination, for this very cue was indeed performed as a ballet during the Oscar ceremonies. Its no surprise that this cue has been endlessly copied by others including Williams in Jurassic Park!

“Garrison Family Theme” is a wonderful break from the tension filled mysteries of the conspiracy to a more down to earth melody played by celeste, piano and flute. Its is played rather evocatively. Another extremely powerful composition is “Arlington” (a Williams concert staple) is a grand tragic elegy played entirely on strings after a somber rendition of JFK theme on french horn played by Jim Thatcher. This cue acts as a powerful movement in the score and summarizes the emotional state of JFK’s legacy. Soliquay trumpet and a swelling orchestra beautifully wraps JFK’s’ theme in the film’s Finale cue. The ending is far from over, but Williams Triumphant theme is a wonderful tribute to the film and JFK. The album quietly ends with the JFK theme on piano.

While, JFK is a wonderful testament of Williams grand craft and perhaps his own legacy, it is well represented on this otherwise unbalanced soundtrack album. The score is dispersed through out with various source cues interspersed in between. It does disrupt the narrative flow of the music but can be programed out. The packaging is also sampled as if it were some Top secret conspiracy document and the sound quality of the score is crisp and close miked by Armin Steiner. Unfortunately, this album has been long out of print and it’s only source is the primary re-sale market. So consider yourselves lucky if you do find it.

To conclude, this is a wonderfully impressive and dynamic score that easily stands apart as one of his most ambitious scores and is an instant classic.