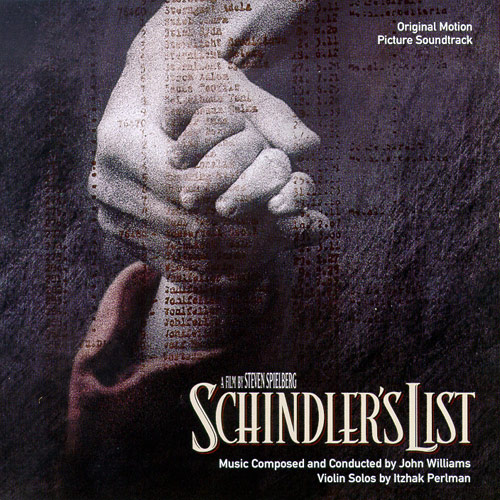 Anyone who says that Schindler’s List is not John Williams’ most touching composition to date has not really felt the full scope of this score. It deserved an Oscar not only for its association with the best film of 1993, but for the way it touches our souls without making it oversentimental. Williams has never been one to do that, and any regular composer would have made the score speak for the visual, instead of the other way around. The only time Williams has done the former is with Jaws, and there it was necessary, since the mechanical shark really couldn’t do much for us. In this score Williams uses the most heart-tugging instrument in his orchestra: a lone violin. And he takes one of the most passionate violin players to bring out that added compassion that no one on Earth possesses: Itzahk Perlman. Perlman’s playing throughout the score is possibly the best violin playing I have ever heard. If it’s at all possible I think his emotion while he performs is felt more on CD than with black-and-white visuals competing for attention.

Of course Williams cannot write a score without a memorable theme. And this one ranks as the most lyrical, the most flowing notes put on a page and translated on instruments. But he doesn’t just put this through numerous instrumentations, he has many other melodies to work with that work just as well for the scene they compliment. For instance, “Schindler’s Workforce” underscores the scene where Stern (Ben Kingsley) begins assembling a team of workers for Schindler’s factory. It starts off with the main theme, then turns into a jaunty Scherzo reminiscent of Fiddler on the Roof. It not only lightens up the situation, but gives the rest of the orchestra (i.e. woodwinds) a chance to add their touch. The tamborine also gives it a happy beat, something you wouldn’t expect in this film, but it works anyway. There is a lot of tension in the film of course, and it is translated wonderfully in the score. The scene where the Jews are in “The Bath” and are wondering if they’ll get gas or water is gut-wrenching enough to watch, but with building strings makes it almost unbearable. Then the levity afterwards simply makes you melt.

The choir singing on the various tracks is nicely done, especially on Track 6, where a boys’ choir laments over the devastation of the destruction (and the little girl in the red dress). One of the most touching renditions of the main theme comes at the end credits. This is done on piano, and each note is played with sorrow and also as a requiem for the dead. Kudos to John Williams for what was without a doubt a very trying and rewarding experience.